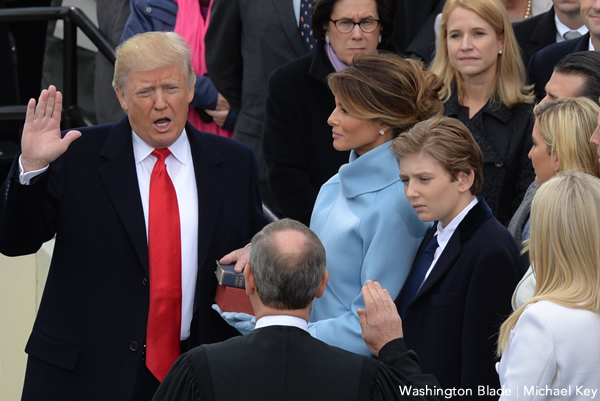 Just as President Trump took to the podium to deliver his inaugural address, a light rain began to fall on the U.S. Capitol and those on the National Mall watching his first moment as the 45th president of the United States.

Consistent with the drizzle, much of Trump’s speech echoed his campaign messages of doom and gloom. But now with the start of his presidency, Trump promised bright days ahead.

Trump’s dismal view of America included rants about rampant crime, drugs and gangs; a crumbling infrastructure; an education system that’s flush with cash but doesn’t prepare students for the future and a foreign policy that defends other nations’ borders “while refusing to defend our own.”

In a possible signal the new president would seek to shift the nation’s alliances, such as embracing stronger ties with Russia, Trump said he would seek to build new partnerships, while keeping the old, to thwart Islamic extremism.

“We will reinforce old alliances and form new ones and unite the civilized world against radical Islamic terrorism, which we will eradicate from the face of the Earth,” Trump said.

Trump also predicted expansion in what he called the “birth of the new millennium,” saying progress will consist of national unity and scientific advances.

“We stand at the birth of a new millennium, ready to unlock the mysteries of space, to free the earth from the miseries of disease, and to harness the energies, industries and technologies of tomorrow,” Trump said. “A new national pride will stir ourselves, lift our sights and heal our divisions.”

In this new America, Trump said the nation will be protected “by the great men and women of our military and law enforcement,” but also and more importantly, “protected by God.”

“Protection will lead to great prosperity and strength,” Trump said. “I will fight for you with every breath in my body and I will never ever let you down. America will start winning again, winning like never before.”

Franklin Graham, an evangelical leader who endorsed Trump, delivered one of the closing benedictions at the inauguration ceremony and said the falling rain was a good sign.

“In the Bible, rain is a sign of God’s blessing, and it started to rain, Mr. President, when you came to the platform,” Graham said. “And it’s my prayer that God will bless you, your family, your administration and may he bless America.”

After being sworn in by U.S. Chief Justice John Roberts, Trump waved from his spot on the U.S. Capitol steps and shook his fist in the air to rally his supporters. Trump embraced his family who stood by him as he took the oath of office, then shook the hand of now former President Barack Obama and former Vice President Joseph Biden.

Chad Griffin, president of the Human Rights Campaign and steadfast supporter of Hillary Clinton during the election, said in a statement his organization intends to hold the new administration accountable.

“When Donald Trump took the oath of office today, he vowed to be a servant for all Americans. We will hold him to that oath,” Griffin said. “It is more important now than ever before for us to organize, mobilize, and fight in solidarity against hate and any attempts to roll back the rights of LGBTQ people. No matter who sits in the Oval Office, HRC won’t back down an inch in the fight for full equality and the equal dignity of each and every American. Forward.”

Unlike the inauguration of Obama in 2009, whose swearing-in packed the National Mall, noticeably fewer people braved the January rain to witness the beginning of the Trump presidency. An estimated attendance of 700,000 to 900,000 people was expected for the transition of power from Obama to Trump.

Trump supporters demonstrated solidarity on the National Mall by wearing “Make America Great Again” hats and pro-Trump material from his presidential campaign. At the same time, others attending the inauguration in protest held up portraits of people of color and the message “We the People.”

Shortly after Trump began his inauguration speech, a female protester was escorted out of the event before members of the press were seated. Carrying a sign in opposition to Trump, she shouted as she was taken away Trump is a “racist” and “not legitimate.”

Four years after Obama made history during his second inaugural address by comparing the Stonewall riots to the march on Selma and asserting the nation’s journey isn’t complete until gays are treated equally under the law, Trump made no reference to LGBT rights during his speech.

For LGBT inclusion during the inaugural event, one would have to look to Senate Minority Leader Charles Schumer (D-N.Y.) in remarks he delivered as part of his introduction of the event.

“We Americans have always been a forward-looking, problem-solving, optimistic, patriotic and decent people, whatever our race, religion, sexual orientation, gender identity, whether we are immigrants or native born, whether we live with disabilities or do not, in wealth or in poverty, we are all exceptional in our commonly held, yet fierce, devotion to our country,” Schumer said.

In the aftermath of defeat for Democrats on Election Day, Schumer sought to strike a populist tone not unlike Trump’s as he decried a system he said leaves people behind and “a fractured media.” Nonetheless, Trump supporters on the National Mall could be heard jeering the New York Democrat as he delivered the introduction.

After coming to power in a campaign that stirred racist sentiment and was embraced by white supremacists, Trump appeared to tamp down the perception his ascendance is a triumph for bigotry, asserting in hearts that are open to patriotism “there is no room for prejudice.”

“It’s time to remember that old wisdom our soldiers will never forget, that whether we are black or brown or white, we all bleed the same red blood of patriots,” Trump added. “We all enjoy the same glorious freedoms and we all salute the same great American flag.”

But Trump didn’t forget his supporters, nor did they fail to support him in his remarks. Those in attendance on the National Mall could be heard shouting “Trump! Trump!” as the event began and — perhaps in response to visible protests happening away from the stage — chanting “USA! USA!”

Trump closed his address with a refrain of variations on his campaign theme of “Make America Great Again,” and his supporters could be heard joining him in his last words, which were identical to the slogan.