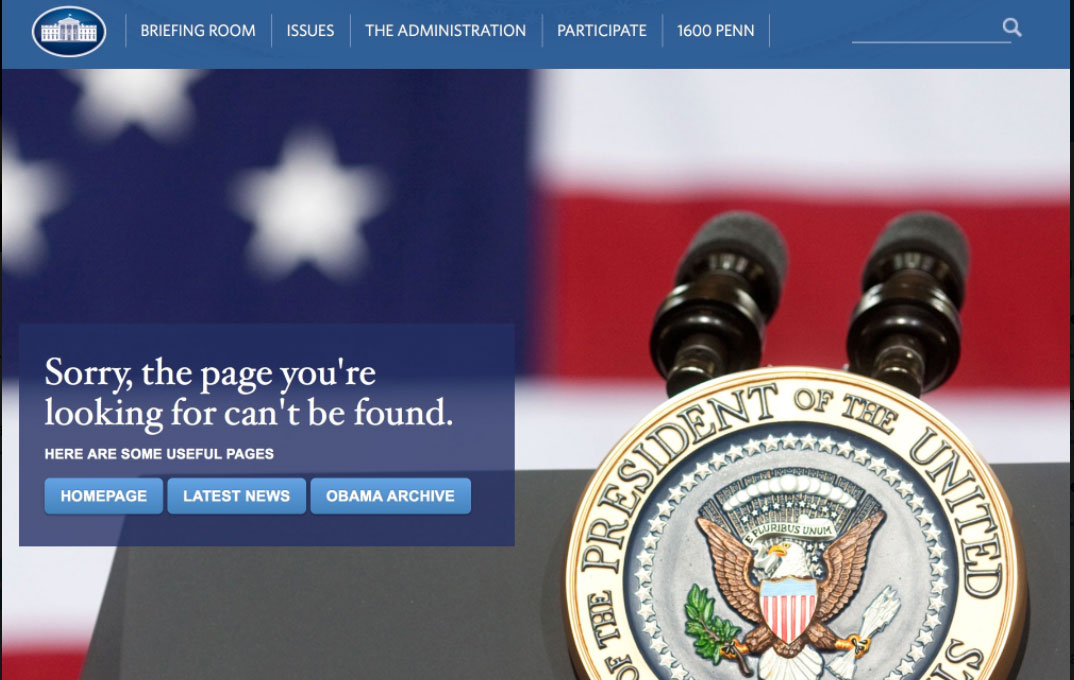 BY KAREN OCAMB  |   The Etch-a-Sketch of history shook the American consciousness and seemed to instantly erase LGBT visibility as Donald J. Trump was sworn in as the 45th President of the United States on Friday. The rain and clouds hovering over the ceremony seemed to match Trump’s inauguration speech, a rehash of the darker highlights from his campaign rallies, as the new president once again addressed his populist base and shunned the traditional soaring rhetorical praise for American values as an appeal to unify the country.

Trump-the-disrupter spat out his apocalyptic vision of the country, promising to end the “American carnage” caused by gangs, drugs and crime and pledging to “reform the world against radical Islamic terrorism, which we will eradicate from the face of the Earth.”

“January 20, 2017, will be remembered as the day the people became the rulers of this nation again,” a still bombastic Trump said as former presidents Jimmy Carter, George W. Bush, Bill Clinton and Barack Obama looked on. “The forgotten men and women of our country will be forgotten no longer. Everyone is listening to you now. You came by the tens of millions to become part of a historic movement, the likes of which the world has never seen before.”

And while Bikers for Trump may have ridden to Washington DC from all over the country, the numbers did not come close to the “tens of millions” the new president touted. In fact, President Obama left office with 60 percent approval ratings, with 65 percent saying his presidency had been a success.  Even out Fox News anchor Shepard Smith noted as America’s first black president prepared to leave the White House that the economy has been on an upswing over the past six years, thanks to Obama. Trump, meanwhile, dismissed the rating surveys as “rigged” on Tuesday after a Washington Post-ABC News poll placed him at 40 percent, the lowest of any incoming president since Jimmy Carter in 1977. NBC/Wall Street Journal poll had him at 44 percent.

It fell to Senate Minority Leader Chuck Schumer to articulate the obvious and give voice to the loyal opposition, the almost three million more voters who preferred former Sec. of State Hillary Clinton.

“We face threats foreign and domestic,” Schumer said.  “In such times, faith in our government, our institutions, and even our country can erode. Despite these challenges, I stand here today confident in this great country for one reason: you, the American people.”

Schumer got boos from the crowd but continued: “Whatever our race, religion, sexual orientation, gender identity. Whether we are immigrant or native-born. Whether we live with disabilities or do not. In wealth or in poverty, we are all exceptional in our commonly held, yet fierce devotion to our country.”

And while Schumer celebrated the transition of power, he also stressed the stakes ahead, if Trump follows through on his campaign rhetoric.

“Today we celebrate one of democracy’s core attributes: the peaceful transfer of power. And every day we stand up for core democratic principles enshrined in the Constitution. The rule of law, equal protection for all under law, the freedom of speech, press, religion. The things that make America, America,” Schumer said, perhaps resisting the urge to say “what makes America great in the first place.”

The LGBT community, along with immigrants and women and the disabled, are about to enter a world where words might not mean what they used to or what they seem to mean as they stand in stark contrast to actions taken. For instance, will Trump or his supporters call for a new McCarthy-style loyalty oath?

“At the bedrock of our politics will be a total allegiance to the United States of America and through our loyalty to our country, we will rediscover our loyalty to each other,” Trump said. “When you open your heart to patriotism, there is no room for prejudice. The bible tells us how good and pleasant it is when God’s people live together in unity. We must speak our minds openly, debate our disagreements honestly, but always pursue solidarity.”

But while Trump calls for “no room for prejudice,” the closing prayers were delivered by two staunchly anti-LGBT evangelical leaders, Franklin Graham  and Samuel Rodriguez.

During the inaugural luncheon, Trump gave a shout out to former President Bill Clinton and former Sec. of State and presidential aspirant Hillary Clinton, saying he was “very honored” to have them there and had “a lot of respect” for them for showing up. Trump also, perhaps without knowing it, referenced black motorist Rodney King and the civil disturbance of that period, when he said: “We all want the same thing, we’re all good people. Whether Republican or Democrat, we’re all gonna get along.”

Meanwhile, at least 96 people were arrested in protests against Trump’s inauguration, with DC police sometimes having to use tear gas to control the unruly crowd and vandals just blocks away from the ceremonies.

“The United States of America is your country,” Trump said during his inauguration speech, while the new administration wiped reference to LGBT from the WhiteHouse.gov website.

Here is a link to LGBT content that had existed under former President Obama.

It also appears they have abolished the Office of National AIDS Policy without explanation or indication as to what will replace it.

Meanwhile, members of the California Democratic Assembly promised to be a beacon for the nation: