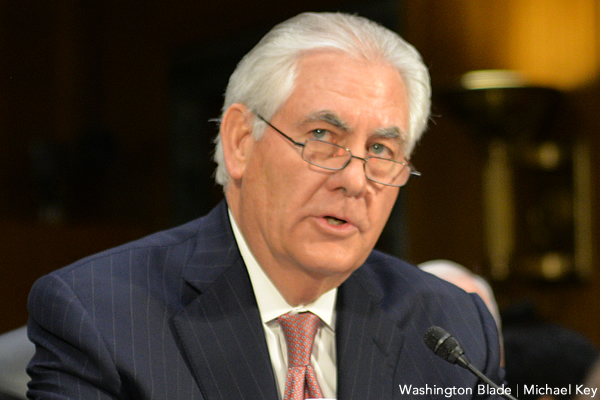 President-elect Trump’s nominee for secretary of state on Wednesday declined to specifically say whether “gay rights are human rights.”

Coons also asked Tillerson whether he believes the promotion of gay rights is “a piece of our human rights advocacy and agenda around the world.”

“That’s part of that American values that we protect,” said Tillerson.

Coons noted in his question that he previously met with a woman from Zimbabwe who received asylum in the U.S. because she was tortured “for who she was.” He also told Tillerson, who was a member of the Boy Scouts of America’s executive board when it voted to allow openly gay scouts into the organization in 2013, that he was “encouraged by his tough leadership moment.”

The promotion of LGBT and intersex rights abroad has been a cornerstone of U.S. foreign policy during President Obama’s second term.

Obama on Dec. 6, 2011, issued a presidential memorandum that directed agencies that implement U.S. foreign policy to promote LGBT and intersex rights. Then-Secretary of State Hillary Clinton on the same day delivered her “gay rights are human rights” speech in Geneva.

Tillerson on Wednesday did not say whether the Trump administration would continue the Obama administration’s policy. It also remains unclear whether the position of special U.S. envoy for the promotion of LGBT and intersex rights will remain at the State Department.

“In my work around the world, although not always easy or comfortable, it’s I think important that we include respect for the whole range of people’s relations in our menu of how we define human rights,” Coons told Tillerson.

The company in 2015 added sexual orientation and gender identity to its nondiscrimination policy. Freedom to Work, an LGBT advocacy group, two years earlier filed a complaint against ExxonMobil that alleged it showed bias against prospective employees who were gay.

A spokesperson for the Illinois Human Rights Commission told the Blade last month that a second lawsuit accusing ExxonMobil of anti-gay discrimination is “still pending.”

U.S. Sens. Marco Rubio (R-Fla.) and Jeanne Shaheen (D-N.H.) are among the committee members who raised concerns about Tillerson’s ties to Russia amid the backdrop of the Kremlin’s efforts to interfere with the 2016 presidential election.

Tillerson in 2011 signed a $300 billion agreement with Russia that would allow his company to drill for oil in the Arctic Ocean. The sanctions that the Obama administration imposed against the Kremlin in 2014 over the annexation of Crimea and other interventions in Ukraine derailed the project.

Russian President Vladimir Putin in 2013 signed a controversial law that bans the promotion of so-called gay propaganda to minors in Russia. The Obama administration late last month expelled 35 Russian diplomats from the U.S. and issued sanctions against two Russian intelligence agencies who the White House claims sought to disrupt the election.

Tillerson in his prepared statement said Russia “today poses a danger, but it is not unpredictable in advancing its own interests.” He also criticized the Obama administration for an “absence of American leadership” towards the Kremlin.

“We need an open and frank dialogue with Russia,” said Tillerson.

Corker in a statement he released after the hearing said he supports Tillerson’s nomination.

“From the beginning of this process, I have been committed to ensuring the nominee for Secretary of State receives a fair and thorough hearing, and I am incredibly impressed with how Rex Tillerson has conducted himself,” said Corker. “Based on what I know today, I believe Mr. Tillerson has the potential to be an outstanding Secretary of State, and I look forward to supporting his nomination.”

“Voices of opposition have arisen against Mr. Tillerson since his nomination, many disparaging his record on issues related to LGBT equality,” wrote Angelo in his letter. “These criticisms completely overlook — in many cases willfully — the sensitivity and sympathy Mr. Tillerson has demonstrated throughout his career in regard to cultural issues.”

An email that the Democratic National Committee released after the hearing contained the subject line, “Exxon Has A Poor Track Record On LGBTQ Issues.”

It cited, among other things, a 2015 report that indicates ExxonMobil is the “largest investor” in Qatar. The small Gulf country that borders Saudi Arabia is among the more than 70 nations in which consensual same-sex sexual relations remain criminalized.

— from the National Gay Media Association and Washington Blade