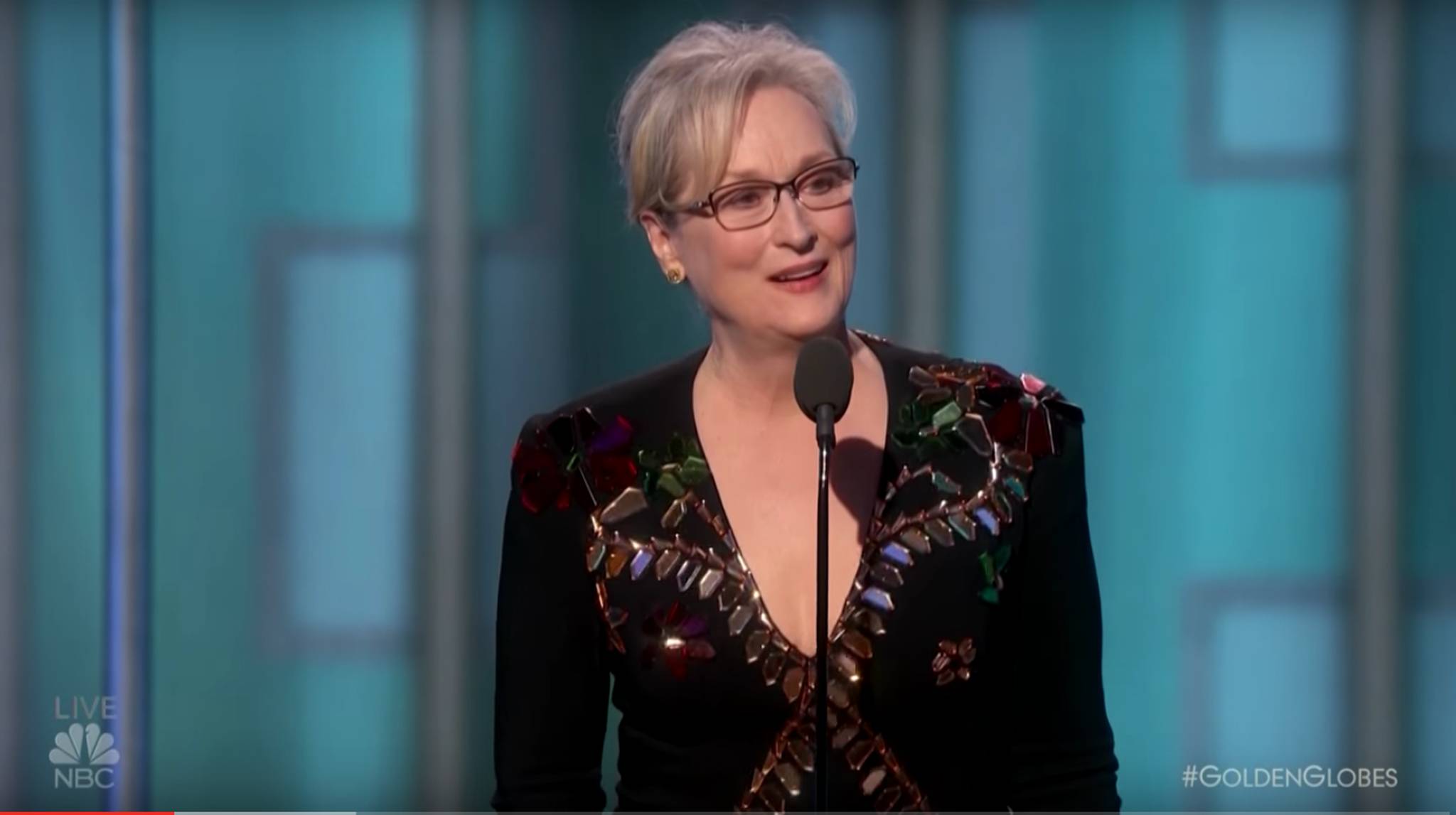 BY KAREN OCAMB  |  Like so many in the audience at the Golden Globes Sunday night, I held my breath in anticipation of what Meryl Streep would say in accepting the Cecile B. DeMille Award. And like so many others, I had seen most of the Streep movies encapsulated in the introductory video—but I was stuck on the clip from Tony Kushner’s brilliant Angels in America. Playing the ghost of Ethel Rosenberg, who closeted gay lawyer Roy Cohn was instrumental in executing during the Red Scare era, Streep tells Al Pacino’s character, dying of AIDS: “I came to forgive, but all I can do is take pleasure in your misery, hoping I would get to see you die more terrible than I did.”

Streep did not disappoint, not in her many films, not in her acceptance speech. “An actor’s only job is to enter the lives of people who are different from us and let you feel what that feels like,” Streep said.

But it is her admonishment of President-elect Donald Trump, without ever speaking his name, that is getting the most attention.

“[T]here was one performance this year that stunned me. It sank its hooks in my heart, not because it was good, it was — there’s nothing good about it. But it was effective and it did its job. It made its intended audience laugh and show their teeth,” Streep said.

“It was that moment when the person asking to sit in the most respected seat in our country imitated a disabled reporter, someone he outranked in privilege and power and the capacity to fight back. It, it kind of broke my heart when I saw it and I still can’t get it out my head because it wasn’t in a movie. It was real life. And this instinct to humiliate when it’s modeled by someone in the public platform, by someone powerful, it filters down into everybody’s life because it kind of gives permission for other people to do the same thing,” she continued before a rapt audience in the room and via televisions around the world.

“Disrespect invites disrespect. Violence incites violence. When the powerful use their position to bully others, we all lose. OK, go on with that thing. OK, this brings me to the press. We need the principled press to hold power to account, to call them on the carpet for every outrage.” Applause.

Applause for the press? Yes, Hollywood needs the press for publicity for their product. But there has also been righteous pushback in this celebrity-driven culture when the “press” or those who claim to represent the press, overstep the bounds of civility. The hounding of Princess Diana comes to mind, as well as the blurring of lines between tabloid/click bait headlines and real investigative reporting that needs to be “juicy” to get read.

Celebrity Apprentice Reality TV star and producer Donald Trump won the presidency of the United States, in part, by running against the “corrupt” media, one of the reasons the crowd laughed when Trump mocked New York Times disabled reporter Serge Kovaleski.

The whole episode—reported in detail by the rumor-debunking website Snopes.com— happened because Trump cited a Sept. 18, 2001 report by Kovaleski, then with the Washington Post, which gave a passing reference to “people who were allegedly seen celebrating the attacks.”  Trump used that to verify his widely criticized and debunked claim that “thousands and thousands of people [in Jersey City, New Jersey] were cheering as [the World Trade Center] was coming down.”

After Kovaleski noted that “there were never any reports (not even unsubstantiated ones) of ‘thousands’ or even ‘hundreds’ of people celebrating the 9/11 attacks in the New York area,” Snopes reports, “Trump countered with a retort in which he criticized the journalist for attempting to ‘back away’ from his previous article and visually mocked Kovaleski’s physical appearance.”

It was that Trump performance that rattled Streep and so many others. With her Golden Globe acceptance speech, Meryl Streep gave voice to millions of outraged, frustrated and frightened voters who believed Hillary Clinton would have made a better president—almost three million more voters than Trump.

Streep spoke for those of us who cherish our identities, but, as she noted, “really belong to the most vilified segments of American society right now. Think about it: Hollywood, foreigners and the press.” Others in that room and at home watching who might also feel vilified under a Trump administration include people of color, LGBT people and American Muslims and Jews.

Streep’s sincere recognition of both Kovaleski’s disability and his profession was incredibly important. A reporter’s embrace of an identity does not automatically disqualify the veracity of the reporting. I identify as a member of the LGBT community, which makes me responsible for covering that community as fairly and accurately as possible, from pro-life conservative Republicans to pro-choice socialist Democrats, and all the freedom of expression choices in between and beyond. But being an LGBT-identifying journalist does not make me less patriotic or entice me to fudge the truth for my people or my country. A lie is a lie is a lie and “normalizing” lies erodes democracy for all of us.

Streep raised this during her speech. Holding those in power accountable, said Streep, is “why our founders enshrined the press and its freedoms in our constitution. So I only ask the famously well-heeled Hollywood foreign press and all of us in our community to join me in supporting the Committee to Protect Journalists, “because we’re going to need them going forward and they’ll need us to safeguard the truth.”

Last November, the CPJ, which endeavors to protect journalists around the globe, became concerned about protecting press freedom in America. CPJ wrote a letter to Vice President-elect asking for a meeting.

“During the presidential campaign and since its conclusion, the climate for journalists has deteriorated sharply. President-elect Trump has obstructed major news organizations, attacked reporters by name, and contributed to a threatening climate for journalists covering the election,” the letter read, in part. “These actions in the United States set a terrible example for the rest of the world, where governments routinely justify intervention in the media by citing national security, and where vilification of the press by public figures creates a divisive environment ripe for attacks on press freedom.”

Perhaps people don’t know this—but like police, firefighters and other first responders, journalists rushtoward the scene of a crime or an explosive event. It is our job to get and report the news so people will know what’s going on and can make electoral and life and death decisions accordingly. It is a noble profession, demeaned only by the bad apples among us and by demigods who want to manipulate the populace.

And those of us who belong to “the most vilified segments of American society right now” must be especially vigilant as we have entered an Orwellian, upside-down universe. Consider Trump senior advisor Kellyanne Conway’s spat with CNN anchor Chris Cuomo, saying Trump deserves the benefit of the doubt when he says he denies mocking Kovaleski.

“You have to listen to what the president-elect has said about that. Why don’t you believe him? Why is everything taken at face value?” she asked Cuomo.“You can’t give him the benefit of the doubt on this and he’s telling you what was in his heart? You always want to go by what’s come out of his mouth rather than look at what’s in his heart.”(Emphasis mine)

And what do we see when we look at Trump’s heart? Perhaps his wife Melania Trump gave us some insight last October in an interview with CNN’s Anderson Cooper after the whole Access Hollywood “pussy-grabbing” incident with Billy Bush.

“Sometimes I said I have two boys at home — I have my young son and I have my husband,” Melania Trump said.

That would explain Trump’s early Monday morning tweet calling Streep “one of the most over-rated actresses in Hollywood.” If HE can’t win membership in the Hollywood club from which he so desperately craves adulation, he will try to diminish those the club celebrates as an icon.

Ethel Rosenberg’s son Robert Meeropol told Democracy Now that Meryl Streep looked like his mother in her Angels in America performance. Rosenberg’s death in the electric chair was ghastly, ordered by Cohn, even though she had no real part in the crime for which she and her husband were executed as traitors. As the assistant prosecutor, Cohn coerced and coached his mother’s brother into fabricating a story against her, Meerpol said, citing an FBI memo. “[Cohn] was in charge of twisting David Greenglass’s arm,”  He wants his mother exonerated.

Before his death from AIDS, Roy Cohn was Donald Trump’s mentor and lawyer for 13 years. As both the Washington Post and CNN reported Cohn had a tremendous influence on Trump’s brash style.

Maybe, like me, Trump got stuck on that clip of Streep portraying Ethel Rosenberg at the bedside of  the dying Roy Cohn. Interestingly, just as Streep called for actors to portray empathy and human compassion in their work, so too does Streep’s Rosenberg seem to forgive Cohn after he apologizes for the harm he’s done. In an amazing, albeit quiet act of forgiveness, she says the Kaddish over him—only to have Pacino’s Cohn sit straight up in bed and laugh at her for being taken in.

Might that be an example of what we might expect from believing what’s in Trump’s heart and not his words?