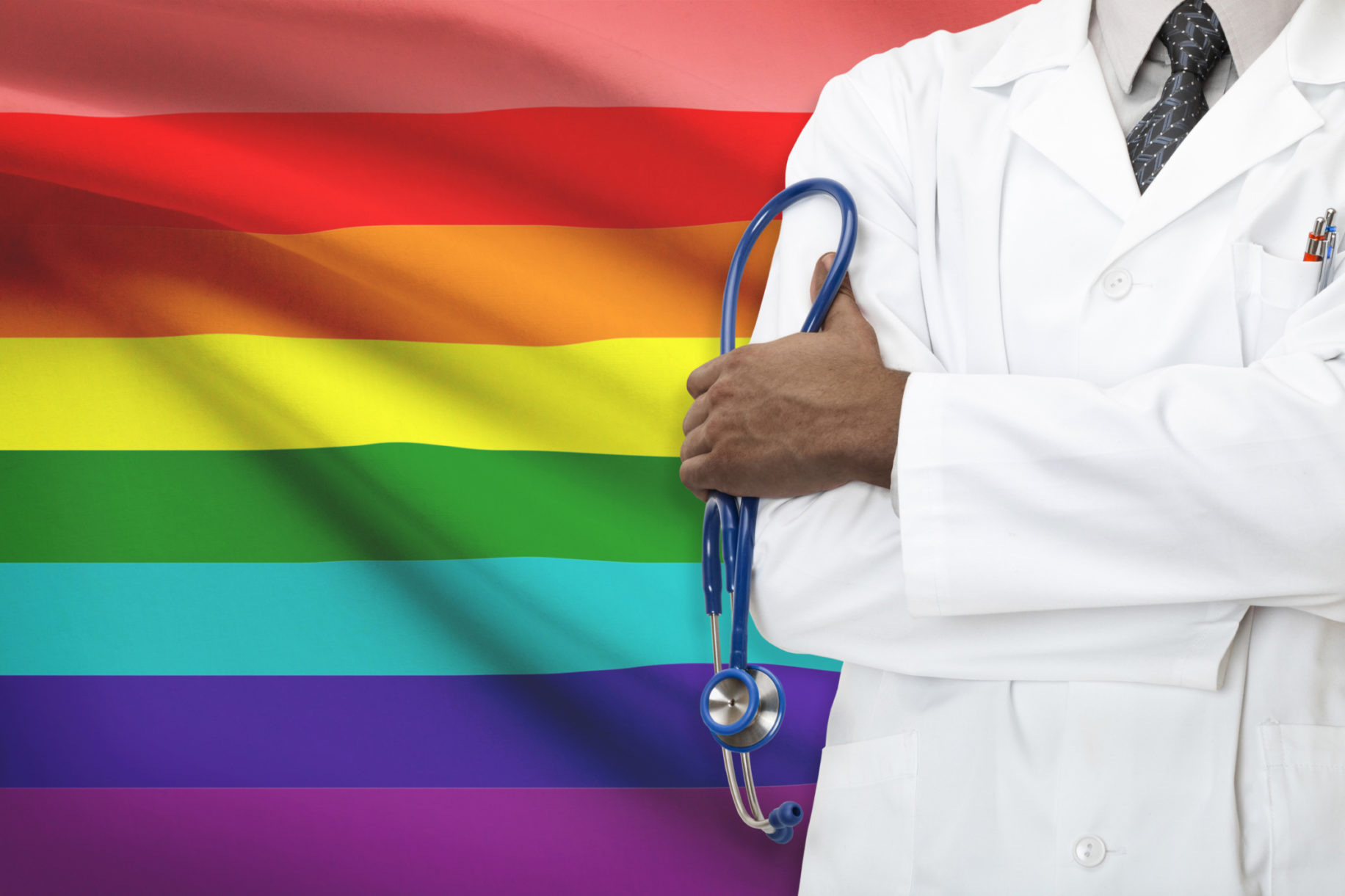 BY MATTHEW S. BAJKO  |  Facing harassment at her old job, Sunnyvale resident Amy Krakar opted to quit last summer and work as a freelance graphic designer from home. With the cost to maintain her old health insurance plan $800 a month, she opted instead to enroll with Kaiser Permanente through Covered California, the state-run exchange created by the federal Affordable Care Act.

Ensuring she retained access to health insurance at a reasonable cost was a high priority for Krakar, 48, as she began taking testosterone nearly nine months ago to begin transitioning from female to male. She is now in the process of legally changing her name to Jamie and updating her documents so her gender is listed as male.

Krakar, who is using female pronouns for now, also has chronic kidney disease, which requires regular checkups to monitor her condition to avoid kidney failure.

“For this price I get a decent out-of-pocket maximum and lab, doctor visit and pharmacy costs that don’t break the bank,” Krakar told the Bay Area Reporter. “In the past when I was between jobs and when I went back to school a few years ago I went without coverage because I couldn’t afford it. Now going without coverage would be potentially catastrophic for my health, so it’s not really an option.”

As President-elect Donald Trump prepares to take office Friday, vowing to repeal the ACA, better known as Obamacare, as one of his first priorities, but remaining vague on what he and the Republicans who control Congress will replace it with, Krakar said she is worried about what that will mean for her and other transgender individuals who rely on the law for access to their health care.

Due to the ACA, federal regulators adopted a rule prohibiting health insurers from denying transgender individuals preventative services that didn’t correlate with their new gender, such as transmen who still need pap smears or mammograms. Nor could they deny insurance to people with pre-existing conditions, a barrier that had prevented many transgender people from being able to access health care.

“Something I am worried about is if the new government is able to take away the federal subsidies and mess with the ACA that way,” said Krakar. “I am feeling a little frightened because, before the ACA, transgender people didn’t have many rights in health care.”

According to a report released Tuesday by the nonpartisan Congressional Budget Office, 18 million Americans could lose their insurance by 2018 and the cost of premiums would increase substantially if many of the ACA’s provisions are gutted. A full repeal of the law without it being replaced would see 32 million people losing their health insurance by 2026, found the report.

Because no data is collected on the sexual orientation or gender identity of the people signing up for health insurance through the ACA exchanges, it is unknown how many LGBT people have done so. Anecdotal evidence, however, indicates the LGBT community has greatly benefited from it.

Rick Zbur, executive director of the LGBT advocacy organization Equality California, estimated that of the 22 million people who gained insurance through the ACA’s expansion of Medicaid, known as Medi-Cal in California, 2.2 million are likely LGBT people.

“The ACA also has benefited our community in a more significant way than the general population because, due to discrimination and a lack of acceptance, LGBT people face greater health disparities than the rest of the public,” said Zbur.

EQCA has been asking LGBT people to share with it via an online survey, found at https://equalityca.bsd.net/page/s/aca-stories2, how the ACA has helped them and their family. It also sent a letter this month to members of California’s congressional delegation to urge them not to repeal the ACA without replacing it.

“From expanding Medi-Cal to providing subsidies through Covered California, from eliminating discrimination because of sexual orientation or gender identity to requiring data collection about the LGBT community – the ACA has helped countless members of California and the nation’s diverse LGBT population,” wrote Zbur in an email to EQCA members last week. “For the first time, millions of LGBT people obtained quality, affordable health care coverage under the ACA despite HIV status or other pre-existing conditions or because they could not afford coverage before.”

A 2015 report from the Urban Institute, using data from the Health Reform Monitoring Survey, concluded that from mid-2013 to early 2015, the uninsured rate for LGB people (the survey did not track transgender people) was cut in half – from 21.7 percent to 11.11 percent.

Studies have long shown that LGBT people are more likely to be low-income and the community as a whole less likely to have health insurance, noted Katie Keith, a steering committee member of Out2Enroll, which has worked to sign up LGBT people for insurance under Obamacare.

“Having access to subsidies made a significant difference in being able to get health care,” said Keith, thus losing the ACA “would be devastating, to be honest with you.”

While the law didn’t start out as perfect for LGBT people, acknowledged Keith, there were “so many small and big changes we have gotten over time that meant an incredible amount to LGBT people, particularly transgender people.”

One of the biggest changes went into effect last year for Medicaid and this year for private plans, which bars insurers from having categorical trans exclusions in insurance plans. She also pointed to the guidance issued in 2014 by the Department of Health and Human Services that said family plans had to include same-sex households.

“If they try to repeal the ACA without any sense of replacement that might be a huge problem for LGBT people just like the rest of the country,” said Keith.

It is not just LGBT individuals that would be impacted by the loss of the ACA; LGBT health centers across the country are also worried about the negative consequences they could suffer from the law’s repeal.

The Los Angeles LGBT Center and the API Wellness Center in San Francisco, which both won designation in recent years as Federally Qualified Health Centers, would be particularly impacted, as many of the clients they now see were able to obtain health insurance due to the ACA.

“They get paid through the federal government thanks to the ACA as a result of the Medicaid expansion especially,” said Amanda Wallner, director of the California LGBT Health and Human Services Network, an advocacy group for 60 organizations across the state.

Wallner, a lesbian who formerly worked for the LA center as its policy and operations manager, said any service provider offering health programs has been impacted by the ACA and has a stake in seeing what becomes of the law.

“Our entire health care landscape has been shifted by the ACA,” she noted. “So we are living in a world where you have gotten used to low-income Californians being able to qualify for Medi-Cal and applying for private insurance because of the Covered California exchange, whereas before so many people were uninsured or delayed seeking medical attention.”

Over the last several years the API Wellness Center remodeled its main clinic on Polk Street, which is expected to serve 4,000 patients this year, and will be opening a satellite clinic inside the LGBT Community Center in April. Last week it filed its application to be recertified as an FQHC, which it expects will be approved. Its initial grant under the program was $650,000 per year.

But with the ACA repeal looming, the nonprofit health provider has over the last year negotiated directly with health insurers to contract directly with them. And this year API Wellness hopes to join Healthy SF, the city’s health insurance program.

Sixty percent of its 600 patients it currently sees is covered by Covered California or by the expansion of Medi-Cal, said Dr. Tri Do, API Wellness Center’s chief medical officer.

“My biggest concern is for our patients,” Do told the B.A.R. in terms of the ACA repeal plans. “We see a lot of folks who rely on these public forms of insurance. It will not just impact us but our clients’ ability to get x-rays, laboratory tests and see specialists as well.”

When it first achieved full FQHC status in 2013, the LA center also received a $650,000 grant, which it said at the time was funded by the ACA, in order to provide medical care to 4,000 additional patients, particularly low-income people on Medicaid. The federal funding incrementally increased to more than $1 million by 2016.

It won recertification last year and expects to see its funding allocation continue to increase through January 31, 2019. As of February 1st, its new grant amount will total $1,745,279.

And since January 2014 the center estimates it has received $300,000 directly from Covered California.

“The future of all that is uncertain with what is going to happen with Medi-Cal expansion and Covered California,” said Christopher Brown, the LA center’s director of health and mental health services. “A number of our clients have expressed concern and they are nervous if they are going to be able to maintain their insurance. If it has come through Medi-Cal expansion or they have gotten insurance through Covered California, they are concerned it could go away.”

Due to the ACA, the center has been able to provide life-saving primary care to its clients, said Brown.

“It has been a game changer for many of our clients,” he said.

LGBT advocates continue to encourage people to sign up for coverage in 2017 through the ACA – the deadline to enroll is January 31 – as most do not expect to see immediate changes to the program. Instead, they believe it will be several years before it is replaced.

“We are encouraging people to not delay getting the health care they need,” said Do. “Not only because of the health consequences, but in two years when folks are saying these benefits will go away, they will have even fewer options.”