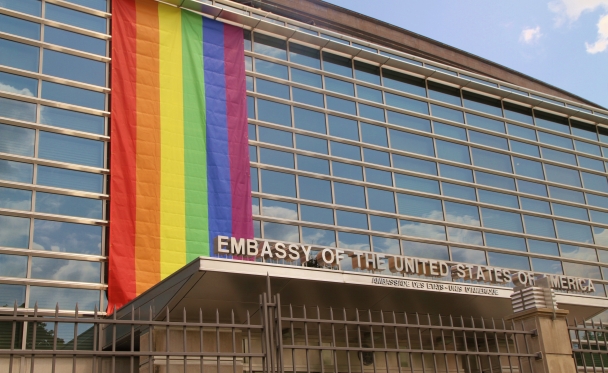 “It would look bad for Trump personally and for his administration more broadly if they were to suddenly just say no more Pride flags on embassies, no more Pride celebrations, ambassadors should not march,” he said during a panel at the Gay and Lesbian Victory Institute’s International LGBT Leaders Conference that took place at the Washington Hilton. “I just can’t quite imagine he would do that because it would look bad for him and it’s about the way he is viewed personally.”

Guest, who is a senior advisor for the Center for Global Equality, is the first openly gay ambassador confirmed by the U.S. Senate. He represented President George W. Bush’s administration in Romania from 2001-2004.

Tamara Adrián, the first openly transgender person elected to the Venezuelan National Assembly, was among the more than 100 elected officials and activists who attended the panel.

“There’s no turning back,” said Osius, speaking to his fellow panelists from the Vietnamese capital of Hanoi via Skype.

‘We can continue doing what we do’ under Trump

Argentina, the Netherlands, the Human Rights Campaign and the Arcus Foundation are among the contributors to the Global Equality Fund, a public-private partnership the State Department manages with the U.S. Agency for International Development that seeks to promote LGBT rights around the world. Berry has traveled to Jamaica, Honduras, Ugandaand more than 40 other countries since he assumed his post within the State Department’s Bureau of Democracy, Human Rights and Labor in April 2015.

The U.S. in August 2015 co-sponsored the first-ever U.N. Security Council meeting on an LGBT-specific issue that focused on the so-called Islamic State’s persecution of LGBT Syrians and Iraqis. USAID’s rule that formally bans contractors from discriminating on the basis of sexual orientation and gender identity took effect in October.

Osius, Gifford and Brewster are among the openly gay ambassadors that Obama appointed during his second term.

Trump has previously noted ISIS, which has publicly executed Iraqi and Syrian men who were accused of sodomy, and other Islamic extremist groups pose a threat to LGBT people. Vice President-elect Pence opposed U.S. efforts to promote gay rights abroadwhen he was a member of Congress.

It remains unclear whether the promotion of LGBT rights abroad will factor into the Trump administration’s foreign policy. Advocates with whom the Washington Blade has spoken since the election have urged the president-elect to leave current U.S. policy intact.

“I’m going to continue to do what I do as long as they let me,” said Osius during Thursday’s panel. “It will be hard to maintain the same momentum, but I think we can continue doing what we do.”

Gifford, who married his husband at Copenhagen City Hall in October 2015, acknowledged “we are undergoing a presidential tradition right now.”

“If we’re not visible, you’re giving up,” said Brewster.

Obama’s 2013 decision to nominate Brewster as the next U.S. ambassador to the Dominican Republic sparked controversy among the country’s religious leaders.

Then-Cardinal Nicolás de Jesús López Rodríguez of the Archdiocese of Santo Domingo described Brewster — who is married to Bob Satawake — as a “faggot” during a press conference that he held after Obama nominated him. Dominican advocates maintain that Brewster and Satawake have raised visibility around LGBT issues in spite of the criticism they have faced.

Moodie-Mills during the panel noted the Obama administration has faced criticism over its failure to nominate a lesbian, bisexual, trans person or an LGBT person of color to an ambassadorship. The panelists acknowledged this criticism.

Brewster, who noted his husband is Native American, said he is “confident” that Hillary Clinton would have nominated an openly lesbian woman to become an ambassador if she were elected. Gifford conceded he is “very frustrated with the lack of diversity within the State Department.”

“It continues to be an issue,” he said.

— special to The Pride LA from the National Gay Media Association and Washington Blade.