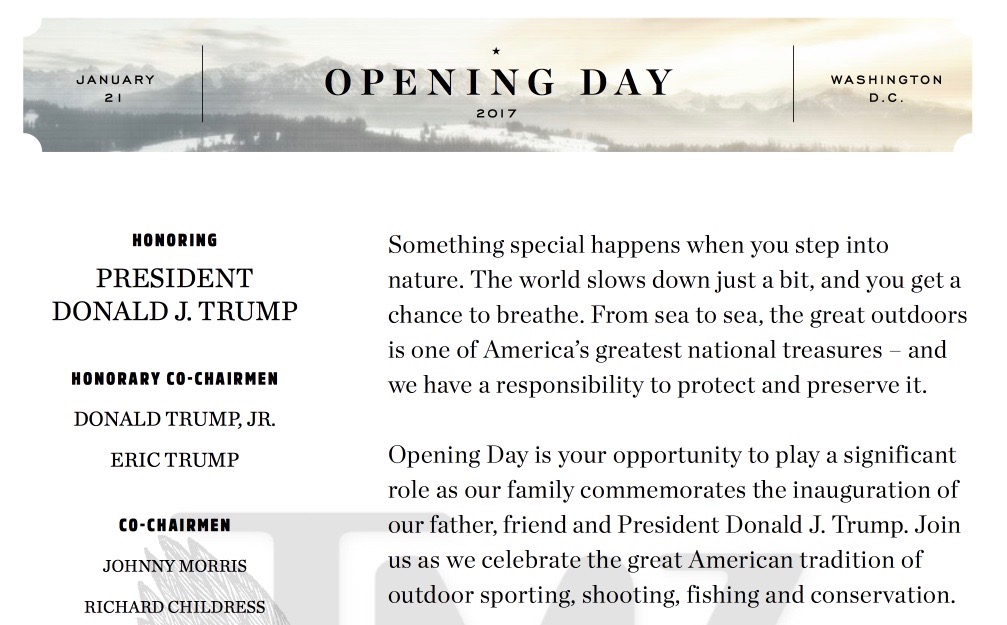 BY KAREN OCAMB  |  The Trump family just can’t seem to stop brazenly marketing and selling themselves to the highest bidder. President-elect Donald Trump shirks off the bi-partisan tradition of caring about real and perceived conflicts of interest, including divesting his business holdings to not violate the Emoluments Clause, the Constitutional provision that prohibits the president from accepting anything of value from foreign governments.

Trump takes the Oath of Office on Jan. 20, but signals are already being sent that the future president can be accessible, for a price. ThinkProgress reported Monday that under pressure from members of the Trump Organization, the Kuwaiti embassy abruptly cancelled “a regularly held the event” at the Four Seasons in Georgetown and switched its National Day celebration to the Trump International Hotel in Washington DC.

Trump’s troops are also trying to gin up the access-for-cash theme post-Inauguration, as well, according to TMZ, which first reported the draft invitation to a massive party the day after the inauguration. The Center for Public Integrity confirmed the invitation under the headline: “Donald Trump’s sons behind nonprofit selling access to president-elect.

The invitation for “Opening Day” at the Walter E. Washington Convention Center in D.C. offers several packages, including theBALD EAGLE package for $1,000,000 that includes “Private reception and photo opportunity for 16 guests with President Donald J. Trump; Four autographed guitars by an Opening Day 2017 performer; Elite Hunter’s Package with commemorative custom details – Multi-day hunting and/or fishing excursion for 4 guests with Donald Trump, Jr. and/or Eric Trump, and team,” among other goodies.

TMZ also reports that “it’s still not clear if President Trump will attend … they’re all working on the details, and if he’s not there it could affect price. That said, the event is legit and the Trump family is behind it.”

The proceeds from this event will ostensibly be distributed to unnamed sportsmen and “conservation charities,” with donors to the newly Texas-based nonprofit, lead by Trump’s sons, remaining anonymous, according to The Center for Public Integrity.

Anyone remember how Trump’s promotion of unproven “pay-for play” links between Sec. of State Hillary Clinton and the Clinton Foundation and her paid speeches before Goldman Sachs lead to the ubiquitous label “Crooked Hillary?” Now Trump wants to fill his Cabinet with Goldman Sachs alumni, and blatantly flaunts conflict of interest protocols with not so much as a whimper of misgiving from his “populist” followers.

But while the LGBTQ community both here and abroad brace for a Trump presidency (please see Nathaniel Frank’s excellent essay “Why Silence Equals Death in the Age of Trump,”) there is another issue not receiving as much attention that also wears heavily on the LGBTQ soul – animal rights. Before the election, the Humane Society Legislative Fund warned  of possible dire consequences should Trump and his troops hold the reigns of power: