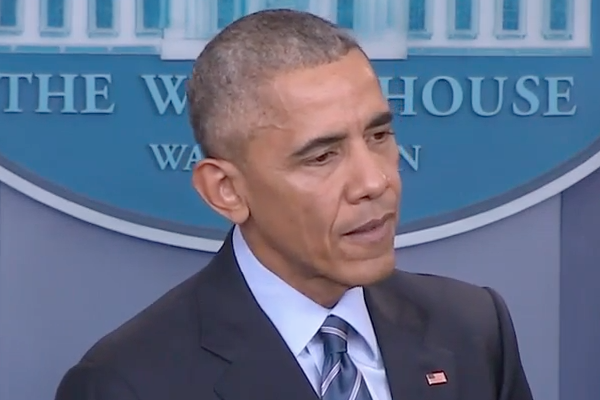 BY CHRIS JOHNSON  |  Amid growing revelations that Russia engaged in cyberattacks on the United States to influence the election in favor of Donald Trump, President Obama said Russia can only succeed in changing America if the nation adopts values like believing it’s OK to “discriminate against people because of their faith or what they look like.”

Obama made the remarks Friday during his final news conference of 2016 when asked if he would declassify intelligence briefings revealing Russia’s role in hacking the emails of the Democratic National Committee and Hillary Clinton campaign chair John Podesta — as well as information on whether Vladimir Putin himself was responsible for directing it.

“They can impact us if we abandon our values,” Obama said. “Mr. Putin can weaken us just like he’s trying to weaken Europe if we start buying into notions that it’s OK to intimidate the press, or lock up dissidents, or discriminate against people because of their faith or what they look like.”

Although Obama didn’t explicitly mention anti-LGBT discrimination, such persecution is among the human rights violations in Russia. The State Department’s 2015 report on Human Rights Practices found “continuing violence against LGBTI individuals” and LGBT activists who reported “threats and attacks in public” to which the police often won’t respond.

In 2013, Russia enacted a notoriously anti-gay law criminalizing the “propaganda” of non-traditional sexual relations to minors, which effectively limits the rights of free expression to advocate for LGBT people.

Obama made an implicit comparison between Putin and Trump. The president-elect campaigned on criticizing the media as “dishonest,” a pledge to ban Muslims from entering the United States and demonizing Mexicans as criminals and rapists.

But Obama also cautioned against placing too much weight on the impact of Russia on the election, saying the real problem in the United States is a “hyper-partisan” political culture.

“The Russians can’t change us or significantly weaken us,” Obama said. “They are a smaller country, they are a weaker country, their economy doesn’t produce anything that anybody wants to buy except oil and gas and arms. They don’t innovate.”

Citing a poll by the Economist and YouGov finding a growing number of Republicans, now 37 percent, approve of Putin, Obama quipped, “Ronald Reagan would roll over in his grave.”

“And how did that happen?” Obama added. “It happened in part because for too long, everything that happens in this town, everything that’s said is seen through the lens of does this help or hurt us relative to Democrats or relative to President Obama. And unless that changes, we’re going to continue to be vulnerable to foreign influence because we’ve lost track of what it is that we’re about and what we stand for.”

In the aftermath of an NBC News report that Putin himself was responsible for directing the cyberattacks, Obama initially declined to say whether the order came from Putin. Pressed on the issue, Obama conceded, “Not much happens in Russia without Vladimir Putin.”

“This is a pretty hierarchical operation,” Obama said. “Last I checked, there’s not a lot of debate and democratic deliberation, particularly when it comes to policies directed at the United States. We have said and I will confirm that this happened at the highest levels of the Russian government and I will let you make that determination as to whether there are high-level Russian officials who go off rogue and decide to tamper with the U.S. election process without Vladimir Putin knowing about it.”

On the issue of whether cyberattacks directly influenced the vote counts on Election Day in favor of Donald Trump, Obama said “we feel confident that that didn’t occur and that the votes were cast and they were counted.”