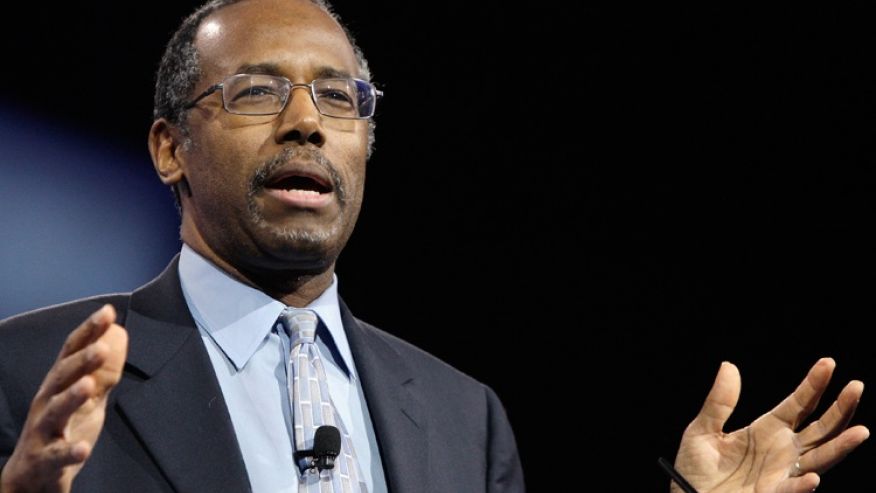 BY CHRIS JOHNSON  |  Donald Trump has made official his selection of Ben Carson as head of the Department of Housing & Urban Development — someone who has made vehemently anti-LGBT comments and expressed opposition to non-discrimination laws.

Media outlets reported late last month the conservative commentator and John Hopkins University neurosurgeon would be Trump’s choice to oversee the nation’s policy on housing and metropolises, but the president-elect waited until Monday to declare the choice formally. Carson, formerly Trump’s competitor for the Republican presidential nomination, endorsed the president-elect early on after dropping out of the race.

“I am thrilled to nominate Dr. Ben Carson as our next secretary of the U.S. Department of Housing & Urban Development,” Trump said. “Ben Carson has a brilliant mind and is passionate about strengthening communities and families within those communities. We have talked at length about my urban renewal agenda and our message of economic revival, very much including our inner cities. Ben shares my optimism about the future of our country and is part of ensuring that this is a presidency representing all Americans. He is a tough competitor and never gives up.”

Carson, who has called the LGBT community “a few people who perhaps are abnormal” and undeserving of equal protection under the law, has animated his political career with comments disparaging anti-LGBT people.

During the Republican National Convention, Carson said during a luncheon before the Florida delegation that transgender people represent the “height of absurdity.”

“You know, we look at this whole transgender thing,” Carson said. “I got to tell you: For thousands of years, mankind has known what a man is and what a woman is. And now, all of a sudden we don’t know anymore. Now, is that the height of absurdity? Because today you feel like a woman, even though everything about you genetically says that you’re a man or vice versa?”

In an interview last year on Fusion, Carson said transgender people should be forced to use their own bathrooms, not public facilities, because it’s “not fair for them to make everybody else uncomfortable.”

On the campaign trail last year, Carson waxed nostalgic for the days of “Don’t Ask, Don’t Tell,” saying people who are gay in the military “don’t need to talk about that, we need to talk about how we eliminate the enemy.” Carson also expressed opposition to transgender people in the armed forces and said “deal with the transgender thing somewhere else.”

In 2013, controversy erupted when Carson, then a rising star in the Republican Party, compared on Fox News gay rights advocates seeking to legalize same-sex marriage to pedophiles in the North American Man/Boy Love Association.

“My thoughts are that marriage is between a man and a woman,” Carson said. “It’s a well-established fundamental pillar of society. And no group, be they gays, be they NAMBLA, be they people who believe in bestiality — it doesn’t matter what they are. They don’t get to change the definition.”

Carson was set at the time to deliver a keynote speech at the commencement for Johns Hopkins University’s medical school. After the remarks, a group of students and faculty circulated a petition saying Carson was an “inappropriate choice” and should be removed as commencement speaker. Carson apologized “if anybody was offended” and delivered a letter indicating he’d withdraw from the ceremony.

Chad Griffin, president of the Human Rights Campaign, decried the selection of Carson as HUD secretary based on the anti-LGBT comments he has made over the course of his career.

“The secretary of housing and urban Development is charged with enforcing the U.S. fair housing laws that could prove challenging given that Ben Carson doesn’t even believe LGBTQ people exist,” Griffin said in statement. “Throughout his failed presidential campaign, Carson ran on a platform on inequality, and, if nominated, his hateful views could have disastrous effects on LGBTQ people. As a community already faced with housing insecurity, we need an ally, not an agitator, who will protect every American’s right to a safe place to lie down each night.”

In 2015, Carson penned an op-ed for the Washington Times criticizing the Obama administration for practices under the Fair Housing Act of “disparate impact” lawsuits — claims that discrimination is taking place in housing without expressed intent to discriminate.

“These government-engineered attempts to legislate racial equality create consequences that often make matters worse,” Carson said. “There are reasonable ways to use housing policy to enhance the opportunities available to lower-income citizens, but based on the history of failed socialist experiments in this country, entrusting the government to get it right can prove downright dangerous.”

The Fair Housing Act has served as the basis of a 2012 rule from HUD prohibiting anti-LGBT discrimination in federally funded housing for low-income people. Earlier this year, HUD clarified that rule prohibits homeless shelters from turning away transgender people based on their gender identity.

As HUD secretary, Carson has authority to rescind that rule in its entirely — although that process would take political capital and time to undo — or institute a religious exemption for the rule that could substantially limit its reach.

Laura Durso, senior director of LGBT research and communications at the Center for American Progress, expressed alarm that Carson would be in charge of non-discrimination laws he “doesn’t believe in but will now be tasked with enforcing.”

“Discrimination against LGBT homeowners, renters and people experiencing homelessness is widespread and dangerous, and HUD is the federal agency charged with fighting it,” Durso said. “Carson’s hostility towards the LGBT community raises serious questions about whether he will enforce protections keeping LGBT people from being denied shelter or thrown out of their homes, simply because of who they are.”

Carson is the latest choice by Trump for a top administrative post who lacks any experience in the position to which the designee has been named. Julian Castro, the current HUD secretary, was previously mayor of San Antonio, and his predecessor Shaun Donovan, headed the New York City Department of Housing Preservation & Development.

House Minority Leader Nancy Pelosi (D-Calif.) said in a statement Carson is a “disconcerting and disturbingly unqualified choice” as top administrator of HUD.

“Our country deserves a HUD secretary with the relevant experience to protect the rights of homeowners and renters, particularly in low income and minority communities, and to ensure that everyone in our country can have access to safe and affordable housing without facing discrimination or homelessness,” Pelosi said. “There is no evidence that Dr. Carson brings the necessary credentials to hold a position with such immense responsibilities and impact on families and communities across America.”