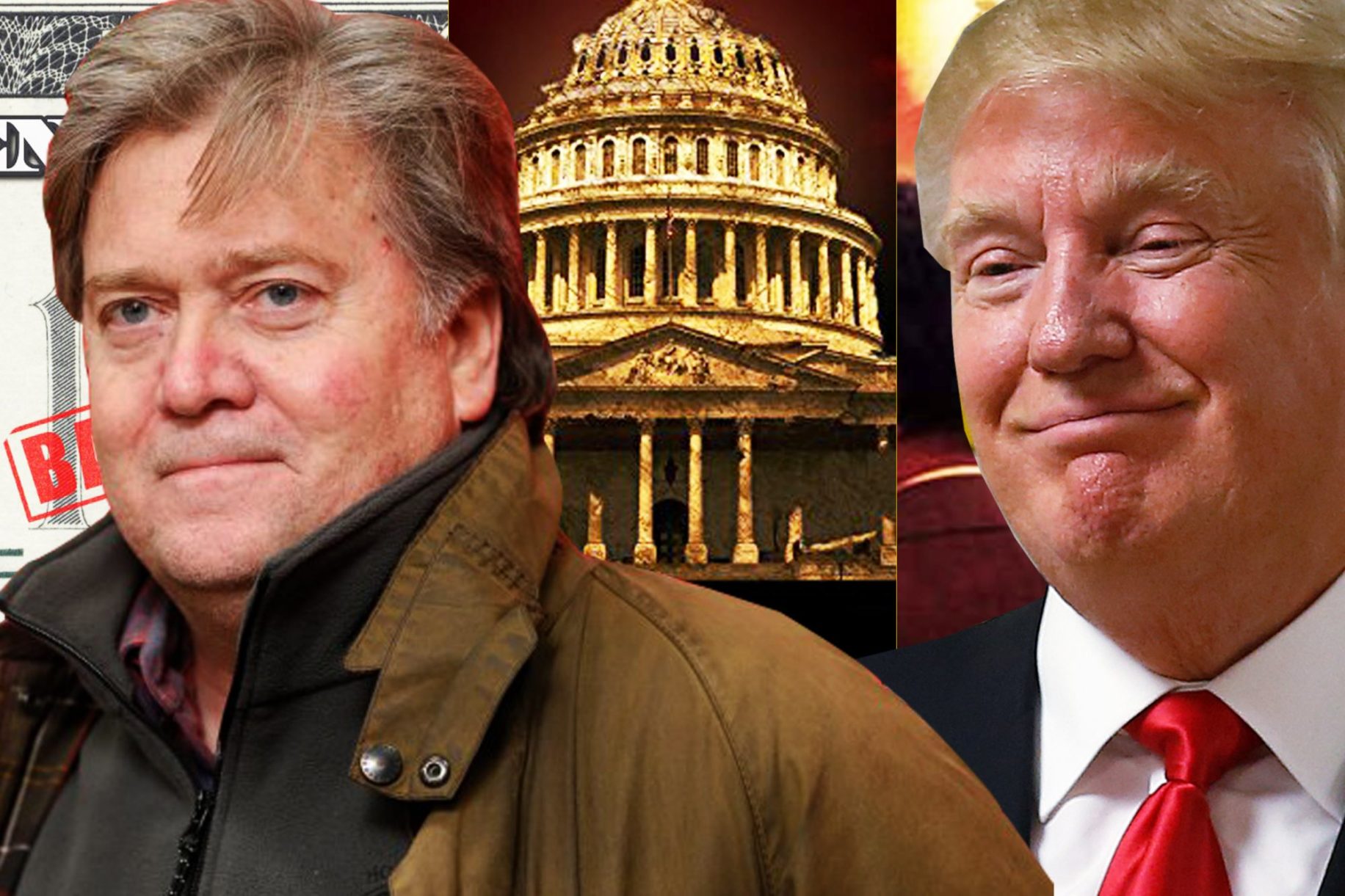 BY CHRIS JOHNSON  |  Despite a pledge to unite the country after his victory in the presidential election, Donald Trump has invoked the ire of progressives for selecting an “alt-right” conservative with a reputation for anti-Semitic, misogynistic and anti-LGBT views as a top adviser.

Trump named Steve Bannon, executive chair of the conservative website Breitbart News, to the role of chief strategist in the White House at the same time the president-elect designated Republican National Committee Chair Reince Priebus as chief of staff.

Labeled a white nationalist, Bannon has a history of hostile comments against minority groups and led a news website that published controversial material and promulgated conspiracy theories. Among Breitbart posts are pieces referring to Bill Kristol, a Republican, as a “Renegade Jew,” suggesting “Young Muslims in the West are a ticking time bomb,” calling the Confederate flag a symbol of “a glorious heritage” and extolling the alt-right movement as a “smarter” version of “old-school racist skinheads.”

Media outlets this week called attention to Bannon’s racist and anti-Semitic views, but LGBT people have also been in his crosshairs.

During a radio interview in 2011 in which he defended Sarah Palin against criticism, Bannon used an anti-gay slur to describe women with progressive views.

“These women cut to the heart of the progressive narrative,” he explained. “That’s one of the unintended consequences of the women’s liberation movement — that, in fact, the women that would lead this country would be feminine, they would be pro-family, they would have husbands, they would love their children. They wouldn’t be a bunch of dykes that came from the Seven Sisters schools up in New England.”

Amid objections from anti-LGBT advocates over Target stores allowing transgender people to use the bathroom consistent with their gender identity, Bannon during a radio interview in May stoked fears with anti-transgender comments.

Bannon contended that rather than being inclusive, Target was “trying to exclude people who are decent, hard-working people who don’t want their four-year-old daughter to have to go into a bathroom with a guy with a beard in a dress.”

Kate Kendell, executive director of the National Center for Lesbian Rights, said in a statement Bannon’s appointment is “a betrayal of the American people and of our democracy.”

“No one associated with the toxic views Mr. Bannon has espoused and purveyed through his news agency should be given a platform, much less elevated to a position of such prominence in our national government,” Kendell said. “We applaud those who have spoken out in opposition to Mr. Bannon’s appointment and we urge others to speak out now. We cannot look the other way as individuals who have spread messages of racism, anti-Semitism and the disparagement of women are put into positions of power and influence.”

Cathy Renna, a lesbian New York-based public affairs specialist, said Trump’s selection of Bannon means “he’s gone from wearing a white hood to going into the White House, and I think that’s incredibly troubling for so many people.”

“I honestly think that this is a time where if you’re looking at someone like Bannon, we’re looking at someone who really targets so many different marginalized communities and minority populations and folks who have served as a target of discrimination and hate in this country, and what he does is he simply throws gasoline on the fire,” Renna said.

Led by gay Rep. David Cicilline (D-R.I.), a group of 169 U.S. House Democrats sent a letter to Trump on Wednesday calling on him to remove Bannon as chief strategist on the basis the selection undermines national unity.

“Since the election there have been a number of incidents across the country in which minorities, including Muslim Americans, African Americans, Hispanic Americans, and Jewish Americans, have been the targets of violence, harassment and intimidation,” the letter says. “Mr. Bannon’s appointment sends the wrong message to people who have engaged in those types of activities, indicating that they will not only be tolerated, but endorsed by your Administration. Millions of Americans have expressed fear and concern about how they will be treated by the Trump Administration and your appointment of Mr. Bannon only exacerbates and validates their concerns.”

Breitbart hasn’t attacked gay people as much as other minority groups. One of the website’s star writers is Milo Yiannopoulos, who’s gay. A Trump supporter, Yiannopoulos has called Trump the most pro-gay candidate ever for raising the alarm about the danger Islamic extremists pose to LGBT people.

But Yiannopoulos himself has taken far-right views such as claiming all Muslims are Islamic extremists and has attacked transgender people as mentally ill. Yiannopoulos has written controversial pieces that have denigrated minorities, including articles with headlines such as “Birth Control Makes Women Crazy and Unattractive,” “Would You Rather Your Child Have Feminism or Cancer?” and “Gay Rights Have Made Us Dumber.”

A representative for Bannon and Breitbart didn’t respond to repeated requests for comment for this article.

Kellyanne Conway, senior adviser to Trump, defended Bannon on Tuesday during an interview on the Today show by touting his education and military service. Conway is a former pollster for the anti-LGBT National Organization for Marriage.

“I promise you he’s not scary, and he is as brilliant a tactician—and our campaign general, frankly, on the field—as everyone is also saying,” Conway said. “I know him well, I worked hand-in-glove with him. I feel that these charges are very unfair.”

Bannon isn’t the only one on Trump’s team that may spell trouble for LGBT people.

Trump’s selection of Reince Priebus as chief of staff could compel the president-elect to uphold the principles of the 2016 Republican Party platform, which seeks to undermine the U.S. Supreme Court’s decision in favor of same-sex marriage, deny LGBT protection from discrimination under the law and hints at support for widely discredited “ex-gay” conversion therapy.

Tony Perkins, president of the anti-LGBT Family Research Council, hailed the selection of both Priebus and Bannon to the White House, but had special praise for the RNC chief.

“I have worked closely with Reince over the last five years as he revitalized the GOP by returning the party to its true conservative principles as is evidenced by the GOP’s solidly conservative platform,” Perkins said. “He has made the GOP more effective through the implementation of a solid infrastructure that facilitated an outstanding ground game for Republicans. His leadership in rebuilding the party and promoting conservative principles helped set the stage for driving evangelical turnout to its highest level in recent memory.”

The views expressed by Bannon aren’t far from those expressed by Trump, who proposed a ban on all Muslims from entering the United States, raised fears about Islamic extremism and was accused of veiled anti-Semitism.

Renna said the selection of Bannon demonstrates Trump will advance “the backlash to the progress we’ve made having an African-American president for eight years, making so much progress on LGBT rights, women’s rights.”

“I think it’s been shocking in its impact in terms of really changing the election and I think it’s going to be a real time for some soul-searching by all of us who have been doing this work for so long, how do we reach people, how do we talk to people, how do we turn this tide a bit in a way that we can make some progress on,” Renna said. “I don’t think we can change Bannon’s mind anytime, but I think that there are millions of people in this country who are misplacing their anger, and it’s being directed at women and it’s very much obviously directed at Hillary Clinton.”