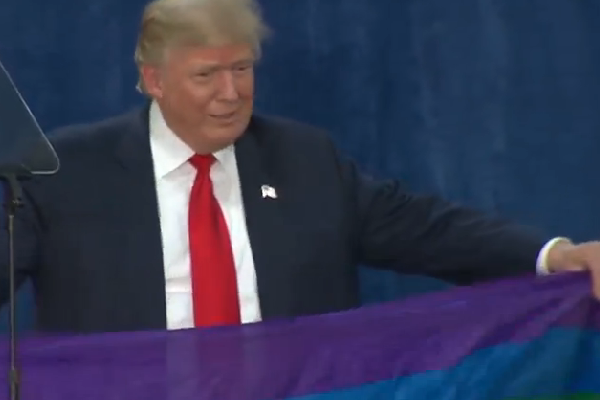 BY TROY MASTERS  |  Over the past 8 years, under direct pressure from President Barack Obama, US diplomatic strategy has included pressure on countries around the world to reform anti-LGBT laws and the effort has eased the situation for many LGBT people around the world.

Such an effort is likely to be discontinued by Donald Trump.

Of concern is a State Department task force that was set up in 2009 to track state sanctioned violence and criminalization laws against LGBT people in foreign countries. The Obama administration and State Department, first implemented under Hillary Clinton’s leadership, directed “diplomatic and consular missions to encourage foreign governments to reform or repeal laws” where LGBT people were being targeted for prosecution.

A U.N. Human Rights Council resolution followed in June 2011 — after vigorous debate and lobbying — condemning violence and persecution based on sexual orientation and gender identity.  The effort brought LGBT people a step closer to full protection under international law as part of the the Universal Human Rights declaration.

In 2011, the Obama administration went a step further by declaring LGBT rights to be human rights and issued a presidential order directing federal agencies worldwide to advocate and adjudicate for the “human rights of LGBT persons.”

Then Secretary of State Hillary Clinton made a broad appeal during a speech to the U.N. General Assembly in Geneva:

“The women and men who advocate for human rights for the LGBT community in hostile places, some of whom are here today with us, are brave and dedicated, and deserve all the help we can give them. We know the road ahead will not be easy. A great deal of work lies before us. But many of us have seen firsthand how quickly change can come. In our lifetimes, attitudes toward gay people in many places have been transformed. Many people, including myself, have experienced a deepening of our own convictions on this topic over the years, as we have devoted more thought to it, engaged in dialogues and debates, and established personal and professional relationships with people who are gay.

This evolution is evident in many places. To highlight one example, the Delhi High Court decriminalized homosexuality in India two years ago, writing, and I quote, “If there is one tenet that can be said to be an underlying theme of the Indian constitution, it is inclusiveness.” There is little doubt in my mind that support for LGBT human rights will continue to climb. Because for many young people, this is simple: All people deserve to be treated with dignity and have their human rights respected, no matter who they are or whom they love.

There is a phrase that people in the United States invoke when urging others to support human rights: “Be on the right side of history.” The story of the United States is the story of a nation that has repeatedly grappled with intolerance and inequality. We fought a brutal civil war over slavery. People from coast to coast joined in campaigns to recognize the rights of women, indigenous peoples, racial minorities, children, people with disabilities, immigrants, workers, and on and on. And the march toward equality and justice has continued. Those who advocate for expanding the circle of human rights were and are on the right side of history, and history honors them. Those who tried to constrict human rights were wrong, and history reflects that as well.

I know that the thoughts I’ve shared today involve questions on which opinions are still evolving. As it has happened so many times before, opinion will converge once again with the truth, the immutable truth, that all persons are created free and equal in dignity and rights. We are called once more to make real the words of the Universal Declaration. Let us answer that call. Let us be on the right side of history, for our people, our nations, and future generations, whose lives will be shaped by the work we do today. I come before you with great hope and confidence that no matter how long the road ahead, we will travel it successfully together.”

That the most powerful nation on earth would team up with the United Nations to throw considerable combined diplomatic power behind the rights of LGBT people was seen as a revolution for LGBT people around the world.

But there has been resistance, some of it fierce, with some nations refusing to acknowledge the presence of LGBT people in their country.  Some countries claim they have a religious or cultural right to repress the behaviors that defined LGBT, even to the point of persecution.

Will the Trump administration honor the resolutions

Trump several times during the campaign declared himself the most pro-LGBT Republican Presidential nominee in the history of the Republican party, that he would protect the American LGBT community “from the violence and oppression of a hateful foreign ideology.” He has said nothing about the Obama strategy to promote the human rights of LGBT citizens in other countries.

But the selection of Indiana Gov. Mike Pence as his vice-presidential nominee, whose views on LGBT rights is not dissimilar to the concerns addressed by the formation of the State Department’s task force and the UNHRC effort, speaks volumes on the topic.

In 2009, while a member of the U.S. House of Representatives, Pence butted heads with the Obama administration’s efforts.

He proposed an amendment to Section 333 of congressional bill H.R. 2410. His stated goal was the removal of all references to homosexuality — essentially gutting its meaning and force. Pence expressly said he did not oppose decriminalizing homosexuality internationally — but he did oppose identifying LGBT people as a legitimate group, and having the United States advocate for them internationally.

“I oppose mandating that our Secretary of State, diplomatic and consular staff essentially promote a gay rights agenda around the globe over and above other issues. Currently, section 333(c) reads, in part, ‘in keeping with the administration’s endorsement of efforts by the United Nations to decriminalize homosexuality in member states, the Secretary of State of State shall work through appropriate United States Government employees at United States diplomatic and consular missions to encourage governments of countries to reform or appeal laws, and again it refers to laws of such countries criminalizing homosexuality. But, then, it goes on to say to reform or appeal laws restricting the enjoyment of fundamental freedoms consistent with the United States law by homosexual individuals or organizations.’”

“My amendment would simply delete that language and replace it, as my colleagues can see, with the assertion that the Secretary of State shall continue to work through appropriate United States Government employees, diplomatic and consular missions, to encourage governments of other countries to protect all people against gross violations of internationally recognized human rights, as described in the Foreign Assistance Act, regardless of race, creed, religion, sex, or national origin, which, of course, is from Title VII of the Civil Rights Act of 1964. It seems to me that that is altogether much more appropriate than using this legislation to specifically direct, and I emphasize to my colleagues, the language of this legislation says ‘‘the Secretary of State shall work through employees, diplomatic staff, and consular missions’’ to promote a particular agenda on a particular issue bearing on a particular rights of particular individuals.”

We ought to rather have a broader statement on internationally recognized human rights. And I want to say, respectfully, and we ought to identify race, color, religion, sex, national origins, those matters upon which the American people broadly agree, rather than introducing and singling out an issue that divides so many in our Nation and I suspect will continue to.”

But there may be some hope on this front.

South Carolina’s governor, Nikki Haley, has been tapped by President-elect Trump to be the United States Ambassador to the United Nations.  As governor she has resisted efforts to ban transgender people from using the bathroom of their gender identification and also resisted religious freedom bills that would allow a special right to discrimination against LGBT people.

It should be noted, however, that her position can be taken in a similar spirit to Pence’s 2009 amendment, that inclusive and specific legislation is somehow suspect or offensive.