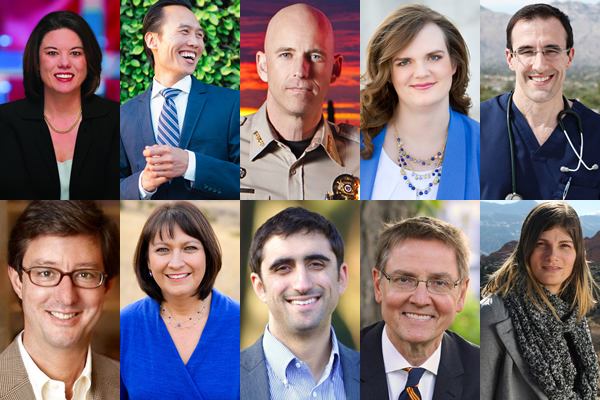 BY CHRIS JOHNSON  |  A plethora of non-incumbent openly LGBT candidates is seeking election to Congress this year, but a look at the polls reveals many of them are facing an uphill climb.

The Washington Blade identified 10 openly LGBT non-incumbent candidates running for seats in the U.S. House and U.S. Senate in 2016, including two candidates who are the first-ever openly transgender people to win nominations from a major U.S. political party, two openly gay Republicans and a candidate who’d be the first out lesbian with children elected to Congress.

The best prospect in this lot is business executive Angie Craig, a lesbian Democrat running against Republican Jason Lewis to represent Minnesota’s 2nd congressional district, which comprises suburbs of the Twin Cities.

According to a KSTP/SurveyUSA poll published on Oct. 17, Craig has a lead with 46 percent of the vote compared to the 41 percent who support her opponent, although 12 percent of voters were undecided.

A victory for Craig would mean Democrats retake a seat held by Republicans for 13 years, most recently by anti-LGBT Rep. John Kline (R-Minn.), who’s retiring this year.

Kyle Kondik, managing editor for “Sabato’s Crystal Ball” at the University of Virginia Center for Politics, said Craig has a good chance of winning the race.

“She is a small favorite thanks to a controversial opponent and Clinton’s likely ability to run ahead of Obama’s 2012 performance in this suburban swing district,” Kondik said.

But the good news ends there for LGBT congressional candidates. The two openly LGBT candidates running for seats in the U.S. Senate — Lexington Mayor Jim Gray in Kentucky and Misty Snow in Utah — face daunting odds, according to polls.

In Kentucky, Gray is challenging Republican presidential candidate and Sen. Rand Paul (R-Ky.), who has overwhelming name recognition in the Bluegrass State. Gray’s election would double the openly gay representation in the U.S. Senate, but that doesn’t look to be in the cards.

A WKU Social Science Research Center poll published on Tuesday found Paul has 55 percent of support compared to the 39 percent for Gray and six percent who are undecided.

In Utah, Snow made history by being the first openly transgender person nominated by a major U.S. party for a U.S. Senate seat, but faces overwhelming odds against incumbent Sen. Mike Lee (R-Utah). A UtahPolicy.com survey published last month found Snow trailing Lee by a whopping 39 points. Lee had 61 percent support, while Snow had just 22 percent.

In Colorado, Army veteran Misty Plowright made history on the same day as Snow by becoming the first openly transgender person nominated by a major U.S. party for a U.S. House race, but she faces daunting odds in the state’s 5th congressional district against five-term incumbent Rep. Doug Lamborn (R-Colo.). The Blade couldn’t find a poll monitoring the election.

The situation is reversed in terms of party in a Connecticut race. Clay Cope, an openly gay Republican who serves on the board of selectman for the town of Sherman, faces an overwhelming challenge in his bid to unseat two-term incumbent Rep. Elizabeth Esty (D-Conn.), who represents the state’s 5th congressional district. No polls could be found monitoring this race.

In Arizona’s 1st congressional district, Pinal County Sheriff Paul Babeu, who came out as gay in 2012 amid controversy during an earlier congressional bid, is running against Democratic former state Sen. Tom O’Halleran. It was once considered a competitive race, but a poll commissioned by the Democratic Congressional Campaign Committee made public last month found O’Halleran had opened up a 10-point lead over his gay Republican challenger.

In California’s 46th congressional district, two Democrats — former State Sen. Lou Correa and gay candidate Bao Nguyen — are running against each other as a result of the state’s so-called jungle primary, which allows the top two voter-getters regardless of party to proceed to the general election.

But Correa won the most votes in the June primary. Last month, a poll from his campaign found he had a 2-1 margin over his opponent. According to the poll, which found Correa had support among 47 percent of respondents, the number of undecided voters, 30 percent, was higher than the 23 percent who supported Nguyen.

Washington’s 7th congressional district is in a similar situation because two Democrats — State Sen. Pramila Jayapal and gay State Rep. Brady Walkinshaw — are running in the general election as a result of the state’s jungle primary system.

But the Bernie Sanders-backed Jayapal, who would be the first South Asian woman elected to Congress, trounced Walkinshaw in the primary and a poll unveiled by her campaign in August, as reported by the Seattle-based Stranger, found she was up 14 points heading into the general election.

Kondik attributed Heinz’ standing behind McSally in the race to neglect at the national level and the effort the Republican has placed in the race.

“It would be a big surprise if he won given that Martha McSally, the incumbent, is well-funded and has worked the district hard,” Kondik said. “National Democrats never took much interest in his candidacy.”

In Montana, where the race for U.S. House is for an at-large seat, State Superintendent of Public Instruction Denise Juneau, who would be the first lesbian Native American elected to Congress, is challenging freshman incumbent Rep. Ryan Zinke (R-Mont.).

Although Juneau once boasted a small deficit in the polls, that deficit seems to have expanded. A poll published last month by the Mason-Dixon polling firm found Zinke leading Juneau by a margin of 53 percent to 40 percent.

Of these non-incumbent candidates, the Gay & Lesbian Victory Fund has endorsed one of the Senate candidates, Gray, as well as five of the House candidates: Heinz, Walkinshaw, Craig, Nguyen and Juneau. Snow, Babeu, Plowright and Cope aren’t among the endorsed candidates. The organization is known to endorse only openly LGBT candidates that have a reasonable chance of winning.

Aisha Moodie-Mills, CEO of the Victory Fund, was optimistic despite the challenges these candidates face, pointing to internal early vote numbers, and said the endorsed candidates “are running great campaigns and could dramatically increase our numbers in the next Congress.”

“Angie Craig, Denise Juneau, Matt Heinz and Brady Walkinshaw are proof that the right LGBT candidates with the right message can run and win competitive campaigns anywhere,” Moodie-Mills said. “We’re looking forward to seeing just how large the Equality Caucus will grow on election night – but this week is critical. While early vote numbers look good for our races, our community has to turn out and urge friends and family in those districts to vote for equality.”

—  Special to The Pride LA from the Washington Blade and National Gay Media Association.