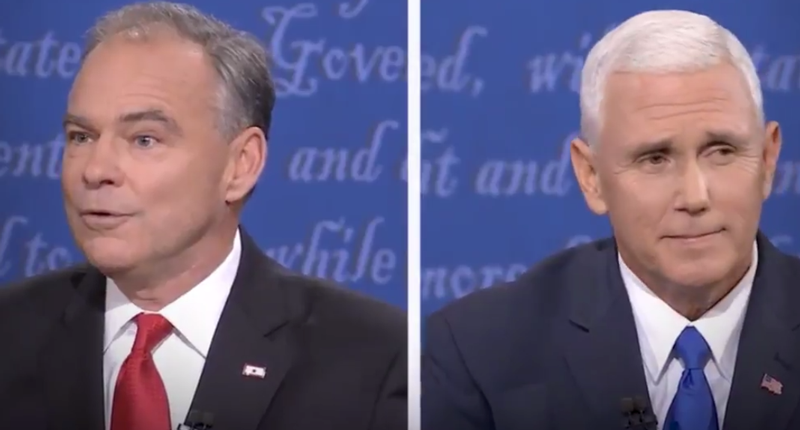 LGBT politicos are rightly exasperated or fuming after Tuesday night’s vice presidential debate between Democratic nominee Tim Kaine and Republican nominee Mike Pence. After all, GOP presidential candidate Donald Trump and the rest of America would not even know who Pence is if it were not for his proud moment signing the horribly anti-LGBT “religious liberty” bill surrounded by religious anti-LGBT promoters.

But Hillary Clinton’s VP pick only mentioned LGBT rights once—during the head-scratching debate over Russia, even though Kaine had invited a married lesbian couple from Virginia to sit among his prized coterie guests—guests he could have pointed to as an illustration of the progress the Democratic ticket says they represent.

The New York Times noticed. “Mr. Pence’s most controversial moment as a national figure — and the biggest stumble of his political career — came after he signed a law in Indiana that critics had warned would allow businesses to discriminate against gay men and lesbians. Facing an enormous backlash, Mr. Pence first defended the law and then walked it back. The episode seemed likely to tarnish him as a national figure in a lasting way,” The Times reported.

“But neither Mr. Kaine nor the debate moderator, Elaine Quijano of CBS News, raised the issueTuesday night. The lone mention of gay rights came when Mr. Kaine noted that Mr. Putin ‘persecutes L.G.B.T. folks and journalists.’ Mr. Pence now appears likely to escape the 2016 election without any extensive airing of this formative moment in his career.”

Unless either Trump or Clinton is asked about Pence’s exercise of “religious liberties” during the next town-hall style presidential debate onSunday, Oct. 9, at Washington University in St. Louis. The debate will be moderated by ABC’s Martha Raddatz and out CNN anchor Anderson Cooper, who Trump has complained doesn’t treat him nicely. You can submit a question for the debate here.

The other exchange that was the closest to an LGBT moment—at least one many LGBTs could laugh and snort at—was a very non-Christian euphemism from Gov. Pence. During perhaps the most profound of moments as the candidates discussed their Catholic and evangelical faiths and abortion rights, Kaine challenged Trump’s leadership ability due to the real estate developer’s racist statements on Mexican immigrants.

This is from the annotated transcript:

KAINE: When Donald Trump says women should be punished or Mexicans are rapists and criminals…

KAINE: … or John McCain is not a hero, he is showing you who he is.

KAINE: Can you defend it?

PENCE: There are criminal aliens in this country, Tim, who have come into this country illegally who are perpetrating violence and taking American lives.

KAINE: You want to — you want to use a big broad brush against Mexicans on that?

PENCE: He also said and many of them are good people. You keep leaving that out of your quote. And if you want me to go there, I’ll go there.

“That Mexican thing” lit up Twitter and promoted the creation of www.thatMexicanthing.com that redirects to Clinton’s website.

But many Latinos didn’t find the comment funny at all.

“#ThatMexicanThing where my mom has worked as a housekeeper for 25 yrs because her dream is to see her family’s dreams come true.#VPDebate, wrote Gabe Ortiz, @TUSK81.”

#thatmexicanthing where we work hard, play by the rules & continue to be discriminated. While .@realDonaldTrump cheats the system#VPDebate,” wrote Juan Altamirano @altamirajuan.

“That Mexican THING?!” WE ARE PEOPLE. WE ARE HUMAN BEINGS MIKE PENCE#VPdebate,” Tweeted Emmy Ruiz, @emmyruiz, who identifies herself as a “lucky immigrant kid.”

But let’s go back to that comment from pence about how Kaine left out that Trump said (in his June 2015 campaign announcement speech) that “many of them are good people.” In fact, as Pence well knows, that’s not true.

The pundits immediately claimed Pence won the debate because of his style, his calm demeanor.  Politico quoted celebrity executive speech coach Ruth Sherman saying: “My aha moment: Pence has studied Ronald Reagan from a performance standpoint. … Everyone thinks substance is the most important thing in these debates. Style is actually more important. These are, in essence, performances. … Mike Pence wins on style.”

But media folks have been waking up from their sleepy fawning over Trump and are now starting to really do some fact-checking. Factcheck.org had a field day, citing mistakes made by both candidates but pointing out the frequency of Pence’s outright lies (though not calling them “lies”). For instance: “Pence said, ‘The Trump Foundation is a private family foundation and they give virtually every cent to charitable causes.’ But that’s far from true,”FactCheck.org concluded.

And this is precisely why Kaine won the debate. Why the Republican establishment may be giddy over Pence’s calm, practiced Reaganesque presentation and evangelicals are thrilled he “went there” on partial-birth abortion, the supposedly deeply Christian governor also proved to be very Machiavellian–that the political end justifies the means, and the end is winning and the means is lying.

And while Kaine is getting pummeled by pundits for his constant, aggressive interruptions, he used his time to quote Trump directly and challenge Pence to defend him—which Pence couldn’t or wouldn’t do, or he would lie. That enabled the Clinton campaign do immediately put out side-by-side comparison between Kaine/Pence and what Trump/Pence really said.

So while the night might have gone to Pence for style, day two is all about fact-checking and raising questions about why voters would want a president who they couldn’t trust to tell the truth, especially about Russia and national security issues.

But for women and LGBT people worried about what would happen if Trump/Pence won, the exchange on abortion rights proved illuminating.

Kaine: And I worked with Jesuit missionaries in Honduras, now nearly 35 years ago, and they were the heroes of my life. I try to practice my religion in a very devout way and follow the teachings of my church in my own personal life. But I don’t believe in this nation, a First Amendment nation, where we don’t raise any religion over the other, and we allow people to worship as they please, that the doctrines of any one religion should be mandated for everyone….. That was a real struggle. But I think it is really, really important that those of us who have deep faith lives don’t feel that we could just substitute our own views for everybody else in society, regardless of their views.

Pence: “I would tell you that for me the sanctity of life proceeds out of the belief that — that ancient principle that — where God says before you were formed in the womb, I knew you, and so for my first time in public life, I sought to stand with great compassion for the sanctity of life. The state of Indiana has also sought to make sure that we expand alternatives in health care counseling for women, non-abortion alternatives. I’m also very pleased at the fact we’re well on our way in Indiana to becoming the most pro-adoption state in America. I think if you’re going to be pro-life, you should — you should be pro- adoption….. So for me, my faith informs my life. I try and spend a little time on my knees every day. But it all for me begins with cherishing the dignity, the worth, the value of every human life.”

“Because there is — a society can be judged by how it deals with its most vulnerable, the aged, the infirm, the disabled, and the unborn. I believe it with all my heart. And I couldn’t be more proud to be standing with a pro-life candidate in Donald Trump,” Pence replied.

Expect Trump to be asked if he is as pro-life as his running mate. His answer to that in the next debate may overshadow his answer, if he gives one, to why he apparently feels it’s OK for him to not pay taxes.

And that’s why last night’s VP debate mattered – and why Kaine won in the end.