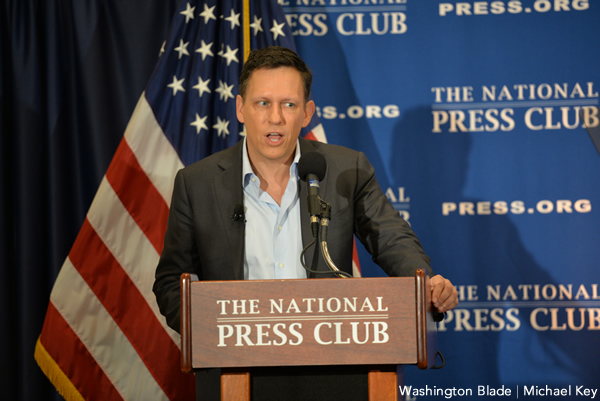 BY CHRIS JOHNSON  |  Gay billionaire Peter Thiel, who gained notoriety both in Silicon Valley and in the LGBT community for his support of Donald Trump, defended his choice Monday by insisting the Republican candidate “gets right” the harm the status quo has caused America.

A co-founder of PayPal and Facebook board member, Thiel made the case for his candidate during an event at the National Press Club in D.C. shortly after donating $1.25 million to the Trump campaign.

Thiel acknowledged 2016 has been a “crazy election year” and compared the campaign to a skit on NBC’s “Saturday Night Live,” but said “it is less crazy than the condition of our country.”

Among the problems Thiel cited in the United States are a health care system that he said subsidizes the world, but doesn’t help Americans; an education system in which students take on increasing debt they can’t escape even in bankruptcy; stagnant income and the wasting of money on foreign wars.
Thiel said the candidate’s supporters continue to back him because of the “big things Trump gets right.”

“Free trade has not worked out well for all of America,” Thiel said. “It helps Trump that the other side just doesn’t get it. All of our elites preach free trade. The highly educated people who make public policy explain that cheap imports make everyone a winner, according to economic theory, but in actual practice, we’ve lost tens of thousands of factories and millions of jobs to foreign trade. The heartland has been devastated.”

Thiel, who declared he’s “proud to be gay” at the Republican National Convention, has faced criticism in the LGBT community for supporting Trump, who opposes marriage equality and has staked out other anti-LGBT positions during his campaign.

Making the case “louder voices” won’t tolerate views of one-half of the country, Thiel criticized the Advocate magazine over an op-ed saying he shouldn’t be called “gay,” despite his declaration in Cleveland, because of the word’s political connotations.

“This intolerance has taken on some bizarre forms,” Thiel said. “The Advocate, a magazine which once praised me as a ‘gay innovator’ even published an article claiming that as of now I’m, and I quote, ‘not a gay man,’ unquote because I don’t agree with their politics. The lie behind the buzzword of diversity could not be made more clear: If you don’t conform, then you don’t count as diverse, no matter what your personal background.”

Calling both major presidential nominees “imperfect,” Thiel also said he doesn’t agree with Trump about everything and condemned the 2005 recording unearthed in early October in which the candidate was heard bragging about sexual assault.

“Nobody thinks his comments about women were acceptable,” Thiel said. “I agree they were clearly offensive and inappropriate, but I don’t think the voters pull a lever in order to endorse a candidate’s flaws. It’s not a lack of judgment that leads Americans to vote for Trump; we’re voting for Trump because we judge the leadership of our country that failed.”

Thiel also faulted Hillary Clinton, saying her idea to impose a no-fly zone over Syria would “risk a direct nuclear conflict” with Russia.

“Incredibly, that would be a mistake even more reckless than invading Iraq,” Thiel said. “Since most of the planes flying over Syria today are Russian planes, taking that as the first choice of action would do worse than involve us in a messy civil war, it would risk a direct nuclear conflict.”

Thiel, who said he supported Ron Paul in 2008 and 2012 and Carly Fiorina early on in the 2016 election, said he hoped to see a match between Trump and Sen. Bernie Sanders (I-Vt.) because both candidates challenged the establishment.
“I think both of them viscerally felt the decline and viscerally, they very much disagreed about what caused it, what to do about it, but that would have been a very different sort of debate,” Thiel said. “What we have is a debate between the one candidate who says everything is more or less fine, or is as good as it can be, and the another one who says, ‘We’re on the Titanic that’s about to sink,’ so I prefer the second one.”

Under questioning from moderator and National Press Club President Thomas Burr, Thiel distanced himself from other Trump proposals, such as a ban on Muslims from entering the United States or the candidate’s proposal to open the nation’s libel laws.

“The media is always taking Trump literally,” Thiel said. “It never takes him seriously; it always takes him literally. I think a lot of the voters who vote for Trump take Trump seriously, but not literally. So when they hear things like the Muslim comment, or the wall comment, things like that, the question is not whether you’re going to build a wall like the Great Wall of China, or how exactly are you going to enforce these tests. What they hear is we’re going to have a saner, more sensible immigration policy. We’re going to try to figure out how do we strike the right balance between cost and benefits.”

Asked whether Trump is a successful business person, Thiel said Trump is “a very successful real estate developer,” but can’t render an evaluation because the nature of the technology business is different from real estate.

“We can debate how many zeroes he has exactly in his net worth, but has a lot, he has a huge number even,” Thiel said.

In response to a question submitted by the Washington Blade on whether Trump would roll back LGBT rights or reverse the Supreme Court ruling in favor of same-sex marriage, Thiel said he hasn’t had that conversation with Trump.

“I do think that he represents a sea change for the Republican Party of Bush 43,” Thiel said. “Just think about the way Bush 43 was speaking negatively about gay marriage at every single campaign event in the 2004 election. It’s something where Trump has — everything he indicated is that he would be quite expansive on gay rights.”

Despite the criticism he faced for supporting Trump, Thiel said his friendships and business relationships have remained intact.

Thiel also said he knows “not a large number, but a small number” of individuals in Silicon Valley who support Trump but haven’t said so publicly out of fear of reprisals.

Outed as gay by the now-defunct website Gawker, Thiel also defended the lawsuit he funded against the website over the its publication of a sex tape featuring Hulk Hogan, which forced the company to close, denying the litigation sets a dangerous precedent.

The entrepreneur called Gawker’s action the most “egregious violation of privacy imaginable,” which is why he said the website lost the lawsuit “catastrophically.”

Insisting he thinks journalists are a “privileged group,” Thiel said he doesn’t think what happened to Gawker could happen to other news outlets and more generally discouraged similar litigation.

As for a future for himself in politics, Thiel said he will occasionally get involved, but plans to remain in the technology industry and doesn’t want to make politics a full-time career.

“I always have this somewhat schizophrenic view of politics, where I think it’s a horrible business, it’s incredibly destructive, a lot of it is like trench warfare on the western front where there’s crazy amounts of carnage and nothing ever changes,” Thiel said. “That’s one part of my schizophrenic view. The other part is that it is really important. There’s some problems that can’t be solved outside of this political arena and the way that I deal with my schizophrenia is that I occasionally get involved, but don’t want to make it a full-time thing.”