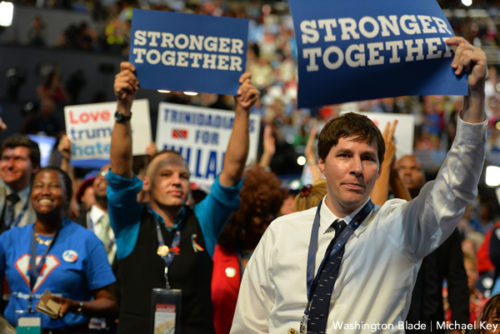 BY CHRIS JOHNSON  |  SPECIAL TO THE PRIDE LA VIA THE NATIONAL GAY MEDIA ASSOCIATION FOR THE WASHINGTON BLADE  |  PHILADELPHIA — Democrats ratified a party platform late Monday called the most LGBT-inclusive in history and a unifying document after a bitter primary.

As convention chair Rep. Marcia Fudge (D-Ohio) presided, delegates at the Democratic National Convention approved the platform by voice vote. Although loud “nays” were heard, the overwhelming “yays” in favor of the platform carried the day.

Jessica Frisco, a Manhattan-based delegate pledged to Sen. Bernie Sanders (I-Vt.), said having LGBT inclusion in the Democratic Party “has always been really important to me.”

“Not that it’s become less of a priority, but I think the Democrats have always been pretty progressive on the issue, at least in recent years, and you know, it’s been Democrats that have been supporting that type of legislation in contrast to Republicans,” she said. “I guess I wasn’t really surprised to see that that was a big part of the platform and I wouldn’t be surprised to know that everyone in the Democratic Party supports that.”

The 55-page document has a specific LGBT plank titled “Guaranteeing Lesbian, Gay, Bisexual, and Transgender Rights” and includes LGBT references in planks throughout the document.

“Democrats applaud last year’s decision by the Supreme Court that recognized that LGBT people — like other Americans — have the right to marry the person they love,” the platform says. “But there is still much work to be done. LGBT kids continue to be bullied at school, restaurants can refuse to serve transgender people, and same-sex couples are at risk of being evicted from their homes. That is unacceptable and must change.”

Matt Hughes, a 25-year-old delegate from Chapel Hill, N.C., pledged to Hillary Clinton, said the LGBT inclusion is important to him both as a Democrat and a gay man.

“For me as a Democrat, it’s important, but also as a gay man that we have these ideals in our party’s platform about non-discrimination in terms of employment and transgender rights and really everything,” Hughes said, “especially when you compare and contrast it to the Republican Party platform that was passed last week, which is definitely the most anti-LGBT platform that the Republican Party has ever put forward.”

Hughes said he helped draft a North Carolina platform that included similar language, which he said is important because of the recently enacted House Bill 2 in the state. That law bars pro-LGBT city ordinances and prohibits transgender people from using the restroom consistent with their gender identity.

“That language says to me that for the second time in four years, that on LGBT issues, North Carolina is on the wrong side of not just fairness and equality, but also just the wrong side of history,” Hughes said. “And I think that the Democrats have always stood up for the marginalized and oppressed in our communities, and so having language that is so strongly in favor of rights for our transgender brothers, I think, is very important.”

Other language throughout the document recognizes immigration detention for LGBT people who sought refuge in the United States “can be unacceptably dangerous.” Referencing the recent end to the ban on transgender military service and “Don’t Ask, Don’t Tell” repeal, the platform says the U.S. military is stronger with people of different “sexual orientations and gender identities.”

Delegates ratified the platform after the full platform committee reviewed and made changes to the document during a meeting earlier this month in Orlando, Fla.

During the meeting, the committee enhanced the LGBT language further by adding a plank insisting LGBT rights should be part of U.S. foreign policy. The language was based on Clinton’s 2011 speech in Geneva where she declared, “Gay rights are human rights and human rights are gay rights.”

Mara Keisling, a D.C.-based transgender advocate and member of the platform committee, called the platform “the most progressive platform on LGBT and trans rights in the history of the United States.”

Although Keisling acknowledged the platform is “symbolic,” she said that symbolism can be a “big thing” to leverage change.

“It’s just symbolic, but it gives us a hook, it again starts getting more and more people thinking about transgender and LGBT people and thinking about do they support or do they not support us, and it gets some of our issues in front of people who maybe wouldn’t have seen it before,” Keisling said.

In 2012, the platform for the first time endorsed marriage equality in addition to other language rejecting the anti-gay Defense of Marriage Act and endorsing a trans-inclusive Employment Non-Discrimination Act, but the 2016 document exceeds those milestones.

Marveling at the Democratic Party’s progression on LGBT inclusion in its platforms was Diego Sanchez, a D.C.-based transgender advocate in attendance at the convention and in 2008 the first openly transgender member of the platform committee. He wasn’t a member in 2016.

“The progress has been tremendous,” Sanchez said. “In 2008, we didn’t have the word marriage by design. We were responsible for three things: Bringing in the definition of same-sex couples as families, to have gender identity included in non-discrimination and to include HIV as a domestic policy priority. We’ve come so far from that place of using language that is cautious to where we can boldly be inclusive of the entire community.”

But one proposed change that didn’t make it into the Democratic platform was changing the LGBT acronym throughout the document to LGBTQ to explicitly include people who identify as queer.

During the platform committee meeting, David Braun, a Sanders appointee from Oakland, Calif., sought the change, which platform committee chair and former Connecticut Gov. Dan Malloy said he would take as a request for a technical change to the document. It wasn’t immediately clear why the change wasn’t made.

Vincent Harding, a 28-year-old delegate from Austin, Texas, pledged to Clinton and chair of the Democratic Party in Travis County, said advanced LGBT-inclusive language is important because “we need to make sure we treat everyone equally.”

“The ability to love who we want to love is fundamental to all of us, so it is essential that it is part of the platform,” he said. “I don’t know what took so long, but I think things are changing and we have seen Republicans move a little bit, we’re going to keep pushing them a little bit and hopefully we won’t have the situation like we saw in Kentucky where people don’t want to grant gay marriages. Hopefully, that’ll be universal around the country and we’ll continue to move forward together.”

Chuck Rocha, a 47-year-old D.C. delegate pledged to Sanders, said the LGBT-inclusive language is “hugely important” to him because of his opposition to discrimination in all forms.

“I’m one of the only Latino delegates in the nation, the only one from D.C.,” Rocha said. “Discrimination doesn’t know a sex or a color, we shouldn’t discriminate for no reason, and everybody, no matter who they love, should be able to get married and live their lives the way they want to.”