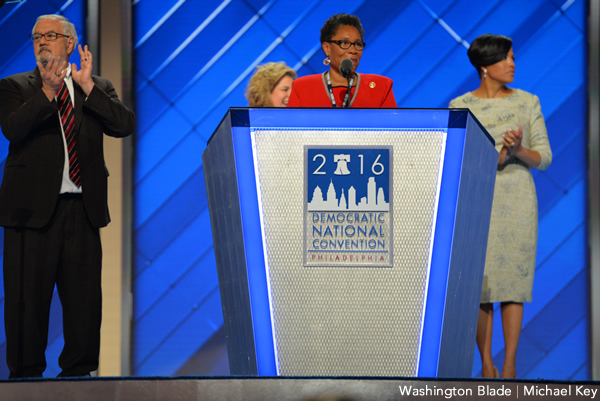 BY CHRIS JOHNSON  |  SPECIAL TO THE PRIDE LA VIA THE NATIONAL GAY MEDIA ASSOCIATION AND WASHINGTON BLADE  |  PHILADELPHIA — Fanned by nearly 100-degree heat, tensions ran high during the first day of the Democratic National Convention as Bernie Sanders supporters booed Hillary Clinton at an event designed to promote her candidacy.

After she took the podium at the Wells Fargo Arena, Rep. Marcia Fudge (D-Ohio), chair of the convention, said she’s “excited” to elect to Clinton and her running mate Tim Kaine to the White House.

The delegates responded with cheers and chants of “Hil-lar-y! Hil-lar-y!” — but also audible boos from Sanders supporters not willing to back the candidate.

The rocky start to the convention followed controversy in which Democratic National Committee chair Debbie Wasserman Schultz announced her resignation as a result of an email dump on WikiLeaks revealing the organization favored Clinton in the primary as opposed to staying neutral.

Speaking at an event earlier in the day, Sanders himself was booed when he told supporters to vote for Clinton, even though he admonished them with the message, “This is the real world that we live in.”

Wellington Webb, a former mayor of Denver, sought to calm things down by saying both Clinton and Sanders are good candidates and telling supporters three times in a row, “They both deserve our praise.”

In an attempt to mitigate the disunity, the DNC issued an apology to Sanders supporters for the way their candidate was treated in the primary. The Sanders campaign texted supporters urging them not to boo Clinton during the convention.

Diane Russell, a Maine delegate pledged to Sanders, took the stage and appeared to mollify Sanders supporters. She urged delegates to ratify the unity commission, which seeks to reform the Democratic primary process. Among other things, the commission is pledged to reduce the number of superdelegates by two-thirds.

Russell said Democrats are working to make reform within the party and led the audience in a chant of “Not-for-sale! Not-for-sale!”

“Obviously, we’ve had a real family disagreement over the role of superdelegates in our party’s nominating process,” Russell said. “Working together, it is supposed to be hard work, but we can definitely do more as a party to ensure a fairer, more open process that places everyday voters at the center.”

Jose Nabarrate, a 22-year-old gay delegate from California pledged to Sanders, expressed anger to the Washington Blade over the revelations in the WikiLeaks email dump and problems he has with Clinton.

“A lot of people are passionate about Bernie Sanders,” Nabarrate said. “And ever since we started receiving this kind of information especially from WikiLeaks, and everything that we learn about Hillary’s past, we decided we want to go with someone we trust and know is going to get us there, and in a truthful manner.”

Nabarrate said he’s unsure of whether he’ll vote for Clinton in the general election and that the remainder of the convention will inform his decision.

Despite the ruckus at the convention, a recent poll found 90 percent of Democrats support Clinton in the general election, undercutting the notion the base isn’t willing to support her.

Pennsylvania State Rep. Brian Sims (D-Philadelphia), a gay Clinton supporter in attendance at the convention, but not a delegate, denied the discontent reflected any disunity within the party.

“Honestly, I think what we’re seeing on the floor is in many ways a classic example of American Democracy,” Sims said. “We, as a party, have great candidates to select from that people were passionate about, they did fire people up, and they’ve brought that passion to the convention and they’re going to use that passion to select the candidate that best exemplifies all of us.”

Referring to the Republican convention, Sims said, “Yeah, passions are flaring, but it’s better than anger and hate flaring.”