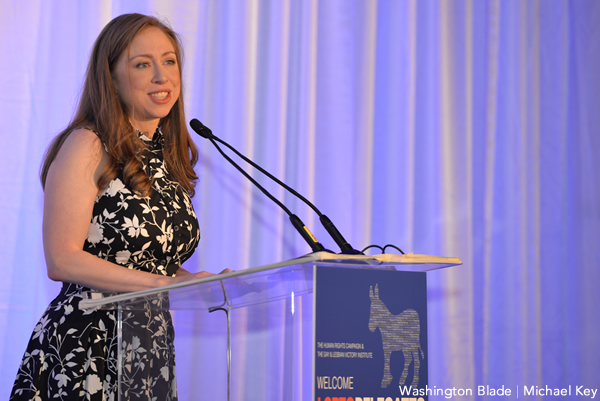 BY CHRIS JOHNSON  |  Chelsea Clinton said Wednesday the “most offensive” thing about last week’s Republican National Convention was the embrace of widely discredited “ex-gay” conversion therapy in the party platform.

“I think what I found most offensive really has to be, as a mom, the open embrace of conversion therapy in the Republican Party platform,” Clinton said. “In other words, child abuse.”

Although Clinton called Republican remarks in Cleveland as a whole “divisive, degrading, demeaning,” she said language in support of conversion therapy should itself be a “clarion call” to elect her mother, Hillary Clinton, as well as Democrats up and down the ballot.

Chelsea Clinton said the 2016 election is the most important in her lifetime, first because it’s the first election in which she’s voting as a mother, and second because of the risk to recent accomplishments on LGBT rights.

Clinton made the remarks before an estimated 300 attendees at a lunch event for LGBT delegates co-hosted by the Human Rights Campaign and the Gay & Lesbian Victory Institute at the Hilton Philadelphia.

Taking the podium to a standing ovation, Clinton urged the audience to sit down, saying if they didn’t she would start crying. Reflecting on the speech from former President Bill Clinton on the previous night, Chelsea Clinton said not crying has been a challenge for her throughout the convention because she “almost cried many times when my father spoke last night.”

Clinton touted the number of openly LGBT candidates running in the 2016 election, saying the country must “elect people who reflect our values” to ensure her mother can make good on her campaign promises.

“I will do everything I can between now and November to ensure that as many people I can reach know what’s really at stake in this election, and how mom is fighting for and how she has fought for a better life in stark contrast to what Trump and Pence are proposing,” Clinton said. “And I hope that all of you will continue to be part of this effort.”

Republican National Committee Chair Reince Priebus has denied the party platform endorses “ex-gay” therapy. The language says, “We support the right of parents to determine the proper medical treatment and therapy for their minor children.”

Other speakers at the event sounded the alarm over Trump and running mate Indiana Gov. Mike Pence for the perceived threat they pose to LGBT people.

Rep. Mark Takano (D-Calif.) a gay lawmaker, referred to Pence’s campaign platform in 2000 as a U.S. House candidate, which said he wouldn’t back federal HIV/AIDS funds unless money was cut to initiatives “that celebrate and encourage the types of behaviors that facilitate the spreading of the HIV virus.”

“This is a man who cut HIV funding and then put all that money that he took out of HIV funding into gay conversion therapy,” Takano said. “What kind of person does that?”

An audience member shouted out in response, “A horrible one,” eliciting applause from the audience.

Attendees hissed when Chad Griffin, president of the Human Rights Campaign, said the Trump-Pence ticket was the biggest threat to LGBT people ever posed by a presidential ticket.

“The true test of all our success will be whether we’re able to protect and build on the progress that we all made under President Obama, or whether we will allow it all to be stripped away, stripped away by the gravest threat our community has ever faced in a presidential election,” Griffin said.

Rep. Mark Pocan (D-Wis.), another gay lawmaker, accused the GOP of being “more worried about who’s in our bathrooms than who’s buying guns” in the United States, referencing the party’s anti-trans bathroom measures and lack of support for gun safety.

Pocan also chided Trump for stumbling over the LGBTQ acronym during his acceptance speech at the Republican convention and for his use of the phrase “ask the gays” to compare himself to Clinton.

“Whenever you put pronouns in front of the word gays, you’ve lost any positive connotation,” Pocan said.

—  SPECIAL TO THE PRIDE LA FROM THE NATIONAL GAY MEDIA ASSOCIATION AND WASHINGTON BLADE.