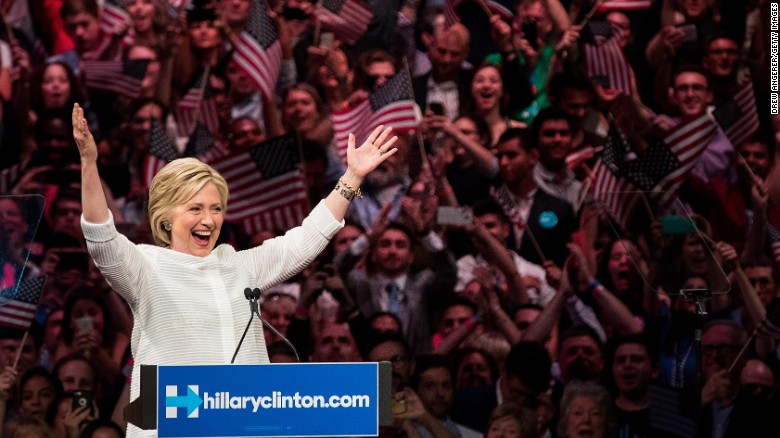 Are you with her?

A few dozen celebrity supporters of Hillary Clinton came together and recorded an Elizabeth Banks inspired Pitch Perfect–style video. The video debuted at the Democratic National Convention on Tuesday, July 26.

Rachel Platten’s “Fight Song” is always playing anytime Clinton hits the stage at her campaign rallies and now, with the release of the video, the song becomes the official anthem of the campaign and a likely breakout summer hit.

The video, produced by Elizabeth Banks, featured the Pitch Perfect 2 director: “This is for Hillary.” Banks made her entrance at the DNC on Tuesday to Queen’s “We Are the Champions,” mimicking the gassy, silhouetted entrance Republican presidential nominee Trump made at last week’s Republican National Convention.  “How’d you like that?  I just bought the fog machine on Amazon for like $30,” she joked.

An image of the previous presidents appeared like a stain glass over the stage at the Wells Fargo Center and then Clinton shatters through, live via satellite feed from a diner in Chappaqua: “I am so happy for this great day and tonight,” the former secretary of state said. “What an incredible honor you have given me, and I cannot believe we just put the biggest crack in that glass ceiling yet. Thanks to you and everyone who has fought so hard to make this possible. This is really your victory. This is really your night. And, if there are any little girls out there who stayed up late to watch, let me just say, I may become the first woman president, but one of you is next.”