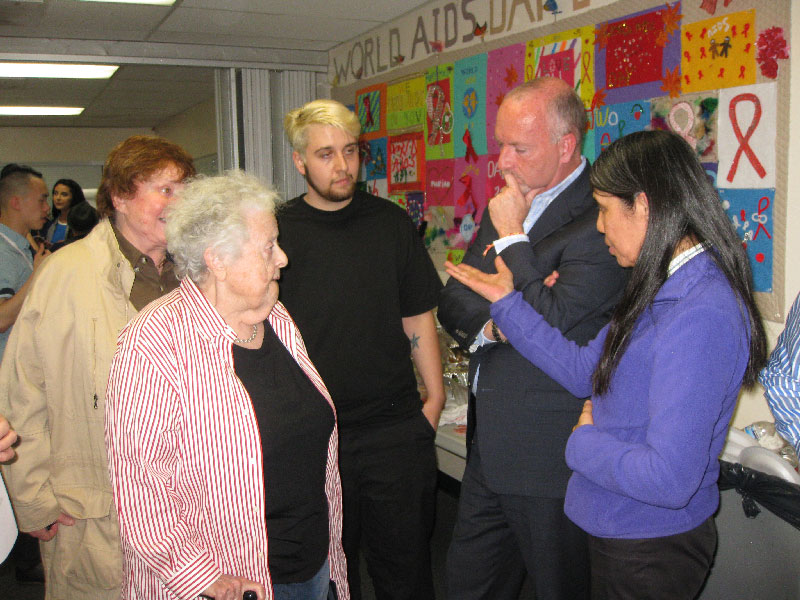 BY TROY MASTERS  |  The board of Christopher Street West, organizers of LA Pride, need to listen to Reverend Troy Perry. They haven’t even bothered to call the CSW co-founder to ask his thoughts about transforming the famous LGBT Pride parade and festival into a quasi-LGBT identified indy-style music festival.

“I’ve lived to see equality unfold.  We can’t — our movement can’t — take steps backward now.  We can’t leave people behind.  So, If the parade becomes something that is not reflective of our community because of the actions of a bad executive board then we have a problem,” said the 76-year old Perry, spiritual leader and founder of Metropolitan Community Church and the only surviving founder of LA Pride, launched on Hollywood Blvd. in 1970.

Erasing Perry, the pioneers of the LGBT civil rights movement, and the transgender community at the proposed new LA Pride Music festival was a major topic of discussion at an emergency meeting called by transgender leaders and allies Monday night, May 9 at the headquarters of the Asian Pacific AIDS Intervention Team (APAIT).

Peter Cruz, APAIT Associate Director, speaking to about 75 concerned community leaders and activists, says he received a call from CSW President Chris Classen who told him that because Pride has traditionally lost money, he had made the decision to revamp the festival, including the activities usual scheduled for Friday night.

The Friday night events—including a transgender tent and the Dyke March—have for many years been a treasured part of transgender life in Los Angeles.

In his phone call to Cruz, Classen said Friday night had become “lackluster” and needed to be revamped. Cruz says he told Classen that the Friday night event is the only night of the year where the trans community can come together and celebrate, as well as remember trans people who had been murdered.

Classen tried to negotiate with Cruz by offering $45,000 in tickets that APAIT could distribute to smaller non-profits and he offered to extend the time available for a transgender event from 2 hours to 4 hours.

Zoey Luna—a 14-year old transgender woman who was a 2015 Grand Marshal with Reverend Troy Perry—said: “As a former Grand Marshal, I represented the future. What’s my future since I am not even invited to the Pride? How many 14-year olds are going to be able to pull out $50?

“It’s disgusting what’s happening,” Luna continued. “I get that you want more fun for all the kids and get more exposure but where’s the pride for our community? It’s literally just a festival now.  I don’t want to go to a Rave.  I wanted to celebrate my pride and my heritage and not Carly Rae Jepson, who I haven’t heard about in 4 years (when Luna was 10). No offense to her – but where have you been?”

Robin Tyler, an LGBT pioneer who has produced dozens of music and comedy festivals, including the main stages of the Marches on Washington, says she does not see a transparent budget with CSW. “I demand the Christopher Street West budget.  I don’t know how or if they are taking competitive bid on vendors who supply things to the festival, like staging, toilets, garbage, etc.,” she said. “If the stages are costing $175,000, I want to know that they got the best deal, for instance.  No one knows!”

Tyler added, “This is much beyond transgender inclusion….Our pride has been taken over. Follow the money.

“There’s a lot of money there,” she continued “It’s not about increasing attendance with Millennial participation. If you want their participation, you don’t charge $50 to get in.  This is not a Coachella Music Festival. This is our Pride Festival.”

Demaya Wilson, Princess of Unity for the Imperial Court of Los Angeles and Hollywood, says she is from Selma, Alabama and never imagined she would be here in Los Angeles. “I came here to follow my dream and find happiness.  I never even knew there was a pride parade and of course I didn’t know there was such a thing as Trans Day pride,” the young trans woman of color said.

“At a very vulnerable time (for trans people), they’re stripping us of everything right now. We are not asking for anything extravagant,” Wilson added.

The APAIT meeting was remarkable in its display of respect for elders and diversity, with Millennials and legacy members showing great concern for the history and inclusiveness of the community.

“Shut it Down, Take It Back” became a slogan born at that meeting, suggesting a boycott or some other action. A number of community members will gather on May 14 to plan strategy.

The emergency community meeting followed last week’s raucous West Hollywood City Council meeting at which CSW board president Classen distributed a letter that said, “Adding the word ‘music’ to the title of L.A. Pride is a subtle welcome to a younger generation who does not inherently understand the historical context of the event.”

Criticism was immediate and has intensified over the scope of change being implemented on West Hollywood’s largest public event. Speaker after speaker said the changes downplayed the history of the LGBT struggle, minimized transgender people, minimized lesbian issues and was a move toward mainstreaming, or de-gaying, a festival that for decades has been a celebration of LGBT lives.

Ivy Bottini, the legendary 90-year old lesbian icon, posed a question to the city council that has become the pivotal question about those changes, changes that have roiled LA’s LGBT community.

“I’d like to know: who is running CSW? Is it a one-man show? A two-man show? The board should be making decisions.  Are they doing that?  Or has the head of the organization suddenly decided it’s his organization?” Bottini asked at the City Council meeting.

By the end of that meeting, City Council vowed greater oversight of CSW.

But the next day, Bottini’s question hung in the air as CSW’s full board met without anyone from City Council present. Members of the public, including Bottini, attempted to get clarity on a variety of questions but were met by resistance and obfuscation.

Facing a barrage of questions during the period set aside for public comment, Classen announced to the room, “We don’t respond to comments.”

But that did not stop Bottini:  “Did anyone on the board review your letter?”

Classen finally responded by saying that his statement was sent to the entire board. But he did not say whether his statement was approved by the board, though he implied it was. “To be clear, only a few people saw the letter (about the Music re-branding) before hand,” he said.

Steve Ganzell, a long time CSW board member, says he told Classen, “If we are not made aware of things, I can not support you.”

The exchange reveals that the board was not consulted in advance of the decision to change the entire nature of the event by rebranding it a Music Festival. It also raises questions about a variety of other changes such as ticket-pricing, specific transgender inclusion and entertainment talent.

A discussion between board members responding to to frustrations raised by an unidentified transgender person was interrupted by Marquita Thomas, an executive board member. She mentioned California’s Brown Act and then quickly moved on to the next agenda item.

The Brown Act is a government “sunshine” law that guarantees the public’s right to attend and participate in official meetings of elected officials or groups that are receive funding from local governments.  The law also prohibits decisions from being made in secret.  CSW is a non-profit that receives hundreds of thousands of dollars in underwritten services and subsidies from the City of West Hollywood.

It is not clear why Thomas mentioned the Brown Act while also seeming to violate the intent of the act by ending public discussion at a contentious moment. Critics later described the situation as “angry,” “officious” and “off-putting” with the entire meeting described as “extremely tense.”

Hours after the CSW board meeting, Thomas sent a stern email to the board.  The subject line of the email was “Absolutely unacceptable.”  In it she wrote: “You have a responsibility to protect the organization even when you don’t agree with a vote.  Speaking against the organization in any way and especially to the press is conduct unbecoming and a violation to your duty and loyalty.”

“Conduct unbecoming” is a phrase famously used by the military to expel gay and lesbian service members.

Steve Ganzell instantly hit reply all.  “You are not welcome to shut-down, vilify or ignore those with whom you disagree.”

The email was read aloud to The Pride LA by a reliable source.

Robin Tyler said: “If the executives producing the Pride festival do not produce a detailed budget, for the past several years, including but not limited to the competitive bids they should have been asking for, then the California Attorney General’s office should begin an investigation. You cannot run a non-profit like it is your own private business.”

“I don’t understand what they are hiding.  Why does this executive committee need so much control?  Sure, I guess they can ‘legally’ have a non-disclosure agreement. But its very existence is anathema to the openness we value as a community,” said Ivy Bottini.

Troy Perry, in an interview with The Pride Los Angeles said, “We always tried to be inclusive and take care. I don’t want to tackle the board but they need to listen to the community.”

“I am hoping the board will meet again,” he said.

Note:  Wehoville.com has posted tax-returns from Christopher Street West and the names of the 2016 board.  Their names and affiliations, as reported at Weehoville.com are: