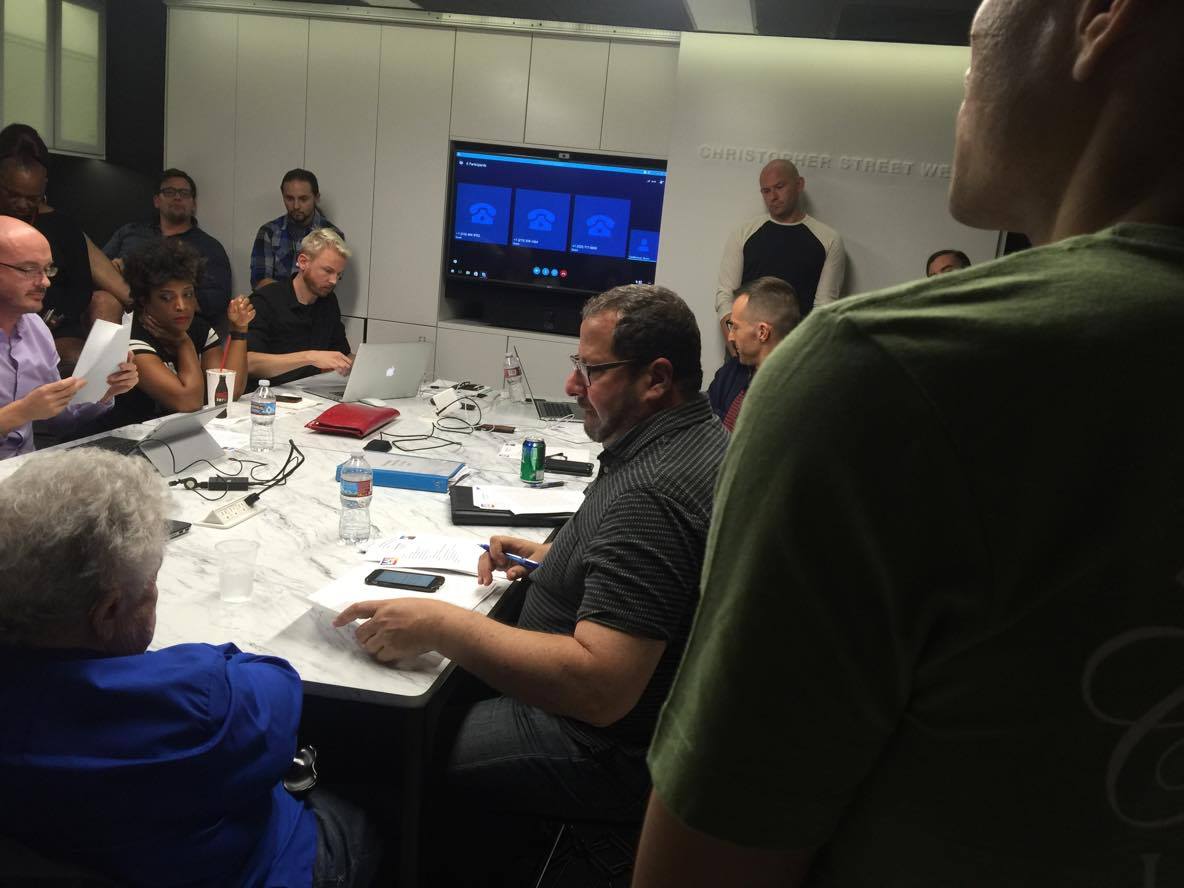 BY TROY MASTERS  |  “Pride is not just about the millennials, it’s about old lesbians, old gay men too. Get along, people!  It’s just silly.  Let’s fix this.  I hate the fighting,” said San Fernando Valley resident and marriage equality activist Diane Olsen, hoping to set a more civil tone at the May 16 West Hollywood City Council meeting where the management of LA Pride by Christopher Street West’s board of directors was a subject of great energy.

But her call for peace fell on deaf ears as CSW critics and defenders squared off.

Some even pointed fingers at City Council.

“I am very disturbed by what’s happening with CSW and in this community.  I understand John Duran and John D’Amico were kind of acting as liaisons to CSW. John Duran — I cannot believe that both you and Councilman D’Amico didn’t know ahead of time that CSW had intended to transform this event into a music festival,” exclaimed 90-year young activist Ivy Bottini.  “I can’t believe you didn’t know it ahead of time.”

“For you not to reach out into the community to say ‘this is what they are planning’ and talk to strategic people makes you culpable in creating the mess we’re all in. I would like some answers…I really would,” Bottini demanded.

Later in the meeting Duran called Bottini out: “Ivy knows she can call me anytime.”

But, at least in the early part of this meeting, some community members came to defend CSW..

Joshua Michael of West Hollywood said, “I’d like to ask everyone to take a deep breath and just evolve with what’s happening,” noting that activism plays a role in the parade and that the festival has always featured musical performances. Michael also pointed out that, “Last year’s spotlight was on PrEP and in 2016 the spotlight is on the AIDS crisis in communities of color.”

Terry Zeller read aloud a statement from Pat Rocco, the 82-year old Hawaii resident who was CSW’s first president and one of the founders of the Pride Festival. “After reading that article online, it is with much dismay that I see elements of our community have taken it upon themselves to question all the good works and decisions that CSW has made. This has rubbed me the wrong way,” Zeller quoted Rocco as saying.  “Changes happen when an entire board finds it necessary.”

But Peter Cruz, Asian Pacific AIDS Intervention Team (APAIT) Associate Director, an organization that has joined transgender activists in leading the boycott against LA Pride 2016, said CSW has “yet to commit that they will make the trans and lesbian celebrations a permanent part of Pride weekend.”

Transgender marginalization and inclusion has been one of APAIT’s chief complaints.

“CSW has given inconsistent answers as to why they are limiting the number of organizations and groups from being exhibitors at this year’s event. First they say it’s because festival grounds are smaller this year. Then they say they are planning ahead for next year’s smaller layout,” exclaimed Cruz. “Then they say it’s for public safety. So what’s the answer?”

CSW President Chris Classen defended the board’s work. “Planning the event requires thousands of moving parts but it also requires listening. It also requires compromise,” he said, appearing somewhat humbled.  “We make thousands of decisions every year and not all of them are correct.  We try to engage communities and we also listen.”

Several speakers also spoke in support of CSW and their efforts.

Van Jazmin, a featured artist at this year’s festival, said, “I don’t think the people who rail against LA Pride know who they are hurting in the process. I don’t think they know the hard work or details that go into the planning.”

James Gilliam, Deputy Executive Director of the ACLU of Southern California, said his organization stands with #notourpride in their boycott of LA Pride festivities.  Gilliam rebutted criticism that critics of CSW do not appreciate the complexities of producing an event like LA Pride.  “I was producer of Pride in Nashville for 7 years so I know what it’s like to do these events in cities that are not as supportive as West Hollywood,” he said.

Gilliam requested that the City Council look at how CSW’s board is empaneled. “Make sure it is an open process,” he implored.

Even city leaders seem a little exasperated by the bickering.

John Leonard, The City of West Hollywood’s revenue manager, discussed the economic impact and demographics of events like the Pride Festival.  The Pride event, the largest event in West Hollywood, has an estimated economic impact on the city of $9,200,000.  Of attendees to all of the special events, 62 percent are millennials (18-34), 85 percent of whom do not live in the city but who travel to the city for the event from within a 50 mile radius. Leonard pointed out that the public relations value of LA Pride is both unquantifiable and invaluable and offered that 31,000 social media users shared information about the event that reached millions of people.

The value of portraying WeHo as a safe haven should not be undervalued, he suggested.

The information suggests that CSW’s famous pivot toward millennials may be backed up by data. But the demographic is not the financially rewarding jackpot the city may be banking on in providing hard cash, subsidies and services.

West Hollywood Mayor Lauren Meister pointed out that more than $500,000 dollars in taxpayer cash and services is spent on LA Pride and perhaps more effort should be made to understand the return on investment.

City Councilman John D’Amico noted that only $165,000 in hotel taxes and $94,000 in general tax revenues were generated by the event.  “These events do not put people in hotel beds. That’s what we’ve learned. We all thought (otherwise),” he said.

The day after the council meeting, CSW held a board meeting attended by about 25 concerned community members. Commenters repeated the previous night’s points directly to a clearly exasperated board.

For over 30 minutes, speaker after speaker assailed the board on a variety of issues.

“You are selling us out,” said one. “You guys are playing games,” said another. “You have a blatant disregard for the community.” “You are slapping everyone in the face.”

“They spent $30,000 decorating this tiny room? With what money? I thought CSW lost money!,” one person whispered.

Ivy Bottini again just laid it all out there. “I consider the board a lame duck board. There shouldn’t be any decisions made about next year. Do not touch the bylaws. Don’t touch the mission.  Try to figure out how we are going to get some education in this festival,” she said.

“It doesn’t feel like you understand what Pride is,” Bottini said, “because you are all about money.”

After the public commenting period ended, Jeff Consolletti, the lead producer of LA Pride Festivals since 2009, was asked to update the board on the status of his work.  He said many organizational “elements are still in limbo. There is still plenty of time to wrap things (stage programming) up but there are a lot of items that need to be addressed.”

Among those items is Transgender programing and staging.  Consoletti said he had “received a phone call” regarding programming for the transgender stage programming. Subsequently, it was revealed that Rachel Rose Luckey, a member of the boycotting community, had  direct communication with members of the CSW board and with Consoletti about transgender issues, acting as de facto advisor on behalf of the transgender activists. Read Luckey’s public letter to The Pride LA in which she complains she was not contacted in the reporting of this article nor given a chance to respond.

That news drew a collective gasp from the room as boycotters expressed outrage that one of their own had gone rogue. About 15 people immediately left the room, shouting down the echoing hallway. “CSW knows this is classic divide and conquer strategy,” said one of them. “Who the fuck does she think she is?” asked another.

The meeting lasted well into the evening, during which CSW board member Maquita Thomas said nothing.  At a previous meeting, she interrupted dialogue between board members and commenters, later reminding the board they were under confidentiality agreements. No member of the board addressed any commenter during the most recent meeting or after.

Ivy Bottini had the last word.  As she was leaving CSW’s small office at the Pacific Design Center, the sharp-witted 90 year old tripped over a set of steps, breaking her ankle, dislocating a finger and leaving a substantial gash in her head.  She was taken by ambulance to Cedar-Sinai Medical Hospital and now faces weeks in a rehabilitation facility.

When asked by phone which finger she had dislocated, Bottini didn’t miss a beat:  “The one you flip people off with.”