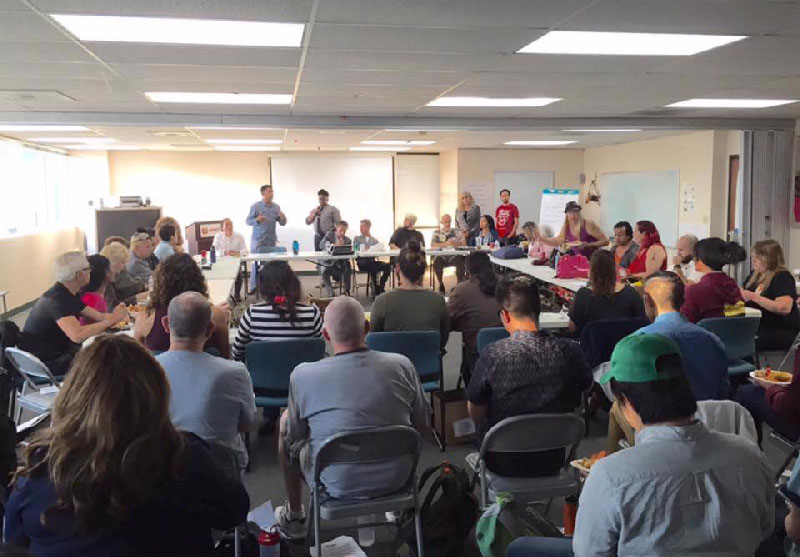 BREAKING: “The #NotOurPRIDE group voted tonight to end the boycott, with 22 voting to end, 2 voting to continue, and 3 abstaining. Many people spoke expressing various opinions and thoughts.

People feel there is a lot to be done, however.

CSW met the core demands of the movement,” so says a statement emailed to The Pride LA.

In a statement he posted to his Facebook page, Asian Pacific AIDS Intervention Team (APAIT), Peter Cruz says the boycott accomplished a number of important things.  He conceded that some items remain unaddressed.

“Last night (Thursday  May 19), community members voted to end the ‪#‎NotOurPride‬ boycott of‪#‎LAPRIDE2016‬. Since its inception, our movement was focused on three specific concerns with this year’s festival: 1) the significant reduction of the Friday night trans and lesbian celebrations, 2) the increase in festival ticket prices, 3) the rebranding of the event as a music festival. I personally feel that we have addressed these three objectives, which is why I voted to have the boycott lifted. I feel that we should all be proud of everything we have accomplished in the last 2 weeks:

1) In their statement last Friday, CSW announced that they would reverse their decision to reduce the hours of the Friday night trans and lesbian celebrations. After our meeting with CSW Thursday afternoon, they affirmed their commitment to make both celebrations a permanent part of LA Pride weekend. Additionally, CSW confirmed that they will be providing production support for the trans celebration, as well as a budget to secure performers for the evening.

2) In their Friday statement, CSW announced that Friday night will be a FREE event for the ENTIRE COMMUNITY! Friday night events include the reinstated trans and lesbian celebrations, Dyke March, Youth Dance, Vogue Ball, along with performances by Krewella, Faith Evans, Da Brat, and Maria Jose. This was a significant gesture for CSW to make in order to make the festival more accessible and inclusive. I commend them for making this decision, despite the financial impact that it caused.

With regard to the ticket distribution program, CSW will be reaching out to the Transgender Service Provider Network to request their assistance with distributing tickets to communities in need. Since many of the agencies who are a part of TSPN, APAIT included, also provide services to other LGBTQ communities, I believe that TSPN would be able to ensure that festival tickets are distributed to individuals in need.

3) CSW has removed MUSIC FESTIVAL from all marketing and promotional materials, including the banners that have gone up throughout the city.

4) With regard to the exhibitor program, CSW stated that there are approximately 50 booths available at the festival for non-profit organizations and sponsors. The final number of booths will be determined after the walkthrough with the fire marshal. CSW also stated that they will allow non-profits to split the cost of a booth and share a 10×10 space. Organizations that wish to be exhibitors at this year’s festival must make their request through the LA Pride website by 6pm today. If organizations cancelled their booth in support of the boycott, they must also reapply through the website by 6pm today.”

Cruz then pivots to more thorny issues that remain unaddressed and which are already on the radar of many high-profile local government officials and veteran activists.

“I understand that while we accomplished a lot in a very short period of time, there are still some remaining issues that need to be addressed before everyone can be assured that this situation doesn’t happen again. I agree with members of the community who are calling for more community input when planning future events, more financial transparency, a donation based model for festival admission, the reinstatement of community awards, and for more community representation in the CSW Board of Directors. I believe that we have all earned a seat at the table to continue the dialogue with CSW to address these additional issues for future festivals. I commit to being a part of those discussions, if requested to do so,” Cruz writes.