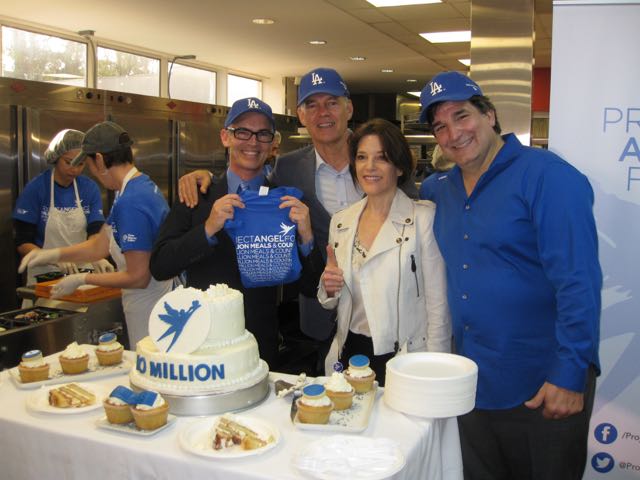 BY KAREN OCAMB   |   For many in the LGBT community, Democratic presidential candidate Hillary Clinton’s recent odd AIDS gaffe yanked back painful old memories of the height of the AIDS crisis. One of several Los Angeles HIV/AIDS organizations that was forged in the fire of that despair was Project Angel Food,  founded in 1989. On Friday, March 18, Project Angel Food marked a monumental achievement: preparing, packaging and delivering its 10 millionth free nutritious meal to people living with HIV/AIDS, cancer, heart disease, kidney failure, lung disease and other debilitating and soul-scorching illnesses.

On hand to commemorate the occasion at the organization’s Hollywood headquarters with new gay Executive Director Richard Ayoub were founder, best-selling author and spiritual guru Marianne Williamson, out Los Angeles City Councilmember Mitch O’Farrell, who volunteered during the early days and proclaimed March 18 “Project Angel Food Day.” Also there were former director John Gile and scores of volunteers such as Ron Penachio (who has volunteered every Friday for 8 years) and board members, including Board VP Bobby Ralston, his guest, retired NFL player Anthony Alabi, and Tim Robinson.

Local news stations covered the final packaging of the 10 millionth meal “live,” after which there was an unveiling of artist Colette Miller’s latest global wings work on the side of the Project Angel Food headquarters.

“We couldn’t have reached this milestone without the thousands of caring and committed volunteers and supporters who help Project Angel Food serve the most vulnerable among us, meeting an ever-increasing demand for our program,” Ayoub said. “Every day, more and more sick and hungry Angelenos reach out to Project Angel Food looking for help. We will continue to provide those who need us with life-sustaining – and life-affirming – services at no charge as long as it takes.”

Ayoub also launched a social media fundraising campaign whereby individual donors can be angles by sending a text on their mobile device using this process: Project DONATION AMOUNT YOUR NAME (i.e. Project $100 Robert) to 91999. You will receive a link with payment info and your name will appear online with other donors. Their goal is $10,000.

In a moment after the cake cutting, I asked Marianne Williamson about the beginning of Project Angel Food as an outreach program of the Los Angeles Center for Living.   As often happens when people remember those days, Williamson moved from recalling the facts to choking back tears describing the spiritual power of the gay men who refused to go gently into that good night.

Williamson said:
“Project Angel Food grew out of my lectures. Shortly after I began lecturing on A Course in Miracles, the AIDS crisis burst full-blown onto the scene. At that time, the medical community had nothing to offer. Fortunately, that changed in time.

But not only was the medical establishment able to offer nothing at first, organized religion, institutionalized religion had to move through their own issues – homophobic and otherwise. So there was at that time, this then-young woman over on Los Feliz talking about a God who loves you, no matter what. And miracles. And gay men started coming to my lectures.

So it wasn’t that I said, ‘let’s do this.’ It’s that this is what was in front of me in my life. Also my own sister was dying of breast cancer at that time. So originally the idea that came to me had to do with providing non-medical support for people with life-threatening illnesses. My sister’s issue was cancer, but when we did our first fundraiser, and I saw all of these gay men who came to my lectures – many of whom were HIV [positive] themselves, all dressed up in their tuxedos, making this party – and you know if they did something, it’s not just going to be a party, it’s going to be the most glamorous party, the most beautiful party. And I looked around and I thought, this is mainly a response to this crisis. And this is theirs. And I felt —and still feel—that spiritual seeking without service is kind of narcissism.

So it always was a way for us to serve. It wasn’t just for the people who were ill. And in fact, that was the point and that was the profundity. It was that people who themselves had the disease—many of the original volunteers, many of the original board members were themselves HIV – many of whom did not survive. So the initial group of people who really brought it to the fore had themselves been diagnosed but they said: ‘This is something we can do.’ It wasn’t just passive, ‘OK, we’re going to go sit and die now. We’re going to do something and we’re going to be there for each other.’ And so it was all part of a piece because there were support groups—Louise Hay was doing them also and she was originally on that board—so the whole notion of the love really grew out of a particular spiritual perspective.”

Williamson said she subsequently met David Kessler, who was a nurse and grief expert who taught care providers how to also take care of themselves. Kessler had business acumen, Williamson said, which was “important” to figuring out how to make their dream of service possible. She said:

But Project Angel Food grew out of deep prayerfulness among hundreds of people and that love and that call and that response. And I think when you ask God—and I saw so clearly at that time—‘Dear God: Help us.’ And when you ask God to help you, he responds by showing you how you can be of help to someone else.

That’s what lifts you out of your suffering—by showing up for the suffering of someone else. And so there were so many people whose final days were spent in a level of peace and enthusiasm: ‘We were doing this. We were doing something major!’

And I will never forget how many of those guys showed up in their tuxedos with their Kaposi Sarcoma….”

It was a time when dying gay men and their allies where the spiritual vanguard, offering hope to those brutalized by marginalization, political bashing and spiritual starvation at the hands of calculated religious opposition. Project Angel Food appeared to feed the body, mind and soul.  It still does.