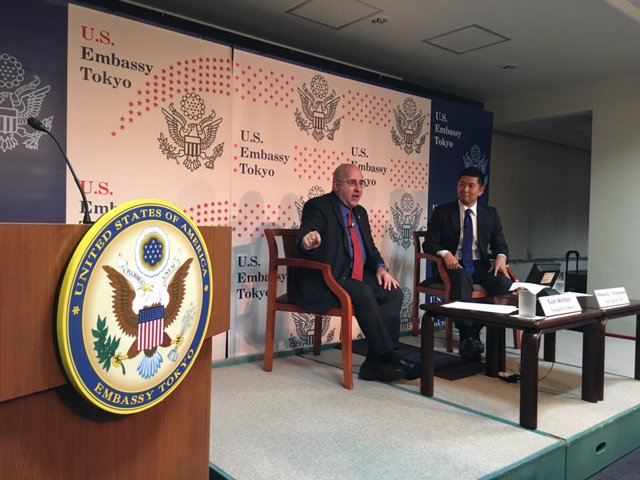 BY MATTHEW S. BAJKO  |  A gay attorney who spent decades fighting for marriage equality in the U.S. is exporting the lessons he learned to LGBT advocates overseas.

Evan Wolfson, who founded and served as president of Freedom to Marry, the not-for-profit agency which decided to close its doors once marriage equality was achieved, is in Japan this week on a trip sponsored by the U.S. State Department and local LGBT groups in the Asian country.

His schedule will take him to four cities: Tokyo; Osaka; Sapporo, the capital of the mountainous northern Japanese island of Hokkaido; and Naha, the island capital of Okinawa Prefecture. His daily itinerary over the course of the 10-day trip is jam-packed with meetings, speeches, strategy sessions, and media interviews.

“The U.S. Embassy here in Tokyo is working with local activists to arrange the visit and is contributing to the cost of the visit,” said Wolfson, who was reached by cellphone Friday, February 19 the morning after his arrival. “This is the second time I have been invited to speak in another country about the lessons about our Freedom to Marry campaigns as a guest of the United States government.”

In October Wolfson spent two weeks traveling to seven cities in three Western European countries during which he met with LGBT advocates and organizations; dined with local business leaders and members of parliament, as well as the U.S. ambassadors in Switzerland, Austria and Germany.

“In Germany and Austria there is significant debate about having a parliamentary bill in favor of Freedom to Marry. Also litigation is ongoing there,” he said. “In Switzerland there is right now an amendment being pushed by the more conservative political party that pretends to be about fixing the tax code in regard to marriage but really is smuggling in restrictions on same-sex couples. It is a Trojan horse amendment.”

He dubbed the trip his “Rainbow Tour” and is referring to his Japanese visit on Twitter as the “Rainbow Tour II.”

“As somebody who spent most of his life suing the government, it gives me great pride our Freedom to Marry campaign and the progress America has made now puts our country on the right side of important human rights questions and setting a good example to others to respond to,” said Wolfson, who left the Lambda Legal Defense and Education Fund in 2001 to launch Freedom to Marry.

His legal fight to secure marriage rights for the LGBT community in the U.S. dates back to the early 1990s when he and another attorney sued the state of Hawaii on behalf of three same-sex couples. The Hawaii Supreme Court’s 1993 decision that the state could not exclude the couples from its marriage statutes marked the first time a court issued such a ruling.

But it also sparked a backlash, resulting in the 1996 passage of the federal Defense of Marriage Act that defined marriage for federal purposes as the union of one man and one woman. The homophobic law also allowed states to refuse to recognize same-sex marriages legally recognized by other states. State level DOMAs were also passed across the country.

Wolfson devoted the next two decades of his life devising ways to strike down the marriage equality bans and achieve legal victories in both state and federal courts. A key portion of DOMA was struck down in 2013, allowing the federal government to recognize state-sanctioned same-sex marriages, and last June the U.S. Supreme Court abolished it entirely when it ruled 5-4 that gays and lesbians had a constitutional right to wed.

Following the victory, Wolfson and his cohorts at Freedom to Marry began to wind down the group. It re-launched last year as Freedom for All Americans, focused on battling anti-LGBT laws in statehouses and pressing for federal LGBT protections in housing, employment and other areas.

They also wanted to ensure the lessons and strategies learned from the marriage equality fight were not lost. Thus, the staff’s last task was to write down all the things they learned in winning marriage so that it could be shared with other progressive campaigns.

“We are seeing tremendous eagerness on the part of many organizations and many different causes and many countries to learn the lessons from the successful Freedom to Marry campaign in the U.S. and adapt them to other fronts,” said Wolfson. “I am spending a lot of my time now, and will even more over the months ahead, advising and assisting a whole variety of movements in the U.S. and overseas as they push forward.”

The international trips are one way for Wolfson to achieve that goal on a global scale.

“Japan does not yet have the freedom to marry or any national level recognition of same-sex relationships. Nor does it have a clear national non-discrimination law,” noted Wolfson. “While Japan also doesn’t have some of the most negative features other countries have, it is lagging behind other leading pluralistic democratic rule of law countries now. There is a lot of progress still to be made, particularly given Japan’s constitution has strong guarantees in favor of individual freedom and equality for all.”

His trip began just days after a member of the Suginami Municipal Assembly in Tokyo made headlines for saying gay, lesbian and bisexual people refer to themselves so out of “personal taste” and thus are not worthy of support by municipal governments, according to a story posted online by Japan Times.

Suginami Ward Assemblywoman Yumi Kobayashi, 27, was quoted as saying during an assembly session February 15 that such sexual minorities are “fundamentally different” from transgender people, “who are clearly disabled and should be legally protected” but questioned whether it’s “medically clear” if lesbian, gay, and bisexual people “are disabled or not.”

The story also quoted Kobayashi as asking, “Is it really necessary for local governments to spend a lot of time and money on issues relating to sexual orientation or personal taste?”

The embassy did offer a live feed of a talk Wolfson gave Monday, February 22 via its YouTube page that it also promoted via its Twitter account.

In an emailed reply, Kazuhiro Terada, the president of the Equal Marriage Alliance, a local Japanese group that just celebrated its second anniversary, wrote that Wolfson’s trip will hopefully provide momentum to the drive for marriage equality in the country.

“Evan Wolfson’s experiences of actually realizing marriage equality is incredibly beneficial to EMA Japan and our work here in Japan. Though there are differences between Japan and the US, we can learn a lot from how Evan and his organization, Freedom to Marry, achieved the goal there,” wrote Terada. “Currently, the Japanese government’s movement is slow on the issue, but at the local governmental level, a few municipalities have started to recognize same-sex partnerships.”

EMA Japan’s goal is to achieve marriage equality by 2020, when Tokyo hosts the Olympics and Paralympics. The focus to date has been on lobbying government officials rather than filing court cases, because past court decisions on the matter have been “quite conservative in general,” explained Terada.

“While there has been increasingly more discussion on the topic of marriage equality in Japan, especially since the U.S. Supreme Court’s decision, there are still many Japanese people who do not consider it a serious issue,” he wrote. “Through sharing Evan’s story, it is our hope that we can begin changing the hearts and minds of Japanese citizens across the country to realize the necessity of ending discrimination against the LGBT community.”

The embassy did offer a live feed of a talk Wolfson gave Monday, February 22 via its YouTube page that it also promoted via its Twitter account.

Later this year Wolfson has been invited to meet with marriage equality counterparts in Australia. He is also talking with people in Taiwan, Thailand and Vietnam fighting for LGBT rights.

“I feel very excited that people know the campaign we had in the U.S., with all its stumbles and successes, offers real lessons that can be adapted to work on other fronts and other countries,” said Wolfson.