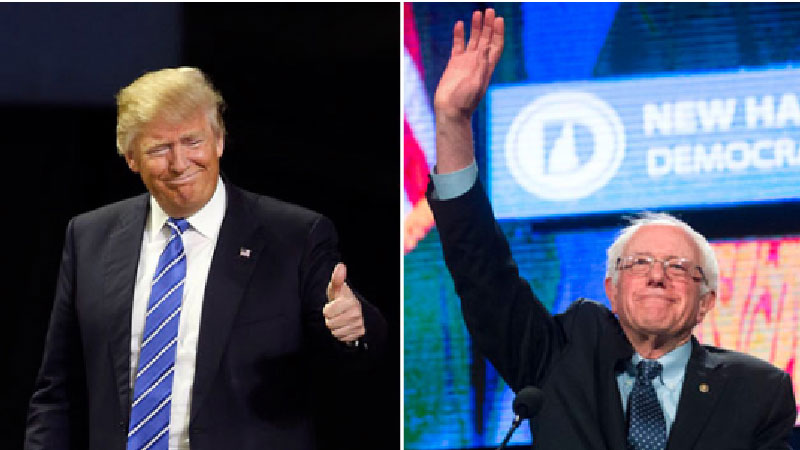 BY CHRIS JOHNSON  |   Donald Trump and Bernard Sanders were the winners by significant margins Tuesday in New Hampshire primaries for the respective presidential primaries.

Major media outlets declared both candidates were the winners of the contests immediately upon polls closed in the state at 8 p.m.

With 67 percent of precincts reporting, Trump claimed 34 percent of the vote in the Republican primary, followed by John Kasich at 16 percent, Ted Cruz at 12, Jeb Bush at 11 and Marco Rubio at 10 percent, according to local ABC affiliate WMUR9.

Each of the other candidates earned less than 10 percent of the vote, including Chris Christie, who was considered to have badly needed a win in the state. Eyes were also on Rubio after his third place finish in Iowa to see his if his widely panned debate performance Saturday would affect his New Hampshire results.

On the Democratic side, with 48 percent of precincts reporting, Sanders won 60 percent of the vote compared to 39 percent won by Hillary Clinton. Sanders secured a divisive win in the state after a virtual tie between him and Clinton in Iowa.

Consistent with his pledge in his campaign, Trump said during his victory speech in Manchester “we’re going to start winning again.”

Kasich, taking the prize as the “establishment” winner in New Hampshire among Republican candidate, pledged in his speech at the Grappone Conference Center in Concord to lead followers “to solve the problems of America.”

Christie, following poor showing in New Hampshire, said he’s “taking stock” of the situation, which could be a signal he will soon drop out of the race.

Celebrating his victory at Concord High School, Sanders seemed to wipe away a tear from his eyes and thanked supporters who campaigned for him in New Hampshire.

“Together, we sent a message that will echo from Wall Street to Washington, from Maine to California, and that is that the government of our great country belongs to all of the people and not just a handful of wealthy campaign contributors and their Super PACs,” Sanders said.

In her concession speech at Southern New Hampshire University, Clinton congratulated Sanders on his win, but took a page from his book by pledging to tackle campaign finance reform and rein in Wall Street.

“We also agree that Wall Street can never be allowed to again threaten Main Street, and I will fight to rein Wall Street,” Clinton said. “And you know what? I know how to do it. So when I tell you no bank can be too big to fail and no executive too powerful to jail, you can count on it.”

Seemingly talking a knock at Trump and the nature of his campaign, Clinton said, “People have every right to be angry, but they’re also hungry, they’re hungry for solutions. What are we doing to do?”

Chad Griffin, president of the Human Rights Campaign, said on Twitter after the results were announced Trump is hostile to LGBT rights unlike Clinton. His organization endorsed her last month.