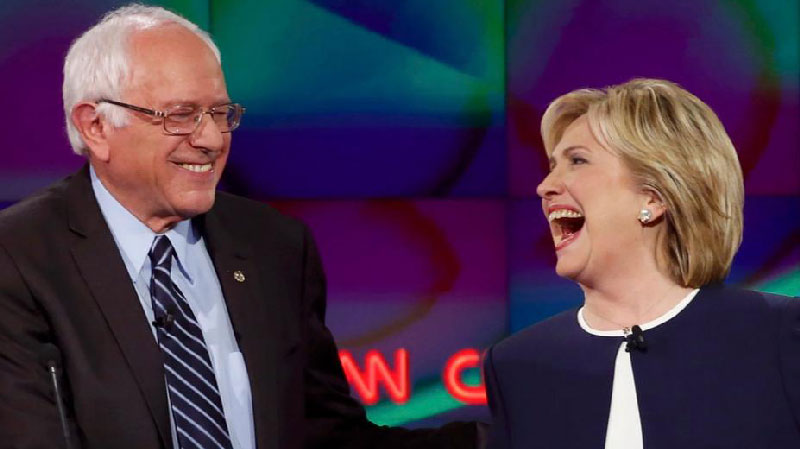 BY TROY MASTERS  |  “I’m not evolving when it comes to gay rights. I was there!” That’s the quote – a not so subtle dig at Hillary Clinton – that many Bernie Sanders supporters claim prove he’s a more progressive and better candidate for president than Hillary Clinton.

But was Bernie really “there” on gay rights before Hillary?

While serving as mayor of Burlington in the 1980s Sanders told an interviewer that LGBT rights were not a “major priority.” He stated that he was “probably not” going to support a bill that provided job protections for LGBT people. Perhaps at the time a willingness to even consider gay rights was deemed progressive.

His supporters cast Sanders as a kind of pioneer for marriage equality and often point to his opposition in 1996 to the Defense of Marriage Act, which barred the federal government from recognizing same-sex marriages.

Sanders was one among the 57 House members who voted against DOMA, the bill signed into law by then-President Bill Clinton and later overturned by the 2015 Supreme Court marriage equality decision. However, Sanders’ stated rational was that DOMA violated the Full Faith and Protection clause of the US Constitution, a provision that requires contracts and laws of one state be honored by every other state. At the time, in many interviews, he made no mention of protecting the rights of LGBT people.

By 2006, Sanders was still not a marriage equality supporter. He told the the Vermont-based Times Argus that Vermont should not legalize same-sex marriage, at least “not right now, not after what we went through [the debate over DOMA].”

When pressed recently on these facts by MSNBC’s Rachel Maddow, Sanders said, “I felt that at the time, given Vermont had gone first in breaking new ground [in 2000], let’s take it easy for a little while. That was my reasoning.”

Vermont didn’t legalize same-sex marriage until 2009, and though Sanders was supportive of it’s passage, he did not campaign for it.

So, if the debate boils down to who evolved first, Hillary or Bernie, it just not all that clear.

During her husband’s first run for president, Clinton took a question on same sex marriage from reporter Andrew Jacobs, then of QW Magazine, a New York LGBT magazine, at a Manhattan women’s fundraiser. Clinton’s answer was thoughtful: “I think that question is one that is best left to the state and local government.”

She has maintained that her policy on the matter has not wavered.

“My position is consistent,”Clinton told Gay City News in 2006. “I support states making the decision. I think that Chuck Schumer would say the same thing. And if anyone ever tried to use our words in any way, we’ll review that. Because I think that it should be in the political process, and people make a decision, and if our governor and our legislature support marriage in New York, I’m not going to be against that.”

In 2013 Clinton came out in unmitigated support of marriage equality.

The best that can be said of both candidates is they have been part of a slow evolution. One should not disparage the other over LGBT issues since the score appears to be about even.

There are areas, like opposition to the death penalty and a single-payer healthcare system, where Bernie Sanders is far more progressive than Hillary Clinton.  It is those differences where Bernie’s progressive credentials should rightly be trumpeted.

On gay rights Bernie and Hillary are even.