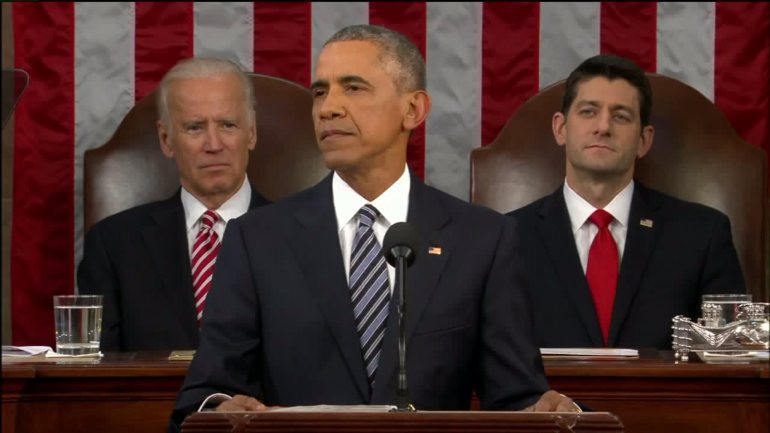 BY LISA KEEN  |  In his eighth and final State of the Union address, President Obama on Tuesday seemed intent on both acknowledging the nation’s rifts and binding together those disparate parts with a “common creed” devoted to democracy.

Unlike in some previous addresses, President Obama did not call for specific actions to promote equality for LGBT people, but he did pay tribute to both large and small victories of the movement. He referred to marriage equality once, uttered the word “gay” once, and urged Americans to appreciate and celebrate the nation’s “diversity” and “commitment to the rule of law.” And he included lesbian astronaut Sally Ride in his short list of American historical legends.

“[W]hen I no longer hold this office, I’ll be right there with you as a citizen, inspired by those voices of fairness and vision … –voices that help us see ourselves not first and foremost as black or white or Asian or Latino, not as gay or straight, immigrant or native born; not as Democrats or Republicans, but as Americans first, bound by a common creed,” said President Obama. “I see it in the soldier who gives almost everything to save his brothers, the nurse who tends to him ‘til he can run a marathon, and the community that lines up to cheer him on. It’s the son who finds the courage to come out as who he is, and the father whose love for that son overrides everything he’s been taught.”

“I can remember hearing Presidents give speeches that included a line or two that was more historic or that moved me more strongly,” said Jean, “like when [President Bill] Clinton mentioned gay and lesbian people from the capitol steps in Arkansas the night he first won the Presidential election. Or, in last year’s State of the Union, when Obama mentioned transgender people. But I do not remember any previous State of the Union address that has seemed as aspirational and optimistic–that represented the kind of clear-eyed leadership that our nation so desperately needs.”

“From an LGBT perspective, I was happy to hear him highlight the fact that ending HIV/AIDS is within our grasp.  I liked that he mentioned Sally Ride.  And, I was really touched by his use of a coming out metaphor as an example that epitomizes what makes America great,” said Jean. “Plus, I loved his concept of unarmed truth and unconditional love having the final word.  Anytime that happens, our community benefits.”

Both President Obama’s address and the Republican Party’s response, delivered by South Carolina Governor Nikki Haley, spoke against conflicts that target religions. President Obama said he opposes “politics that targets people because of race or religion,” but he said nothing of those who use religion to target people because of their sexual orientation or gender identity. Haley said that, if Republicans held the White House, “We would respect differences in modern families,” an apparent reference to same-sex couples marrying. But she said Republicans would “insist on respect for religious liberty as a cornerstone of our democracy.” She said nothing of the constitution’s equal protection clause and attempts by some to claim that personal religious beliefs trump that clause.

“I was far more impressed by Governor Nikki Haley and her call to ‘respect differences in modern families’ while at the same time balancing that respect with a concern for religious liberty — a position Log Cabin Republicans has long advocated,” said national Log Cabin Republicans President Gregory Angelo. “It was refreshing to see a Republican explicitly acknowledge that on a major national stage.”

Unlike in previous addresses, President Obama did not point to guests in the gallery to illustrate issues he talked about in his speech. Two gay men were among the 23 guests seated with First Lady Michelle Obama in the Congressional gallery during the State of the Union. One was Jim Obergefell, a lead plaintiff in one of four cases that successfully challenged state bans on marriage for same-sex couples. The other was Ryan Reyes, whose partner Daniel Kaufman was killed during the December 2 terrorist attack in San Bernardino.

The White House press release characterized Obergefell, who hails from Cincinnati as an “accidental activist,” who challenged Ohio’s refusal to recognize his marriage to John Arthur on Arthur’s death certificate. The couple, who had been together for 20 years, became the focus of national attention in 2013 when they had to rent a private jet to enable Arthur, who was near death from ALS, to travel to Maryland so they could obtain a marriage license.

The press release identified Reyes as an “activist” who spoke out following the Kaufman’s death at the hands of two Muslims to discourage hostility toward Muslims.

Reyes, who contacted The Pride LA from The White House where his mom was hosted while he attended the State of The Union Speech, said that sitting behind Michelle Obama in an empty chair that represented Daniel Kaufmann, his partner, who was killed after he saved 4 people in the terrorist attack in San Bernardino was “like being suspended in grace.”

Another LGBT activist in the Congressional gallery Tuesday night was 32-year-old Alicia Garza, a co-founder of Black Lives Matter, an organization to respond to anti-black racism in American society. Garza attended as a guest of her member of the House, U.S. Rep. Barbara Lee (D-Calif.).

Anti-gay activist Kim Davis was also in the House chamber for the State of the Union. Davis is the county clerk in Kentucky who refused to enforce the U.S. Supreme Court decision that said state bans on marriage for same-sex couples is unconstitutional. She did so, claiming it would violate her religion to issue marriage licenses to same-sex couples. Her attorney, Mathew Staver, issued a statement saying he, too, would be at the State of the Union address but he would not identify which members of Congress invited him or Davis. (Each member of the House and Senate can bring one guest.) On Monday, Davis attended a “State of the Family Address” by Family Research Council President Tony Perkins. Perkins told reporters FRC arranged for Davis’ attendance at President Obama’s address to the nation on Tuesday but he, too, refused to say what member of Congress invited Davis.

U.S. Senator Tammy Baldwin (D-Wisc.) invited a University of Wisconsin communications major, Britney Woods, to be her guest at the State of the Union address Tuesday night. According to a Wisconsin newspaper, Woods met Baldwin at a roundtable discussion on college affordability.

Guests of other members of the LGBT Congressional Caucus will include:

On Friday, 26-year-old lesbian Ingrid Nilsen, who has a YouTube channel with 3.8 million subscribers, will be one of three YouTube “creators” to “host a live YouTube interview” with President Obama. Nilsen says she has questions concerning LGBT issues and other matters that she hopes to ask the president. And she’s soliciting questions from her viewers to consider asking.

The White House will stream the YouTube interview live on youtube and at whitehouse.gov’s special State of the Union page. The event will begin at 2:15 p.m. ET. People can submit questions for consideration at #YouTubeAsksObama.