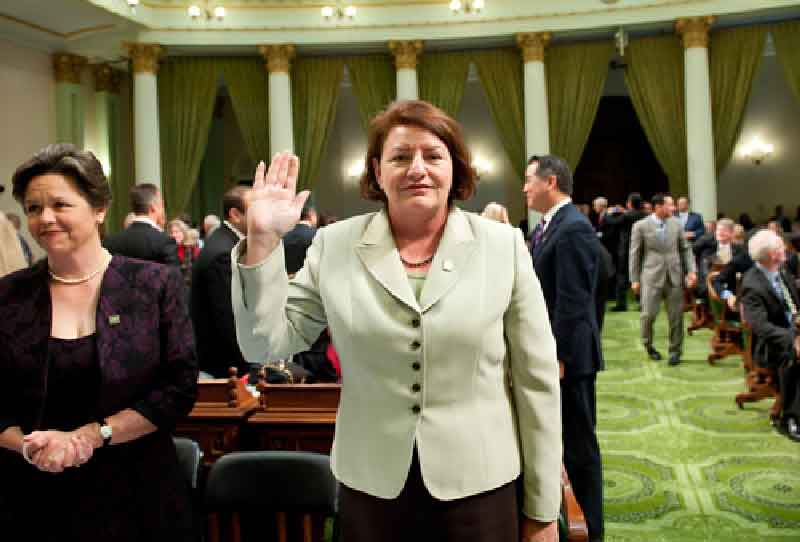 BY MATTHEW BAJKO  |  Outgoing lesbian Assembly Speaker Toni Atkins (D-San Diego) officially kicked off her 2016 bid for a state Senate seat over the weekend, yet she already has amassed a large campaign war chest for her race next year.

Termed out of the Legislature’s lower chamber next December, Atkins shocked the Statehouse in September when she announced she would run against state Senator Marty Block (D-San Diego) next year for his Senate District 39 seat.

In explaining her decision to reporters, Atkins claimed that Block had agreed to give up his seat after one term, so she could run. Block admitted to reporters that the two lawmakers had discussed such an arrangement but insisted he never agreed to step down next year.

Atkins, a former San Diego councilwoman and interim mayor, had been raising money to run for Block’s Senate seat five years from now. She had nearly $968,000 in her 2020 campaign account by November 5, according to a recent report by MapLight, a nonprofit research organization that tracks money’s influence on politics.

Atkins’ 2020 haul, money she can use for her contest next year, placed her second among the top five candidate-controlled campaign committees that have raised the most money for upcoming elections.

In first place, according to MapLight, was Lieutenant Governor Gavin Newsom who is running to be governor in 2018, when Governor Jerry Brown will be termed out of office. The former San Francisco mayor had raised $3,545,595 between January 1 and November 5 this year for his gubernatorial race.

And in third place in MapLight’s report was state Assemblyman Rob Bonta (D-Oakland), who has netted $554,075 for his re-election campaign next year. He is seeking a third two-year term in the Assembly.

Due to Atkins’ lame duck status in the Assembly – she was first elected to her 78th Assembly District seat in 2010 under rules, since changed, barring her from seeking more than three consecutive two-year Assembly terms – Atkins is stepping down from the powerful speaker position next year.

Succeeding her will be Assemblyman Anthony Rendon (D-Los Angeles). His election in September by his Democratic colleagues, who control the Assembly, marks the first time a straight lawmaker has won the speakership since 2009, when gay former Assemblyman John A. Perez (D-Los Angeles) became the first openly gay lawmaker named to the post. (Perez was sworn into the position in March 2010.)

Rendon is expected to become speaker-elect in early January, when the state Legislature reconvenes, and will be sworn in several months later. Under the state’s new term-limits rules, he could potentially serve as speaker until 2024.

It remains to be seen if Atkins, by relinquishing the speaker’s gavel and the influence that comes with it to shape legislative priorities in Sacramento, will be able to maintain her impressive fundraising totals going forward.

Atkins has yet to file a full fundraising report for her 2016 campaign account. But based on the filings for her other active campaign accounts, she likely has close to $1.6 million to tap into for her race against Block.

She also controls a ballot measure committee that still had $287,465 as of July 1 that could also potentially be used for her 2016 Senate run.

According to information filed with the secretary of state, Atkins this fall transferred $800,000 in leftover funds from her 2014 Assembly race into her 2016 Senate campaign account.

There is now nothing left in her 2014 account, according to the most recent filings, nor is there anything remaining in her 2020 campaign account. In October, she transferred $792,270 from that account into her Atkins for Senate 2016 campaign account.

Block, meanwhile, reported having $78,869 in his 2016 re-election campaign account as of July 1, according to the most recent financial disclosure filings. In July the California State Council of Laborers PAC gave him an additional $8,500.

According to Equality California, the statewide LGBT advocacy group, Atkins is one of seven known non-incumbent gay or lesbian Democratic candidates seeking state Senate or Assembly seats next year. All but one are running for office in southern California districts.

No known out Republicans, so far, have announced campaigns. Candidates for state office have until March 11 to file with elections officials ahead of the June 7 primary.

Of the current seven members that comprise the LGBT Legislative Caucus, Atkins is the lone out lawmaker this election cycle seeking to switch legislative chambers.

Gay Senator Mark Leno (D-San Francisco) and gay Assemblyman Rich Gordon (D-Menlo Park) are both termed out of office next December and are not running for a new political office in 2016.