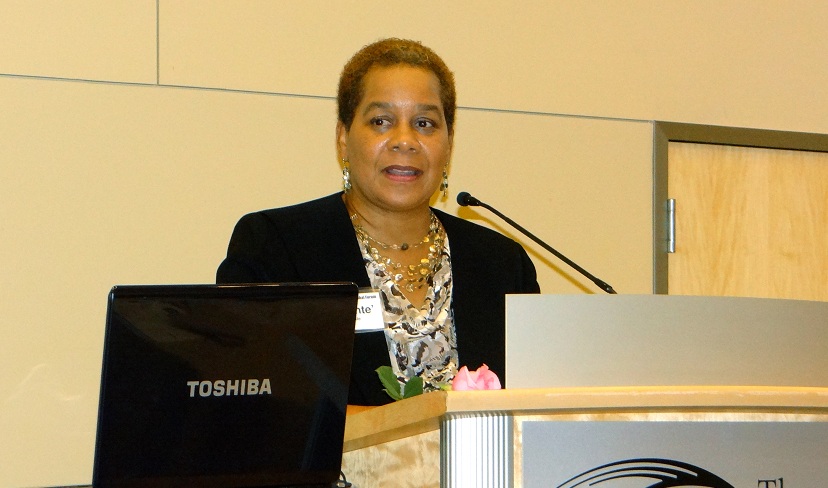 ⚫ BY MATTHEW S. BAJKO  A candidate running for a Los Angeles-area state Senate seat is facing questions from progressive groups about her stance on women’s and LGBT issues.

Within the last four weeks, both the California National Organization for Women and the East Area Progressive Democrats have raised concerns about retired Pasadena police lieutenant Phlunte Riddle, who is running for the state’s 25th Senate District seat.  The 25th District is comprised of Pasadena, Burbank, and Glendale, and a part of San Bernardino County.

Phlunte Riddle broke the glass ceiling when she became Pasadena’s first black female police sergeant in 1992 and female lieutenant in 1996. Her candidacy for State Senate is being scrutinized

Riddle’s campaign has hit back hard against the accusations, noting in recent press releases her support from female political leaders and her support for equal rights and reproductive rights. She has also hired a gay man, Jimmy Whittrock, to be her campaign manager.

Questions about Riddle first surfaced in June, after Ron Buckmire, a gay black man who is a professor at Occidental College, highlighted Riddle’s ties to several anti-gay Christian universities, such as Harvest School of Ministry in Altadena, in a post he wrote for the website http://www.laprogressive.com.

In response to Buckmire’s post, Riddle issued a statement in late June professing her support for a woman’s right to choose and LGBT issues.

Yet Riddle has continued to be scrutinized for her stances and ties to the Christian schools. Late last month, the state NOW chapter claimed Riddle is “not reliable on abortion rights” and questioned her position on LGBT issues.

The group’s August 26 statement, issued by its president, Jerilyn Stapleton, said it had “deep concern” about Riddle’s “record of complicity in anti-abortion and anti-LGBT policies.”

It pointed to her being an instructor in sociology at the “anti-abortion, anti-LGBT Biola University,” and claimed that Riddle “signed onto a code of conduct that bars abortion and ‘human intervention in any form after conception’ and allows punishment of faculty and staff for non-compliance with this strict ban.”

In an interview Monday with the Bay Area Reporter, Riddle said she has been surprised to come under attack so quickly in the race and refuted the accusations her critics have lodged against her.

“I don’t even know where some of these things came from,” said Riddle, 56, who has three grown sons with her husband. “But I understand this is how politics is done sometimes to undermine a candidate.”

During her time teaching several criminal justice classes at Biola, Riddle said she did sign the employment agreement the school required of teachers. But she pointed out that her syllabus included a non-discrimination clause that included sexual orientation and that she never witnessed any student being mistreated based on their sexual orientation or beliefs about abortion.

“The syllabus I used states everyone shall be treated with respect and dignity, and there will be no mistreatment of people for different sexual orientation, faith, or race,” said Riddle. “It said there will be zero tolerance for discrimination. That is what I taught.”

In terms of her stance on marriage equality, Riddle said she voted against Proposition 8, the 2008 ballot measure defining marriage in the state as between a man and a woman. She recounted how seeing the suffering an early partner of hers on the police force and his partner went through in the 1990s as he battled HIV informed her feelings on the issue.

“Equality for all is what’s right, and I stand behind it,” said Riddle, adding that in the case of public employees such as Davis, “She is a public servant, and as a public servant, she doesn’t have the right to bring her own beliefs into that job.”

As for the questions regarding her stance on abortion, Riddle said she has long backed a woman’s right to choose. She noted that when she served as interim executive director of the Pasadena chapter of the YWCA, she worked with Planned Parenthood to support its services and continues to do so.

Despite the questions about her policy stances, Riddle has lined up support from several women’s groups and female politicians, including state Senators Hannah-Beth Jackson (D-Santa Barbara) and Carol Liu (D-La Canada Flintridge), who will be termed out of the 25th District seat next fall.

The California Democratic Legislative Women’s Caucus, which Jackson chairs, has endorsed Riddle. In an August 31 announcement of its decision, the caucus noted it had asked Riddle “specifically and in detail” where she stood on reproductive rights and choice.

Republican Los Angeles County Supervisor Michael Antonovich is also seeking the seat. The top two vote getters in next June’s primary will face off against each other in the November 2016 election.

Matthew S. Bajko is an assistant news editor and the political columnist at the Bay Area Reporterin San Francisco.