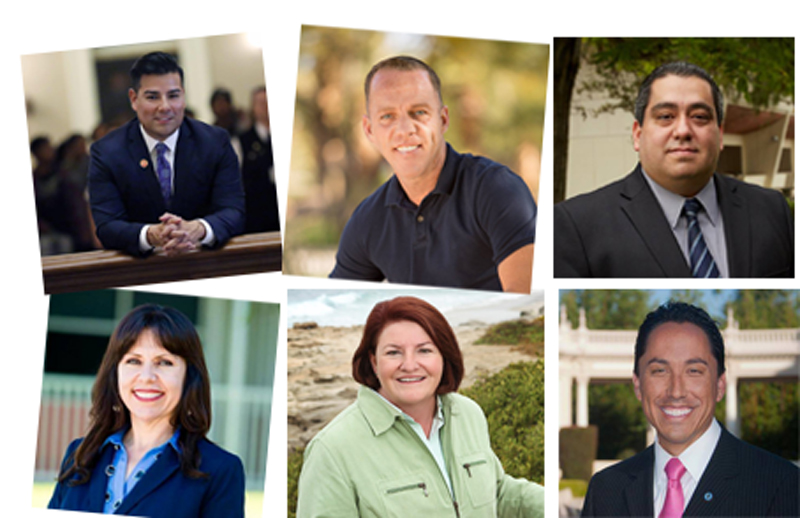 ⚫ BY MATTHEW S. BAJKO  |  With the June 7 primary now less than eight months away, a number of LGBT non-incumbent candidates have already launched campaigns for California legislative seats.

A growing number of districts throughout California are now competitive for LGBT candidates.

There are at least six gay or lesbian Democratic candidates seeking state Senate or Assembly seats next year, with all but one running for office in southern California districts. So far no known out Republicans have announced campaigns, according to the head of a statewide group for LGBT GOPers.

The list is likely to grow in the coming months, as electing LGBT candidates to the Legislature is a top priority for the LGBT Legislative Caucus in order to replenish its ranks. Three of its current seven members will be termed out of office next December, with the remaining four all seeking re-election to their respective seats next year.

Senate District 25
Current:  Carol Liu (D-La Canada Flintridge)
The 25th Senate district covers the Los Angeles County foothills from Sunland-Tujunga in the city of Los Angeles on the west to the city of Upland in San Bernardino County on the east. Along with Pasadena, the district includes the cities of Burbank and Glendale as well as most of the Angeles National Forest.

Seeking the 25th Senate District seat is Katherine Aguilar Perez-Estolano, an expert in urban planning and transportation who serves on the California High Speed Rail Authority. She lives with her wife, Cecilia Estolano, in Pasadena, and the couple co-owns with a third partner the consulting firm Estolano Lesar Perez Advisors LLC, which has offices in Los Angeles and San Diego.

The current officeholder, Senator Carol Liu (D-La Canada Flintridge), will be termed out next year and has endorsed Riddle.

Another non-incumbent candidate is Greg Rodriguez, who lives in Palm Springs with his husband, Alejandro, and his two adopted sons, Joshua and Zachary. He is seeking to oust from office next year freshman Assemblyman Chad Mayes (R-Yucca Valley) from his 42nd Assembly District seat, which covers most of Riverside and San Bernardino counties.

Earlier this year Rodriguez, who is HIV-positive, resigned as district director for Congressman Raul Ruiz (D-Palm Desert) two months before entering the Assembly race. He reported raising $49,420 so far for his campaign, which will likely be a long shot bid as the district leans Republican.

Nonetheless, in a statement in July announcing his fundraising at that point, Rodriguez boasted about receiving donations “from 190 unique individuals demonstrating strong grassroots support.”

He added that he is “humbled by the showing of such generous support this early in the campaign. My message to supporters about how I can be a better representative for all of the people in this district and my work in activism, education, government and my role as a father are not only being heard, but embraced.”

Running for the 48th Assembly District seat, currently held by Assemblyman Roger Hernández (D-West Covina), is Bryan Urias, a gay man and lifelong resident of the San Gabriel Valley who serves on the Upper San Gabriel Valley Municipal Water District Board. He reported surpassing his goal of raising $150,000 in the first half of 2015 for his bid to succeed Hernández, who is termed out next year.

“Our campaign will be reporting close to $165K raised for the first quarter, and as of today we have over $170K raised! This shows how strong our campaign is and that we are in it to win it!” wrote Urias on his Facebook page July 13.

Also in the race is Blanca E. Rubio, who is seeking re-election this November to her seat on the Baldwin Park Unified School District board. As of September, she had raised $181,612 this year for her Assembly bid, which was endorsed in June by the California Latino Legislative Caucus.

Atkins told reporters that Block had agreed to give up his seat after one term so she could run. Block has countered that, although they discussed such an arrangement, he never agreed to do step down.

Running to succeed Atkins in the Assembly is gay San Diego City Councilman Todd Gloria. He has been endorsed by Atkins, the California Latino Legislative Caucus, and the statewide LGBT advocacy group Equality California.

“Todd has said his mission is to leave things better than he found them,” stated EQCA Executive Director Rick Zbur. “He has certainly achieved that during his time on the city council, where he helped ease homelessness, create affordable housing, and made San Diego a better place to live for LGBT people and all its residents.”

Also expected to seek the seat come June, when the top-two vote getters will advance to the November election, is Republican Kevin Melton, who ran for the seat last year but failed to advance past the primary. The two Democrats who had been running, lifeguard Ed Harris and Sarah Booth, whom Atkins had initially endorsed, dropped out of the race and endorsed Gloria when he announced.

Gloria, who in 2013 served as his city’s interim mayor for six months due to the resignation of former mayor Bob Filner, is expected to easily win the seat next November.

“I am humbled and grateful to all of those who supported us right off the bat. It means a great deal to me and I cannot thank you enough for making this a great experience thus far,” wrote Gloria in an email July 20 to his supporters.

The other gay lawmaker termed out next year is Assemblyman Rich Gordon (D-Menlo Park), who is eying a run for state Senate in 2020. It is unlikely an LGBT candidate will seek Gordon’s 24th Assembly District seat; Gordon has already endorsed Palo Alto City Councilman Marc Berman, who is straight, in the race.

Matthew S. Bajko is an assistant news editor and the political columnist at the Bay Area Reporterin San Francisco.