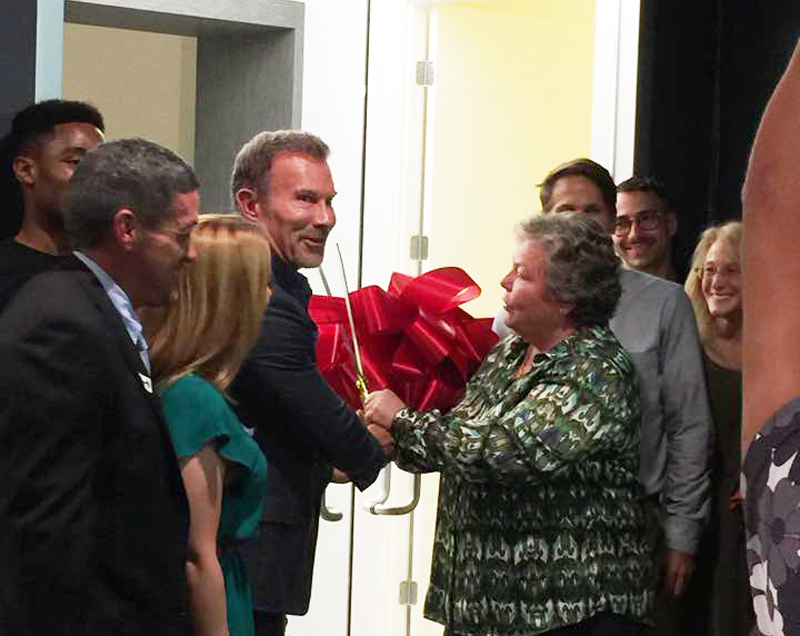 Lorri Jean, CEO of the Los Angeles LGBT Center has embarked on an ambitious expansion and says she is now busy raising $80 million dollars to develop a new project adjacent to The Village at Ed Gould Plaza.

The Los Angeles LGBT Center-WeHo is funded in part by the City of West Hollywood, L.A. County Division of HIV and STD Programs, California State Office of AIDS, the U.S. Centers for Disease Control and Prevention, AIDS/LifeCycle participants and contributions from other Center supporters. Architectural design services were provided pro bono by Center board member Michael Mueller.

“At the new Los Angeles LGBT Center-WeHo, we’re offering the services and support that are essential to protecting the sexual health of our community,” said Jean, “and we’re providing them in a welcoming, sex-positive environment where everyone will feel comfortable talking to our providers and counselors about their risk factors, their interest in going on PrEP, STD symptoms they may be experiencing, and more.”

The ultra modern space was designed by Center board member Michael Mueller and features an outstanding collection of artworks by major artists. The facility is 2,600-square-feet and far larger than the Center’s WeHo based HIV/STD testing and STD treatment unit. The WeHo Center aims to offer 15,000 HIV/STD tests per year with those who test positive for HIV being an immediate high level of care. Those who test positive for STD’s will be treated onsite.

“If everyone who is HIV-positive could get treatment and reduce their viral load to an undetectable level, HIV could be stopped,” said the Center’s Director of Sexual Health Services, Dustin Kerrone, “but first they have to know they’re positive. Today, one out of seven people who are HIV-positive don’t know it. By increasing our testing capacity, by offering fast and convenient testing in a sex-positive environment, and by making it easy to obtain PrEP and PEP, we hope to help slow the spread of HIV in L.A. where 83% of those living with HIV are gay or bisexual men.”

The Center has launched a marketing campaign they hope will go social. “What R U Into?” is designed to help promote the new Center’s focus on sexual health by featuring people in locations throughout West Hollywood locations displaying their favorite “What R U Into” emoji.

The campaign’s simple message reads: “Whatever you’re into, caring for your sexual health is our priority at the new Los Angeles LGBT Center-WeHo.” The campaign will run in print, online, mobile and outdoor media supported by the website whatRUinto.org.

TheLos Angeles LGBT Center-WeHo hours will be Monday through Friday, 11 a.m. to  2:30 p.m. and 4 to 7 p.m. Testing services are available on a walk-in basis or appointments can be made by calling 323-860-5855. Additional information is available at lalgbtcenter.org/WeHo.