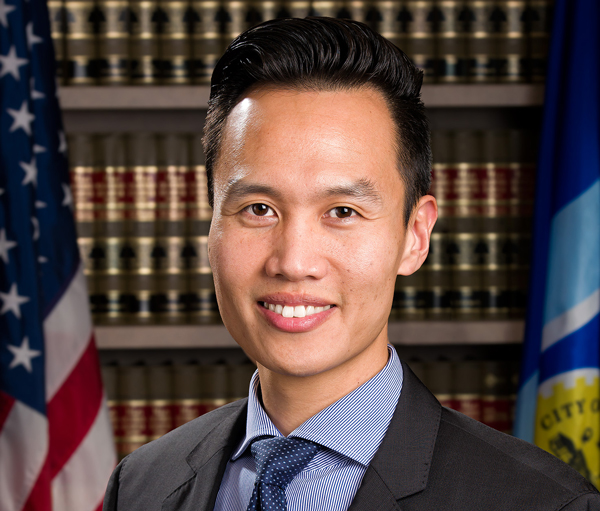 Nguyen, 35, who came out publicly in July, had suggested this summer that he would seek the 46th Congressional District seat in Orange County. The current officeholder, Congresswoman Loretta Sanchez (D-Garden Grove), is running for U.S. Senator Barbara Boxer’s seat.

Nguyen made it official October 13 when he announced he had formed a campaign committee and launched his website for the race.

“I’m excited to announce that I will be running for Congress in the place I have always called home. I can’t wait to take my passion, and the passions of so many others around me, to bring reform to Washington, D.C,” stated Nguyen in the news release announcing his candidacy.

He is one of four out candidates to run for Congress in California. Anaheim City Councilman Jordan Brandman, who is also seeking Sanchez’s congressional seat, came out Wednesday, October 15, in an interview with TheLiberalOC website.

“I felt it was time to tell those closest to me. The support of my family and friends has been overwhelmingly positive and I feel free to be wholly me,” Brandman, 35, told the site.

In a story posted Monday, October 19 by the Orange County Register, Brandman said he decided to talk openly about being gay now that he has been with his boyfriend for six weeks.

“I’ve found personal happiness in my life, and now is the time to share it with my family and friends,” Brandman told the paper. “It’s an entirely personal decision to make this announcement, based upon the circumstances in my life.”

Congressman Mark Takano (D-Riverside), who is Japanese-American, is seeking a third two-year term next November in his 41st Congressional District seat. His election in 2012 marked the first time an out person won a seat in Congress from the Golden State and the first time an LGBT person of color served in Congress.

Nguyen would be the first out immigrant to serve in Congress. Born in a Thailand refugee camp, where his parents and several of his six siblings had sought refuge after escaping Vietnam, Nguyen came to the U.S. three months later and grew up in southern California. He became a U.S. citizen at the age of 12.

A Democrat, elected mayor last November, Nguyen spoke openly for the first time about being gay at a July forum with Ted Osius , who is also gay and the U.S. ambassador to Vietnam.

In a phone interview October 16 with the Bay Area Reporter, Nguyen said he has received wide community support since coming out of the closet. He plans to seek the endorsement of both the Gay and Lesbian Victory Fund and Equality California’s political action committee.

He said he wasn’t surprised by the positive reaction, considering the political makeup of the congressional district, which includes the cities of Santa Ana, Anaheim, and parts of Garden Grove and Orange.

“This is a solidly Democratic district based on the numbers,” said Nguyen, who is an organizer for the American Federation of State, County and Municipal Employees union. “I am not sure if it’s new people moving in or not. But if you look at the numbers, it has been changing more and more Democratic.”

Nguyen speaks English, Spanish, and Vietnamese and is Garden Grove’s first Vietnamese American mayor. Prior to his election, he served, by appointment in 2011, then by election in 2012, as trustee of the Garden Grove Unified School District Board of Education, including a term as vice president.

Nguyen said he decided to run for Congress because many of the issues he cares about, such as immigration reform and education, are impacted by the policies coming out of Washington, D.C. He supports a pathway to citizenship for undocumented immigrants and would push to reduce the cost of college should he be elected.

“A lot of what happens locally is tied to decisions made in Congress. I want to have a positive impact for my community and want to be the representative for this district I call home,” he said.

To date no Republican has announced plans to seek the seat. Three other Democrats are in the race: former state Senators Lou Correa and Joe Dunn, and Pomona resident Heberto Sanchez , a manager with the Los Angeles County Department of Health.

Correa has been aggressively courting donors and supporters, reporting he had raised $179,681 as of September 30 with more than $151,000 in his campaign account. He has lined up endorsements from Congresswoman Linda Sanchez (D-Whittier), the sister of Loretta Sanchez, as well as Congressmen Juan Vargas (D-San Diego), Alan Lowenthal (D-Long Beach), Pete Aguilar (D-Redlands), and Ted Lieu (D-Los Angeles).

A day after Nguyen announced his bid for the seat, Correa’s campaign announced gay state Senator Mark Leno (D-San Francisco) had endorsed his candidacy. In the release, which called Leno an “LGBT trailblazer and longtime advocate for equality,” the Bay Area lawmaker was quoted as saying, “The voters of the 46th Congressional District would be fortunate to have Lou Correa fighting for them in our Capitol. Lou’s rare intellect, work ethic, determination and compassion will serve his constituents well. We need Lou’s leadership in Washington.”

While Dunn has yet to report any fundraising, the committee Friends of Joe Dunn for Congress has raised $131,274 to date and reported having $129,777 in the bank.

As the Orange County Register noted in a recent story about the race, the ethnic makeup of the district’s voters favor Correa and Dunn. Latinos account for 42 percent of citizens of voting age in the district, the paper pointed out, while non-Latino whites account for 41 percent.

Asked about the demographics, Nguyen said he has either lived or worked in every city in the district and is not running to represent just one community.

“I am not just reaching out to Vietnamese voters. I am running to represent this entire district,” he said. “I am going to work very hard to earn the trust of the voters in this district regardless of what their racial or ethnic makeup is.”

There is still the chance that Sanchez could opt to seek re-election to her House seat instead of Boxer’s Senate seat. She has until the March 11 filing deadline to decide which race to compete in; as of last week she was trailing state Attorney General Kamala Harris in both polling and fundraising.

But Sanchez was well ahead of the Republicans in the race: Assemblyman Rocky J. Chavez of Oceanside and former state Republican Party chairmen George “Duf” Sundheim and Tom Del Beccaro . Under the state’s top-two primary system, the two candidates with the most votes in the June 2016 primary will advance to the November election, so at this point it is likely it would be Harris and Sanchez.

Nguyen said he couldn’t answer when asked if he knew whether Sanchez would run for the Senate or House next year. Nor would he say if he would drop out of the House race if she sought re-election to her congressional seat.

“I am not going to speculate on Sanchez and if she would run for re-election,” he said.

Nguyen did say he is planning to fundraise throughout California for his race and welcomed anyone interested in serving on a host committee emailing his campaign manager, Soham Pandit, at soham@bao2016.com.

“I think people in this district need reform in Washington. They need a government to listen and put their interest ahead of big corporations,” he said. “I want people to have a government that is on their side. I want to reform how our government works and put it back on the side of the people.”