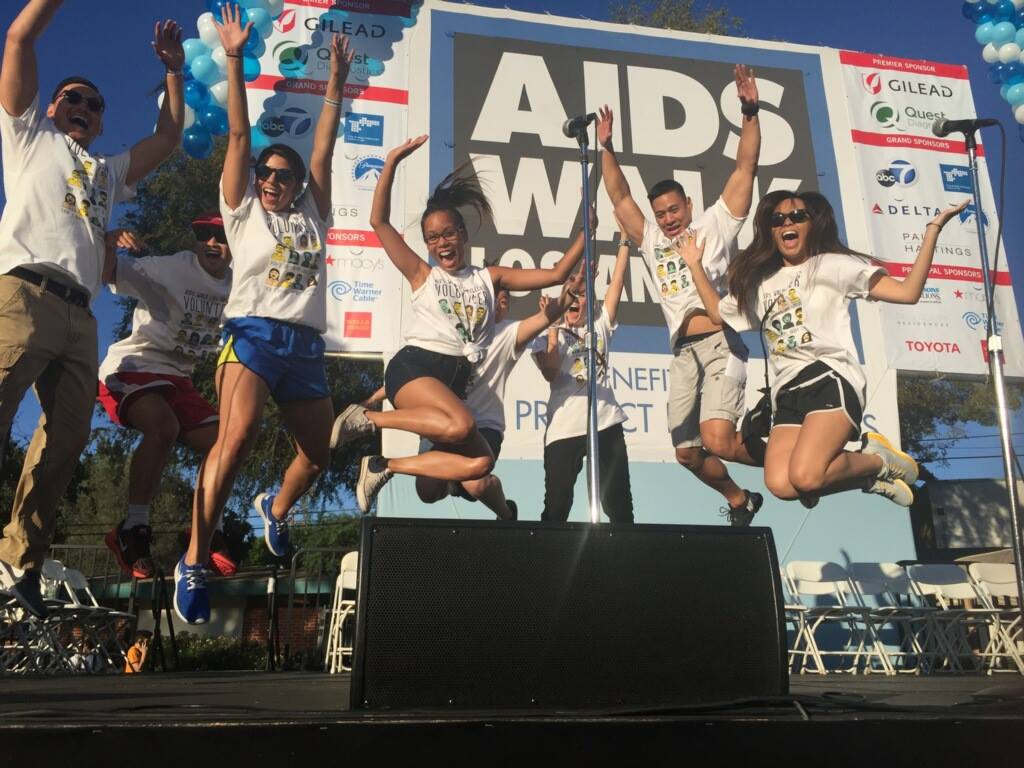 BY TROY MASTERS  |  West Hollywood turned it out for the 31st annual AIDS Walk and every corner of Los Angeles, it seemed, showed up for the 6.2 mile walk.  The shirtless muscle boys of WeHo were there in full force (of course they were shirtless, it’s 100 degrees!) but so was just about every corporate group in Los Angeles.  Sony Pictures, Verizon, Time-Warner, Fox, every major studio, bank, hotel, etc., even mom and mom businesses and mom and pop shops, businesses and organizations of every size sent a contingent.  There were buses of school kids and church groups from at least as far away as Malibu, full of people sponsored by someone to walk in support of AIDS Project Los Angeles’ work.

AIDS Walk 2015 kicked off at 10 a.m. at West Hollywood Park and journeyed along Santa Monica Boulevard to the Fairfax district.

Before the event began this morning it had already raised more than $2 million, putting it on course to match last year’s $2.9 million take. Since the event began in 1984 it has raised nearly $80 million.  AIDS Project LA uses the money to fund HIV support services in the area.

For many participants today the event is a way of memorializing a loved one.  “In 1994, I was 9 years old when my dad was diagnosed with AIDS. That same year he passed away at the age of 50. It changed our family forever. I’ll be walking this year’s AIDS Walk LA in his memory and to show my love and support for every family affected by this disease. Walk, donate, volunteer, support in any way you can,” said Yeshe Benedict, one of 2015’s Star Walker of the Day.

Thousands of other people throughout the area raised money, small amounts and large, in memory of their loved ones.

Some came to AIDS Walk for solace.

Luisa Nuñes, from Tijuana, Mexico, who asked not to be photographed, traveled to West Hollywood from Pomona to remember her brother, Rodrigo, who died last year when he developed a variety of HIV related conditions. She said Rodrigo, who was usually homeless, could not manage his own healthcare very well because he suffered from schizophrenia.  “Our family wanted to help Rigo but we did not know how to manage all he faced. All we could do really is ask him to take his medications.”

Los Angeles  County Health Services says that more than 50,000 residents live with HIV and that 1500 people were reported newly infected in 2014. More than 40 percent of new infections occur among Latino males, many of whom, because of immigration restriction on healthcare access are unable to access affordable treatment.

HIV’s impact is on Latino population in the United States is disproportionate to all other population groups.  While Latinos represent 17% of the U.S. population the CDC estimates that by 2013 they accounted for 21% of all new diagnoses. In previous years that number was lower.  The majority of newly infected Latinos — if they are diagnosed at all — are unable to access HIV medical care.