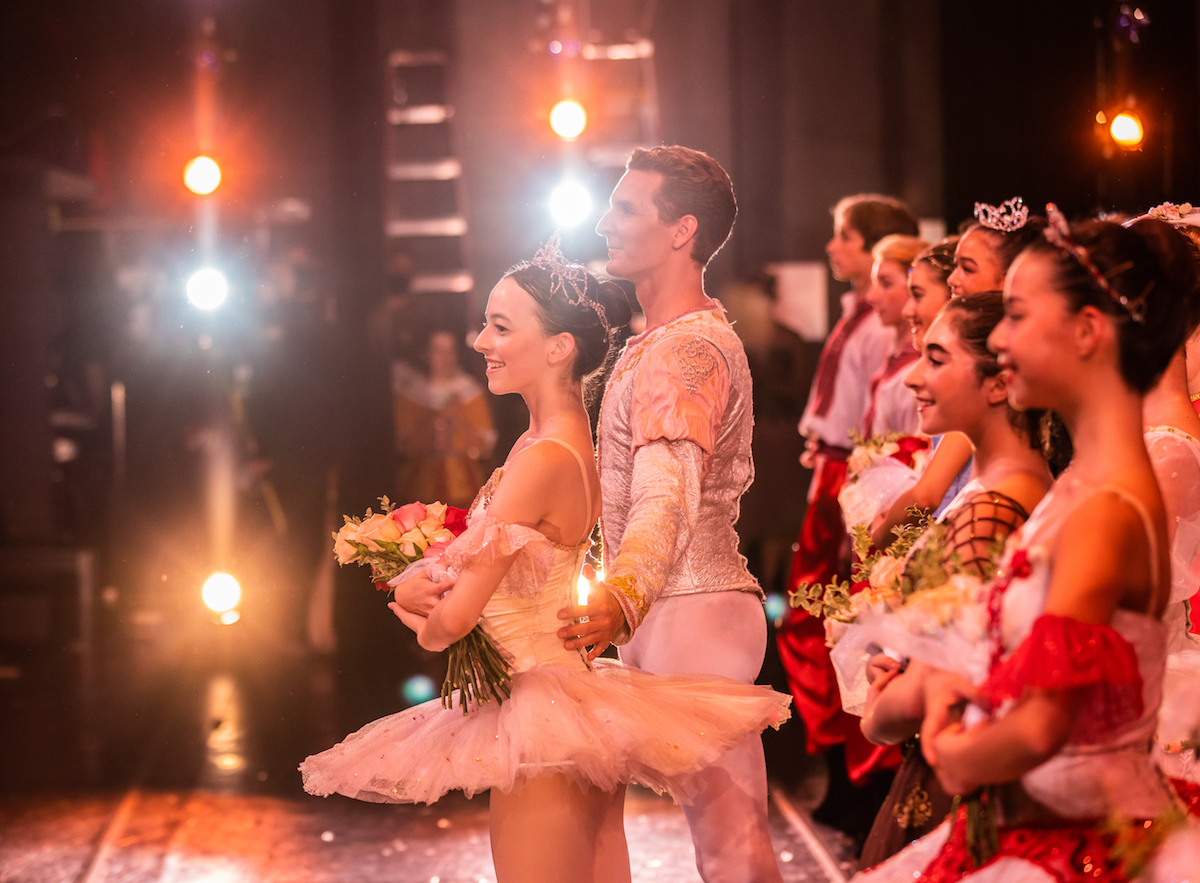 The longest-running NUTCRACKER production in SoCal returned for a 10 day run Nov. 26 – Dec. 4  to The Eli & Edythe Broad Stage in Santa Monica. The second weekend was completely sold out for Westside Ballet of Santa Monica’s 9th year running at the Santa Monica College Performing Arts Center.

The cast of over 85 student dancers included three professional guest artists who shared the stage in the nonprofit performance company’s 49th Nutcracker Season. Students travel to Santa Monica all the way from Oxnard and Calabasas in the North—and Hollywood Hills, Beverly Hills and Mid City in the East—many times a week, for classes and rehearsals.

An avid ballet aficionado, Pat Margulies, posted a Facebook review echoing many audience goers reactions: “I have seen Nutcracker productions EVERYWHERE and FOREVER … THIS Broad Theater / Westside Ballet of Santa Monica WAS THE BEST PERFORMANCE I have ever seen! It was a traditional story with the most exquisite dancing and beautiful feelings from the cast. THANK YOU SO VERY MUCH!!!! I cried several times! That’s how good and perfect it all was. Again, thank you.”

Additionally, Sawyer and Dylan each performed as the lead Sugar Plum Cavalier in the “Nutcracker Suite,” which Westside performs for 1,000 elementary school students in the Santa Monica-Malibu and Los Angeles Unified School districts. The ballet was narrated to ballet excerpts, followed by Q&A with the dancers. Performances were at 11 am Wednesday Nov. 30 and Friday Dec. 2.

Evan Hull joined Dylan in performing the iconic Toy Soldier. Sawyer and Dylan also brought their prowess to the Battle scene in the Nutcracker and Mouse King’s duel. Sawyer and Dylan are sophomores at SaMoHi. New to the company, Evan travels all the way from Porter Ranch nearly every day for rehearsals and classes.

Another reviewer wrote on Square, “Spectacular!!! The dancers were all professional and never missed timing. I am so moved and want to see more. They were dancing lightly, it was Ike, a group of Angels moving to great music. I hope to hear more about the programs and dates. Everyone was exceptional and a star!!! BRAVO”

The Los Angeles community has been celebrating the holidays with Westside Ballet’s rendition of the classic since 1973. Yvonne Mounsey, co-founder of Westside, or the role of Center Spanish at New York City Ballet. This was the full, classical ballet based on the story of “The Nutcracker and the Mouse King” by E.T.A. Hoffmann and the Marius Petipa version.

The Westside production featured 225 costumes and four elaborately designed scenes, all of which had been updated with new backdrops and accouterments over the years while retaining the most beloved traditional characters and iconic moments, such as a growing Christmas tree, a firing cannon, and snow falling over a stunning corps de ballet.

Szentes performed the lead role of the Sugar Plum Fairy’s Cavalier. Szentes started training at age 6 and attended the Hungarian Dance Academy as well as North Carolina Dance. After finishing college, he spent three years dancing both corps de ballet and soloist roles with the Hungarian National Ballet. He moved to California in 2012 to dance with the Sacramento Ballet. He is a regular principal dancer with American Contemporary Ballet, Ballet Project OC, and Raiford Rogers Modern Ballet.

Evan Swenson, who has been a resident guest artist at Westside Ballet for the past decade, performed the lead role of the Cavalier for the Snow Queen and the Arabian pas de deux. Mr. Swenson, a native of central California, was granted a full scholarship to attend the Houston Ballet Academy when he was just 17 years old. Before relocating to New York in 2007, he was a soloist and principal dancer with Atlanta Ballet.

Swenson alternated with Jack Virga Hall, the third guest principal, the Arabian pas de deux. Mr. Hall is a Los Angeles-based dance instructor who is also certified by the American Ballet Theatre. He is currently on tour with the modern company at Lula Washington Dance Theatre, the contemporary company at Pony Box Dance Theatre, and the classical ballet all-male pointe company at Ballet D’ Hommes.

Nutcracker Dancers Receive College Credit for Performing
Under an education initiative launched in 2013, Westside’s dancers who are high school students concurrently enrolled in Santa Monica College dance course 59A will receive credit for the performances. The credits are transferable to any of California’s public four-year colleges and universities.

About Westside Ballet of Santa Monica – One of the nation’s premier pre-professional ballet training companies, the nonprofit organization’s mission is to give promising young dancers the performance opportunities so important to their development––as well as make dance more accessible to local children and families. Westside Ballet of Santa Monica was created by Yvonne Mounsey (New York City Ballet) and Rosemary Valaire (Royal Ballet) in 1973. Westside Alumna Martine Harley (Houston Ballet) took over as Artistic Director in 2013. Based in Santa Monica, California, the company comprises approximately 80 dancers, ages 8 to 18.

The sister entity, Westside School of Ballet, distinguishes itself as a non-audition academy where all are welcome to study ballet and train to the most refined pre-professional level. Nearly all the artistic staff are products of the school, bringing a consistent approach to classical ballet training. Ms. Mounsey and Ms. Valaire opened the school in 1967, six years before the founding of the performance company, and produced many of classical ballet’s luminary performers known worldwide.