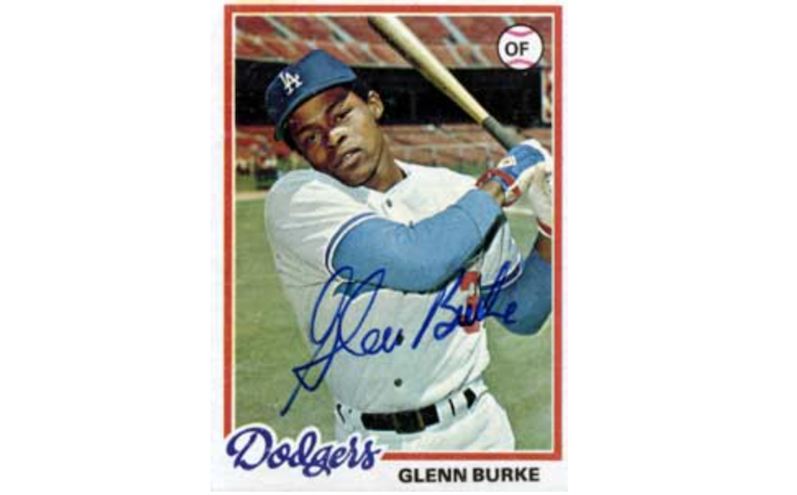 Lutha Burke Davis, Burke’s oldest surviving sister and the family matriarch, told the New York Times how her brother would have reacted.

“Glenn probably would have said, ‘Dang, about time!’” Davis said. “He’d be grinning from ear to ear. He would be thrilled that he was thought about that much, really.”

More than 40 members of Burke’s family attended the pregame ceremony to recognize Burke, who played four seasons total from 1976-79, before being driven out of town, according to the New York Times.

Although his time in Los Angeles was brief, Burke’s imprint is lasting. During the ceremony, his former teammates described him as a player who could beat you on the baseball field and school you on the basketball court.

“People talk about the high-five,” said Dusty Baker, Burke’s partner in what is credited to be the celebratory slap’s invention on Oct. 2, 1977. “Glenn started that. All I did was reciprocate to it.”

But Burke was far ahead of his times before the times would recognize him, according to the New York Times: He was traded by the Dodgers, shunned by the Oakland Athletics and, eventually, ostracized from baseball. He wound up lost, alone and alienated. He was briefly homeless and turned to cocaine and crack. He did a short stint in prison for drug possession.
Near the end of his life, he contracted H.I.V. and died from AIDS complications at 42 in May 1995, the New York Times reported.

For many people, the story would have ended there, but the Dodgers’ kept his legacy going, according to the New York Times.

“The most unique human being, the most dynamic person, that I’ve ever met,” said Larry Corrigan, a minor league teammate of Burke’s (1973 to 1976) before working more than three decades as a scout and executive, mostly for Minnesota. “He was built like a god. He was funny, witty and semi-loud if he knew you. But he could be quiet, too.”

Seven months after his debut with the Dodgers in 1976, Burke was traded in mid-May for Bill North to Oakland.

In 1977 after the World Series, the Dodgers’ general manager Al Campanis offered Burke a bribe. If he were to get married, he would pay for an expensive — $75,000 — honeymoon, according to the New York Times.

When Burke told his family how he responded to Campanis’ offer, “that struck us as funny,” Davis joked to the New York Times, since her brother grew up in “a house full of girls.”

If Burke lived in today’s world, with Billy Bean as Major League Baseball’s senior vice president for diversity, equity and inclusion, perhaps he would have had a chance. Bean, also a former Dodgers outfielder, was the second — and still the only other — ex-big-leaguer to come out as gay, according to the New York Times. Today, Bean has developed a close relationship with the Burke family.

Burke came out as gay to a few teammates in the 1970s but did not come out publicly until after his career ended, according to the New York Times.