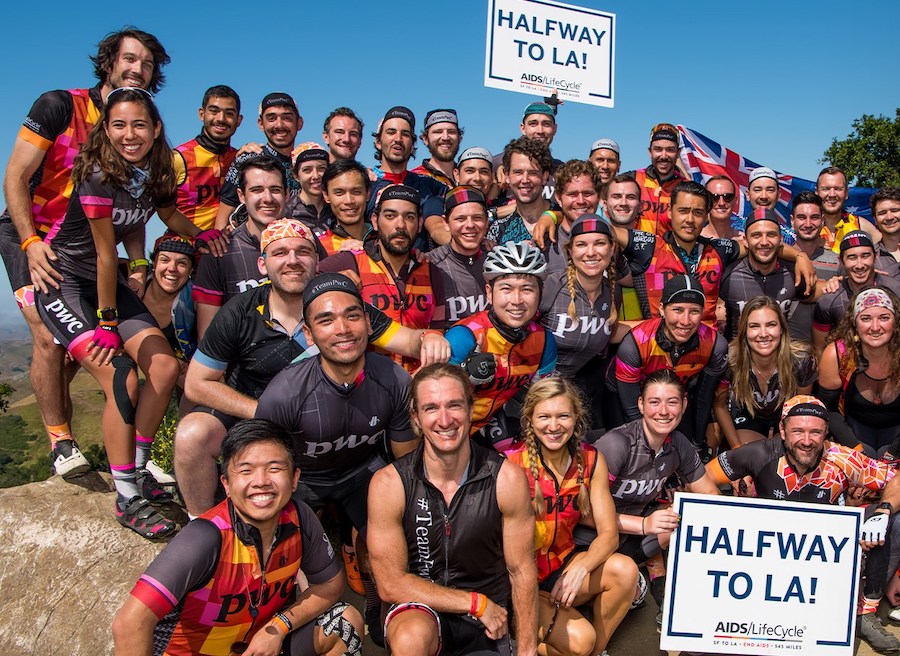 Itching to do the ride again with her wife Barb Schultheis, they began training in January 2021 for the next ride, but it was canceled due to the pandemic.

“I originally did the ride because my uncle died of AIDS in the 1980s and I rode in his honor,” Esquivel shared at the February AIDS/LifeCycle SoCal Expo in Griffith Park, reported by LGBT News Now. “I’ve been wanting to do it again.”

Luckily, the pandemic didn’t stop them from training.

Both 2020 and 2021 in-person rides were canceled, but the world’s largest single event fundraising for HIV/AIDS will make a return from June 5-11 starting in San Francisco and into Los Angeles.

“I’m excited about it,” Schultheis told LGBT News Now. “It’s been on her (Esquivol) bucket list to do it again so I’m doing it with her. The training is going really well and we’re feeling strong.”

At the SoCal Expo, Esquivol and Schultheis met more than a dozen community partners, perused the latest gear and equipment, and learned about best practices and tips to prepare for the seven-day ride.

After the morning training ride, a volunteer massage team was on hand to help riders recover, and giveaways, a free gear swap, merchandise sales, food and drink and vendors brought back memories of previous fundraiser rides.

“Seeing the massage tables and the Camp Lounge is bringing it all back and I can’t wait,” 2019 rider Russell Lin told LGBT News Now. “I’m already a cyclist and I wanted to do something where I’m giving back to the community. After doing the first one, I just fell in love and now I’m here again.”

Lin said people are more eager than ever to support the fundraiser.

“I’ve been posting on social media and people have been donating including some people who I don’t even know,” Lin shared. “It’s pretty amazing to have people donate once they see what I’m doing.”

In 2019, participants raised more than $16.9 million, the highest amount in the event’s long history. This year, riders are on track to surpass that total.

So far, $6 million has been raised for the 2022 ride which is $2 million more than expected for February, according to Tracy Evans, ride director.

“People are just so eager and happy to be back with the community and when we opened registration in August, they were all in and they just got to it which is why we are where we are with fundraising,” she said.

A limited number of slots are still open for anyone considering the trek, but they are expected to fill quickly, Evans mentioned.

“While we’ve come so far in the last 40 years in our mission to end AIDS, we’re not there yet and it’s going to take more to get there,” she said. “Join in and be part of the solution.”
To register or volunteer for the ride, go to aidslifecycle.org.