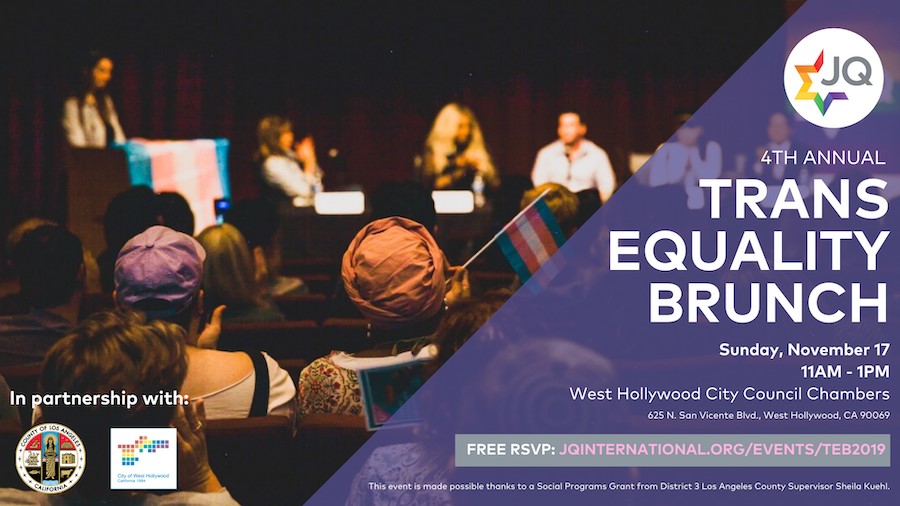 In part of recognition of Transgender Awareness Month, the City of West Hollywood is co-sponsoring the JQ International Trans Equality Brunch.

This fourth annual event takes place Sunday, Nov. 17 from 11 a.m. to 1 p.m. and will feature a timely and important discussion with members of the transgender and genderqueer community.  The panel discussion consists of community members sharing their voices, stories and experiences as diverse and accomplished transgender and genderqueer folks. The event is designed to ultimately build stronger friends, allies, and supporters of full equality for the entire LGBTQ community, according to a press release.

Transgender Day of Remembrance, which occurs annually on November 20th, is a day to memorialize those who have been murdered as a result of transphobia and to bring attention to the continued violence endured by the transgender community.

“Transgender Day of Remembrance seeks to highlight the losses we face due to anti-transgender bigotry and violence,” Transgender Day of Remembrance founder Gwendolyn Ann Smith once said. “I am no stranger to the need to fight for our rights, and the right to simply exist is first and foremost. With so many seeking to erase transgender people — sometimes in the most brutal ways possible — it is vitally important that those we lose are remembered, and that we continue to fight for justice.”

As part of its support of the transgender community, the City of West Hollywood has a Transgender Resource Guide available on the City’s website, which provides information about a variety of resources including legal, health, and social services, available in the Greater Los Angeles area to enhance and improve the well-being of transgender people.

For more information about JQ International’s Trans Equality Brunch, please contact JQ International at (323) 417-2627, extension 5. Attendance is free with RSVP at https://jqinternational.org/events/TEB2019/. Limited parking will be available at the adjacent West Hollywood Park five-story public parking structure, located at 625 N. San Vicente Boulevard. This community-wide panel event is made possible by a Social Programs Grant from District 3 Supervisor Sheila Kuehl and is co-sponsored by the City of West Hollywood.