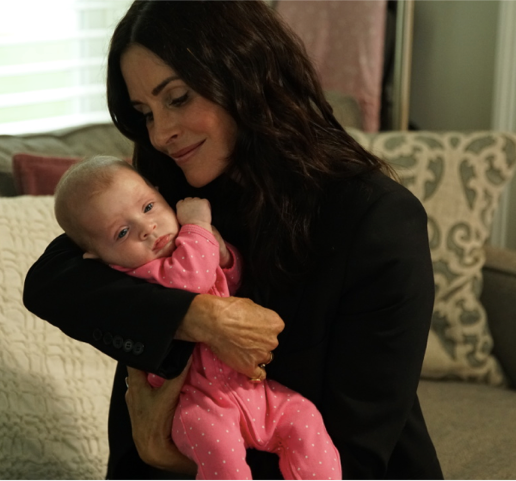 9 Months with Courteney Cox takes an intimate approach, giving viewers raw access to people from all over America of various race, religion, and class as they self-document their 9-month journey of pregnancy. Featuring a range of stories from a cancer-stricken mother to pregnant teenagers considering adoption to a 50-year old woman struggling to conceive and more, 9 Months with Courteney Cox, is a 20-part documentary series produced by AMPLE Entertainment and airs twice a week with episodes on Tuesdays and Wednesdays on Facebook Watch at Facebook.com/9MonthsWithCourteneyCox.

The Pride LA sat down with John Henshaw, showrunner and executive producer for AMPLE Entertainment to get more insight into this groundbreaking show.

The Pride LA: Why are you drawn to material that has LBGT themes?

John Henshaw: As a storyteller and producer, I am always drawn to stories of people who are on a journey. By nature, LGBTQ people have often faced struggle or challenges to achieve their personal happiness. As a member of the LGBTQ community myself, I have a rare platform to tell our stories and show the world that we face the same challenges, struggles and emotions as everyone else.

Are gay producers under-represented in the business?

I have been doing this for nearly two decades, both in the UK and here in USA. Within that time, I have definitely seen a progression in the industry with representation both in front and behind the camera. The business is reflective of the advancements and progress we have made within the LGBTQ community.

When you set out to produce the show, what was the driving force in terms of casting the 15 couples? How did you end up with LGBT couples?

Our intention was to represent a cross-section of America. We searched the country looking for people of different backgrounds with interesting stories to tell. We always wanted to show that despite people’s differences, they can have so much in common. We knew we wanted to tell some LGBTQ stories, but tell them in a way that hasn’t necessarily been seen before. We wanted to show just how much we have progressed as a society and how LGBTQ people now have the wonderful opportunity to have children and create families.  But we also wanted to challenge people’s perceptions of what a family can be. It doesn’t matter where you come from or who you are, at the core of a family is always love.

Three couples out of the main eight are LGBT. That’s a huge percentage. Tell us about each couple and why they were featured on the show.

We have such an amazing cast. I am so proud of all of them. I have been so lucky to get to know them all so well over the past year and I am grateful for their honesty and openness.

Adam and Jason are a married couple from Massachusetts, who’s best friend, Jessie, agreed to be surrogate for them a second time.  She soon found out she was pregnant with triplets! They now have four babies under the age of two!

Brandi and Lawrence are best friends who are both gay and decided to have a baby together. It’s been fantastic to see their growth from friends to a beautiful, happy little family.

Marnie and Rebecca are two of my favorite people on the planet. Marnie is non-binary and is currently pregnant with their baby girl that they conceived through reciprocal IVF. They have taught me so much about being non-binary and the challenges they face. I hope they have educated our audience and shown just how wonderful it can be to be unique and different.  Their daughter is going to be the luckiest girl in the world to have them as parents.

How does Courteney’s involvement raise the bar for the show?

Courteney has been such a joy to work with. She is so passionate and dedicated to everything she does. She is so invested in the families and the stories we are telling. She’s also been incredible with using her platform to bring attention to our show, which really brought people who might not have ordinarily watched it.

Why is Facebook the perfect platform for this series?

Facebook has been great. Not only do they have such a wide reach, they have an incredible community that really elevates the show to an interactive experience. It’s fantastic to see the cast and viewers talk to one another.

What do you want audiences to take away after watching the series?

Hopefully people can relate to the stories we are telling and see that we are all just the same deep down. All just going through life’s challenges and dealing with them the best way we can.

Why was a diverse cast important for this series?

We wanted to have a cast that was as diverse as America. We hoped that anyone watching would be able to find at least one story that they could personally connect to.

How did you collect all the home footage and decide on what to cut and what to keep?

We gave our cast multiple cameras for the series and collected hours and hours of footage over many months. We took the footage from each section of their Nine Months journey and found ways to condense it into the most compelling segments possible. I also have the most talented, passionate and hardworking team of producers and editors out there.

How long did 9 Months take to produce?

I’d love to say 9 months! But actually it took nearly 18 months in total. It has been a mammoth task, but a fantastic and enjoyable experience for us all.