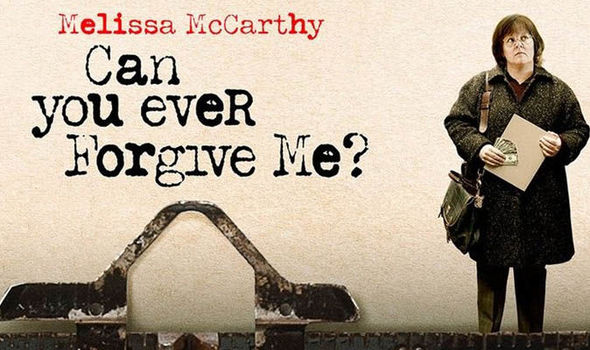 Melissa McCarthy is one of those rare actors whose instinct can unmask the face of comedy as the alter ego of tragedy.

Don’t go into this movie thinking you are going to see one of McCarthy’s hilarious slapstick romps. Settle in for a study in human nature. “Can You Ever Forgive Me?” is a sensitive, heartfelt portrait on film of an existence lived on the outer edge of society. The film is based on lesbian author Lee Israel’s memoir. McCarthy plays Israel, once a respected, best-selling biographer of celebrities, whose work has fallen out of popular favor. Unable to pay her rent and care for her beloved cat, she parlays her skills into the dark talent of forgery.

McCarthy’s portrait of Israel as a damaged woman doing her best to take control of her life with the talents she possesses is excellent. The players that surround her are portrayed in depth and detail, although the only truly close relationship she has is with her cat. Jane Curtin (Saturday Night Live, Third Rock from the Sun) is pitch perfect as Israel’s tough literary agent.

This movie plays like a blues song – in fact composer Nate Heller has artfully designed a sound track that is blues/jazzy. It contains all the angst of a character on the outside of humanity looking in as if through a dirty window. You may come away with questions about the soft line that exists between imitation and creativity.

Kathryn Whitney Boole has spent most of her life in the entertainment industry, which has been the backdrop for remarkable adventures with extraordinary people.  She is a Talent Manager with Studio Talent Group in Santa Monica. kboole@gmail.com.