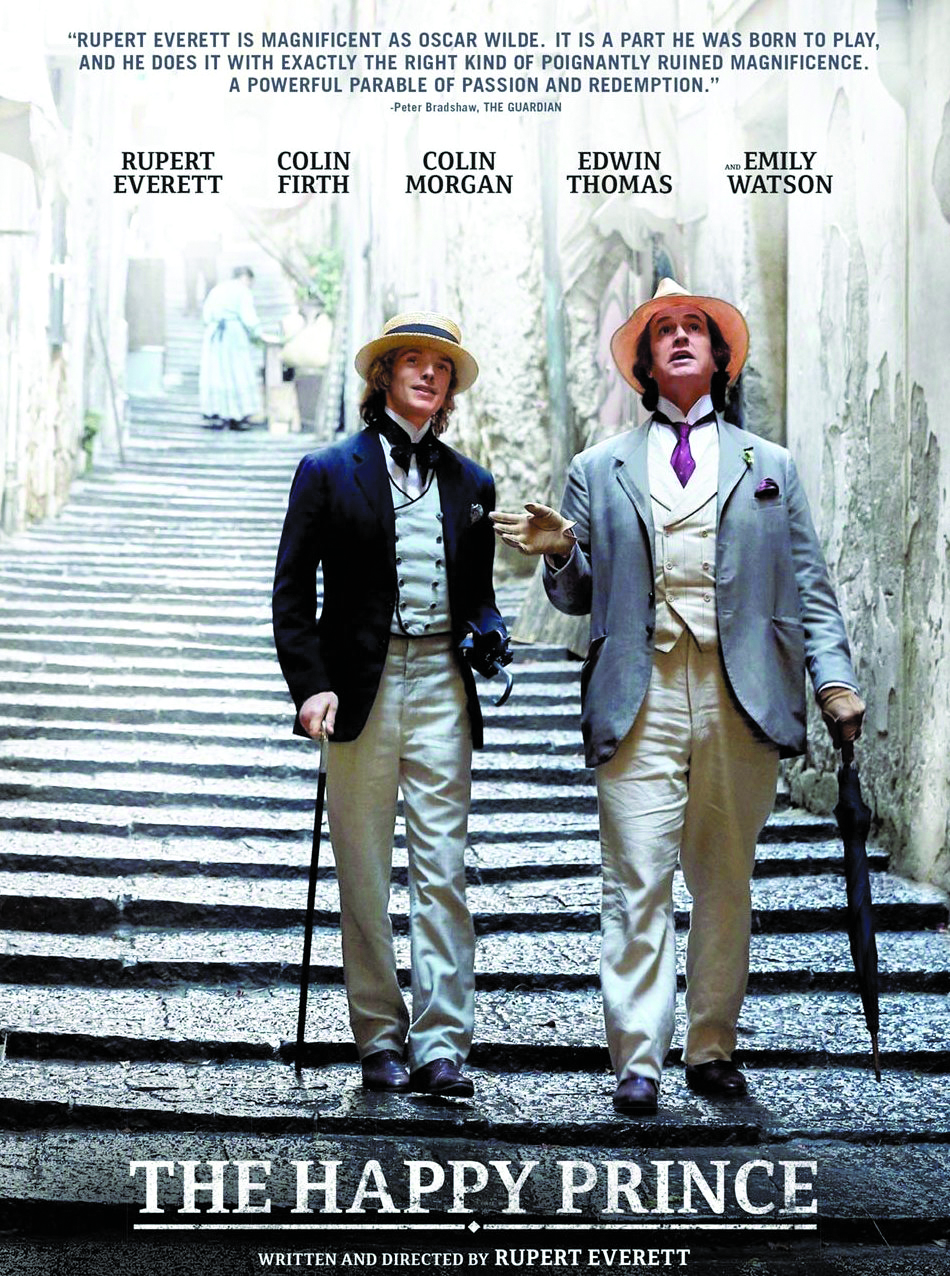 “The Happy Prince” may be the closest we will come to actually viewing the great Irish humorist and playwright Oscar Wilde on the screen. Rupert Everett wrote, directed and stars in this film about the eccentric, flamboyant figurehead. Everett has performed in many of Wilde’s plays over his long career. In a discussion following my screening, Everett explained that he had found early on that he had a natural ability to communicate in Wilde’s language, which has a unique and specific melodic flow. He has a deep understanding of this exceptionally complex man and his times.

Wilde was extremely intelligent and well read, educated at Oxford and fluent in French and German. He was a poet, novelist, ostentatious celebrity and playwright. He represented the artistic milieu of his time, the “Belle Epoque” of the late 1800s. Had Wilde lived today he most certainly would be a social media megastar. What set him apart from other artists of the time was his highly developed sense of humor – his ability to laugh at the world and himself.

Everett began work on “The Happy Prince” eleven years ago. It’s common for an independent, low budget film to take that long to come to fruition and in this case it was also fortuitous in that Everett’s frustration with the process drove him to take on the roles of both director and actor. He handpicked his cast, and thus they represent probably a very accurate version of Wilde’s closest friends. In Everett’s words, no one is a “minor player,” no matter how little screen time they have. Every character is crucial to telling the story of the last days of this great artist.

Though he died at age 46, Wilde lived such a rich and varied life that it is impossible to summarize his impact on art and culture within a few paragraphs. Everett, in choosing to cover just the end of Wilde’s life, gives us the fascinating “tip of the iceberg” and tempts us to want to know more about him.

Everett noted that today history is often pushed to the periphery of our daily existence. We remember what happened on twitter up to two hours ago – the rest is forgotten. This is sad as understanding history has such a great effect on the strength of our society. Wilde’s time was the nascence of what our world is today. During the height of his influence the strict social mores of the 19th Century were beginning to break down. Artists and writers such as Wilde were finding the courage to break barriers. Conditions were beginning to form that gave birth to two world wars during the next century. Wilde’s comedy is born from the tragedy of one existence coming to an end, and a new world rising from the ashes. The positive to take from this movie is that such films can give our society a start at reigniting the curiosity that we so need mine the depths of history and stories of illustrious figures that have carved out their lives before us.

Kathryn Whitney Boole has spent most of her life in the entertainment industry, which has been the backdrop for remarkable adventures with extraordinary people.  She is a Talent Manager with Studio Talent Group in Santa Monica. kboole@gmail.com