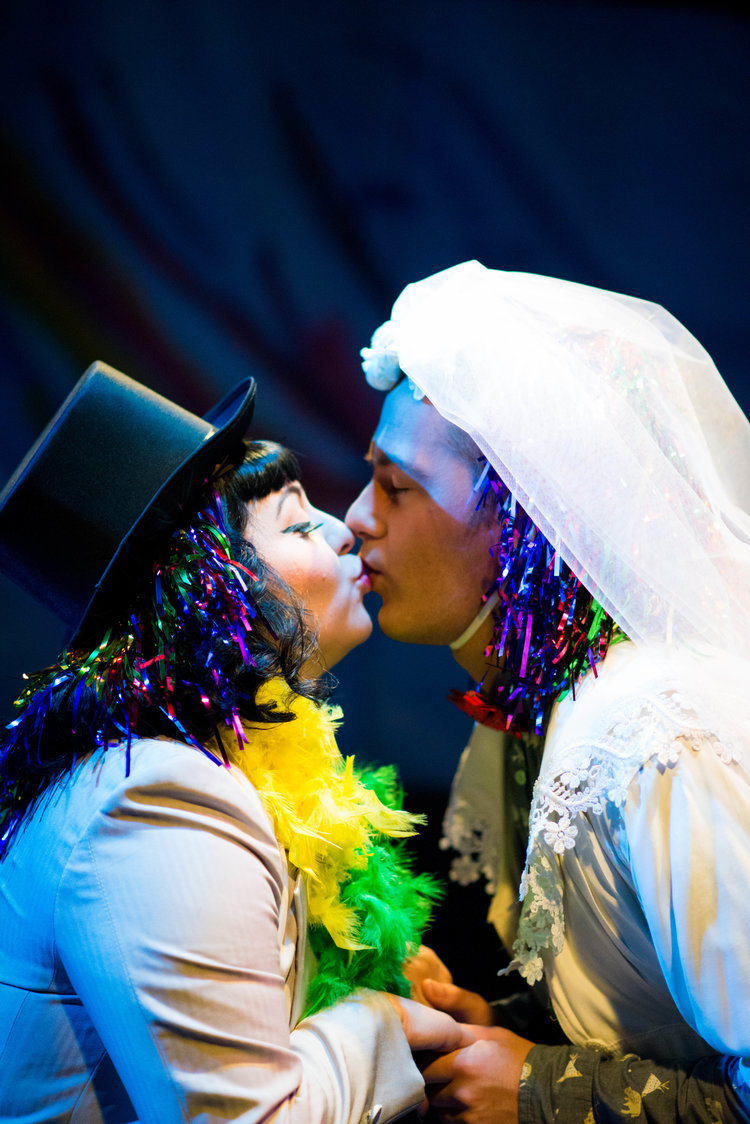 Being placed in a box can feel very constricting when you are, in fact, human-shaped rather than box-shaped. The Garage’s “The All-American Genderf*ck Cabaret,” by Mariah MacCarthy, celebrates breaking out of the constricting box of stereotypes we are often placed in as members of the LGBTQ+ community. The play – narrated by “engaging gender-bender, Taylor,” the Garage website describe them – revolves around the adventures and hurdles of eight characters navigating through their everyday lives. The audience follows the characters as they intersect with each other, facing “typecasts of how they perceive they should act, and how they truly choose to behave,” the website states.

The play dives right into the world of genderbending and questioning one’s identity when host/narrator Taylor suggests that, by the end of the day, everyone in the audience has broken gender presentation expectations in some shape or another. Taylor goes on to explain how simply existing in their own body is a gender identity challenge for others. Queer women look at Taylor, wondering if it makes them straight. Straight men look at Taylor, wondering if it makes them gay to have a crush on them. It is at this point Taylor points out audience members, making them squirm in their identity, much like the discomfort Taylor feels daily.

“Genderf*ck” tackles stereotypes without becoming one itself. The play points out the expectations and societal roles each character has, yet does not manipulate them into characatures of themselves. The sporty girl can feel soft and vulnerable, the straight man who everyone presumes gay can comfortably jam to Beyonce during his breakup because … well, Beyonce. Even the proverbial and literal Dick (that’s his name, I swear) has a sweet side, buying his little nephew a Pomeranian dog because, despite the weird genderization of pets, Dick wants to make his nephew happy.

The cast and characters are so diverse that it is easy for everyone to relate to some aspect of the play. Whether it be the strong, man-hating – yet questioning and growing – lesbian, or the man’s man, reads-the-signals-all-wrong, guilt-ridden antagonist, the characters and relationships they build with each other reflect similar values and interactions often encountered in the real world.

The play marries the real and the fantastical in a seamless effort that allows the audience to slip away from the struggles of real life for an evening. Not to give away all of the magic, but the play incorporates whimsical shadow puppetry, highlighting the diversity of the cast and crew’s artistic ability while provoking comic relief, or etherial trances. “Genderf*ck” also has an incredible bright and vibrant dance number that is reminiscent of Rocky Horror Picture Show’s “Time Warp,” pointing out the absurdity in life and relationships. In the end, everyone just wants to be wanted and accepted.

The Garage’s “Genderf*ck Cabaret”  is running now through Aug. 25 on Thursdays, Fridays and Saturdays at 8 p.m. For more information, visit http://www.thegaragetheatre.org/on-stage-now-1.