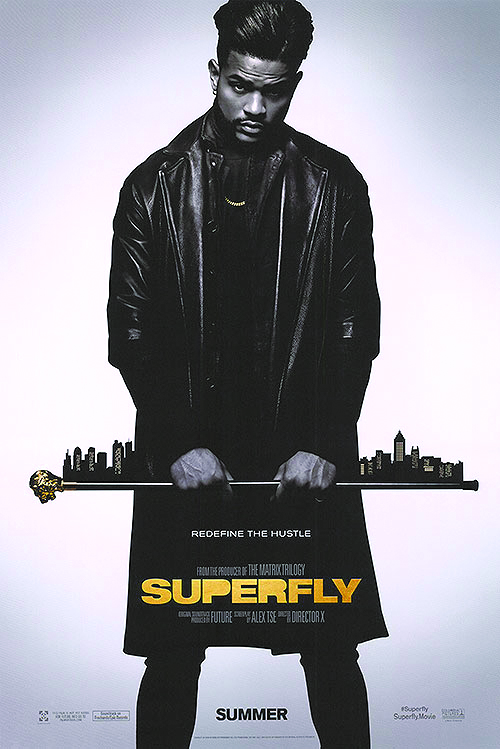 Behind the Screen, by Kathryn Whitney Boole| “Superfly” is a striking movie and compelling story in which the world depicted at the beginning will change before the end. The tale follows a young man drawn into the realm of drug deals, who just wants to get out – to do “one last score so big, we will never have to look over our shoulder again.”

The story of Superfly is based on the 1972 legendary film “Super Fly”, which was shot in Harlem and the East Village in New York. The current film’s director, Director X, decided that the story translated easily into today’s culture. The 1972 star was Ron O’Neal, a serious actor with Shakespearean training who had won awards for his work on stage, yet was finding success difficult to reach in the film business. An excerpt from a bio of O’Neal describes his performance in the film: “Shot on a starvation budget, ‘Super Fly’ became a surprise box office hit. The gifted actor’s remarkable performance brought a great measure of class and depth to the role, which, if done by a lesser actor could have easily become cartoonish.” “Super Fly” initiated the “Blaxploitation” genre of film, which was never taken as seriously by its contemporary audience as it should have been. O’Neal found it hard from then on to be considered for important film roles because his identity as a performer was so strongly linked to his Super Fly role of “Youngblood Priest.”

The current “Youngblood Priest” is a 21-year-old actor with a similarly impressive theatrical background. Trevor Jackson is a singer, actor, songwriter and dancer who has been acting since he was a child. At the age of eight, he won the role of “Young Simba” in the national tour of The Lion King. Since then he has appeared in television shows, including “Black-ish” and “Grown-ish” in which he plays series regular “Zoey’s” boyfriend. Jackson auditioned twice for “Priest” and was turned down as being too young and “not a big enough name,” so he was shocked when Director X finally offered him the role.

Jackson’s performance, along with those of the other cast members, gives power to this film. Jackson has the soul of someone twice his age and his musical theatre background gives him a pronounced magnetism. Most of the actors in the current “Superfly” do not have extensive experience on film. However their strong portrayals make this movie work, and Director X’s background helming lush music videos infuses the visuals with richness.

Maybe you’ve never been a drug dealer, you have no ties with the cartel and your friends aren’t gangsters. That life does exist, and it’s worth understanding it. One of the greatest values of film is to remove you from your comfort zone and introduce you to environments that are out of your sphere. “Superfly” is a roller coaster experience – it also has the value of taking you into someone else’s world – or perhaps of depicting a world that is closer to you than you like to think.

Kathryn Whitney Boole has spent most of her life in the entertainment industry, which has been the backdrop for remarkable adventures with extraordinary people.  She is a Talent Manager with Studio Talent Group in Santa Monica