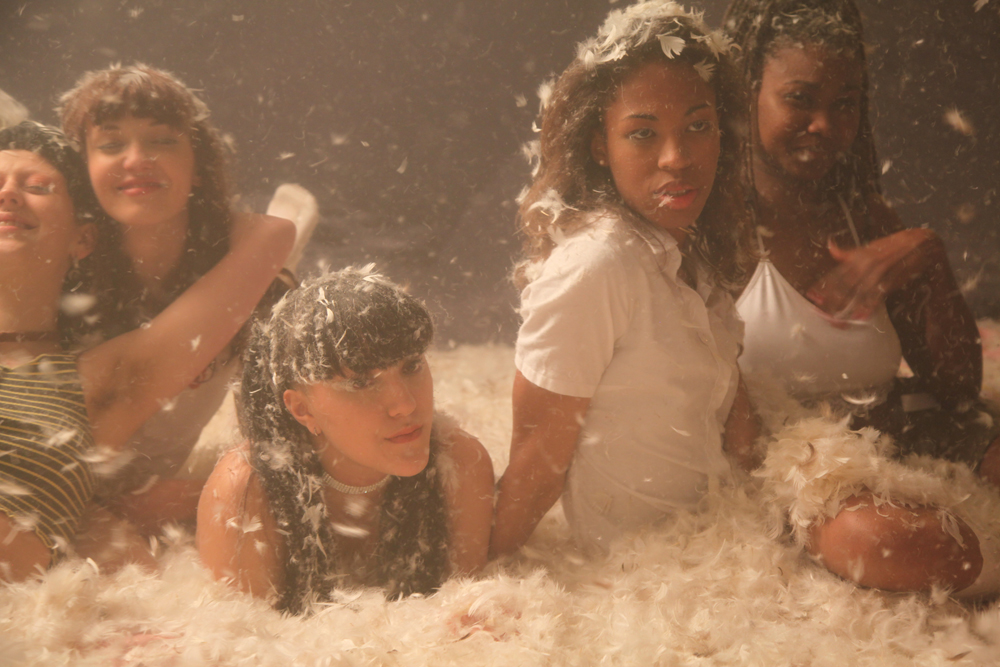 When Bruce LaBruce’s “The Misandrists” came out just in time for this year’s L.A. Pride, we knew it was going to be one of the most important queer films of the year. Focused on a group of proudly violent feminists who are fed up with the patriarchal order, “The Misandrists” puts actor Kita Updike front and center as Isolde, a woman in a feminist terrorist cell who must make a controversial choice.

We caught up with Kita to talk about her breakout role, and the possibility of a feminist future.

Tell me a bit about how you learned about the film, and about Bruce’s work.

I am a bit obsessed with trans, drag, and queer history in that order! Aha! While researching one of those subjects Bruce’s name and work had surely come up. Though I had never fully seen his work before that, I was familiar with the importance of his work through things I had read. At that moment I knew it was something I wanted to be a part of as he had been a part of the queer film history I had enjoyed, and I could possibly have my own little piece of that. He had put out a casting call, as they were still searching for the role of Isolde, so I figured I had nothing to lose!

How did you get into character for this role?

Getting into the role of Isolde was fairly easy, as a lot of the things she is feeling are similar themes to my own experience of being a young trans woman. I have been in the place of searching to be accepted amongst my female cohorts, and that is something I continually have to work on at this particular time in my life. The more satirical bits happened to be quite opposite from who I am so that took a little bit of searching within myself to find.

Are you sympathetic to the character and her struggle, or do you view the story as fantasy?

I am very sympathetic to her particular struggle. As I mentioned before, I see a lot of her in me on some parts. Although the combination of feelings while dealing with transition are personal to the individual, there is a large amount of trans individuals who dealt with the main issues the character deals with in one way or another.

How do you think audiences will respond to “The Misandrists?”

Well… I have had the privilege to see the film during its world premiere at the Berlinale in 2017 a few times with an audience. From that festival alone, there was an immediate backlash against Bruce for making a Feminist film with overriding lesbian themes, as he is neither a woman nor a lesbian. This has caused some of the most popular queer film festivals like Frameline and OUTfest to refuse the show the piece. One of the reasons was complaints of transphobic themes within the film. I personally am not offended by what took places during filming, as I know the vein in which it is intended. I think many times we as people are so overbearing with censorship because they are afraid of missteps or “setting back a movement”. I completely understand that sensibility, but in this instance I find it silly, and not very different from uber-conservative censorship practices. On the other hand, we will have people who get where we are coming from, and they will enjoy that.

How do you think “The Misandrists” relates to movements like #MeToo and #TimesUp?

The film takes an imaginary romp through a timeline where women are taking these issues into their hands violently. It’s ridiculous and it breaks the tension in the room. This is a voice saying what a lot of female-identified individuals have felt for eons about the male population. You watch it, you laugh and then you laugh, and commiserate with what the characters are feeling, and then you move on to more constructive ways of dealing with these issues. It is not a call to arms for lesbo-centric femme misandry as some are thinking… or is it? (Insert cackle here!)

What kind of change (political or otherwise) do you want to see in the next year?

This is a difficult question, as I personally have tried to keep political talk to a minimum recently. I am feeling a bit of burnout from the last year or so. I would say something that I recently have been thinking about is the negligent reforms being made by the US Department of the Interior. State and National parks have already long been suffering attendance for years, as people find other pastimes more stimulating. Proposals such as raising entry fees, and allowing hunters to kill baby bears and wolves are nothing but destructive. When you grow up with a grandfather who hunts for a living and takes you to government-protected parks for fun as a child, you develop a strong appreciation for what they offer. The mission statement of the department is: “Protecting America’s Great Outdoors and Powering Our Future.” It would be nice if they actually started to do this.