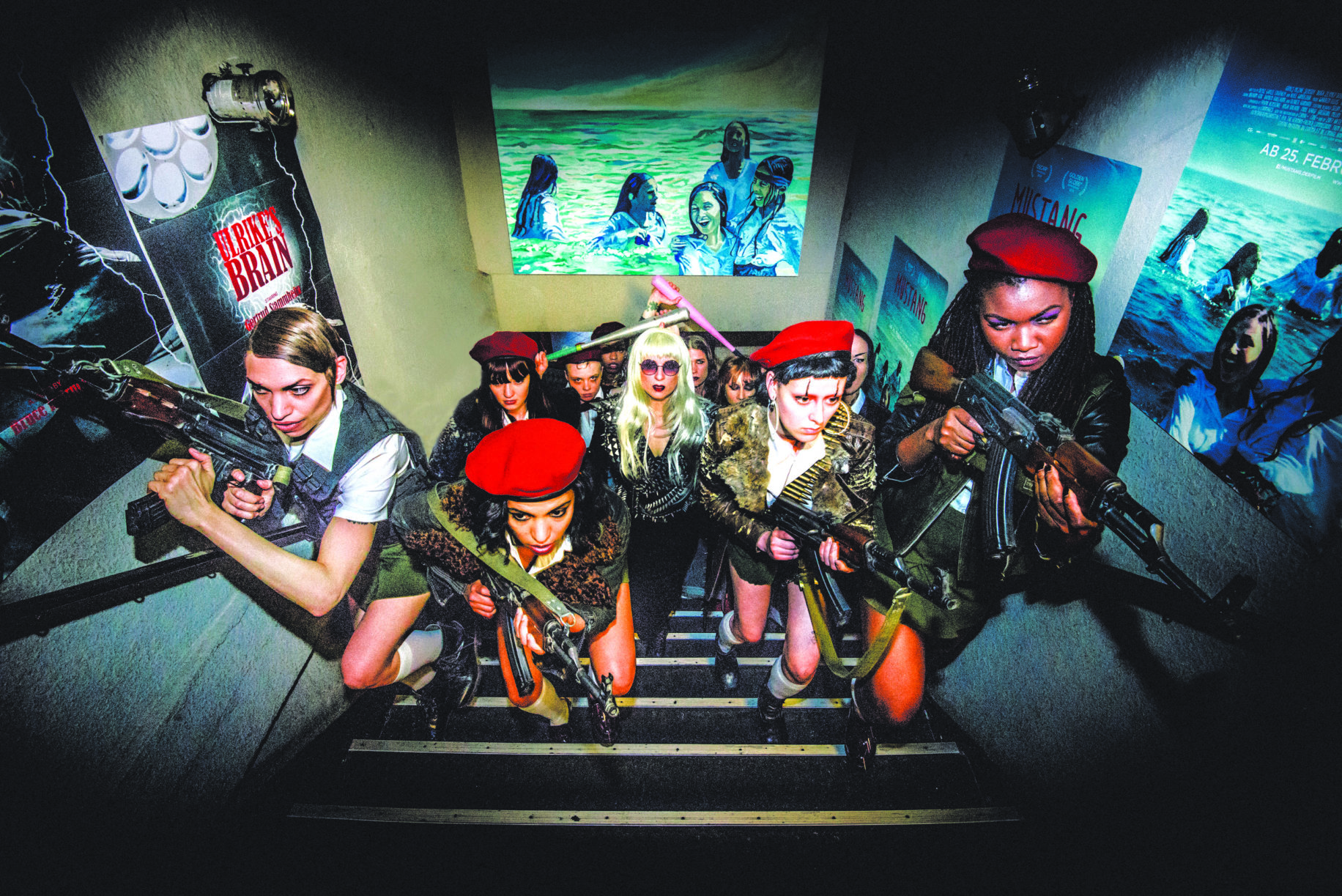 To know the work of Bruce LaBruce, the iconic Canadian director responsible for “Hustler White,” “Super 8 ½,” and “Otto, or Up with Dead People,” is to enter a world of chaotic, beautiful queerness with a dash of zombies thrown in. The filmmaker has been creating work since the 1990s, and his latest effort, “The Misandrists,” a hyper-feminist fairy tale that aims to kick patriarchy in the teeth, his camp-icon status is firmly solidified. “The Misandrists,” described as a “feminist terrorist” film and a “campy feminist satire,” is a kind of SCUM Manifesto on speed: A vision of the world as created by TERFS and Kathleen Hanna-esque punks thirsty for blood. Needless to say, it’s exquisite. We caught up with LaBruce to ask him a few questions about – what else? – toppling the patriarchy.

How long have you been working on the idea of “The Misandrists?”

I wrote the script for The Misandrists at the end of 2015/beginning of 2016, but it’s an idea that had been germinating for quite a while. I studied feminism in University in courses like “Protest Literature and Movements” and “Psychoanalysis and Feminism,” so I already had a solid background in the subject. Some lesbian friends and fans had expressed disappointment that I hadn’t included lesbian characters in The Raspberry Reich, another movie of mine about sexual revolution which came out in 2005, so I had been thinking since then about making a movie about lesbian separatist essentialist feminist terrorists. And I’d always intended to make a film with an almost all-female cast. I wanted to make a film that would pass the Bechdel Test by 1000 percent!

What inspired you to tell this particular story at this moment?

I’ve been hugely disappointed with the Left of late, and how it has responded to the worldwide conservative regression we’re currently experiencing, including the rise of neo-fascism. A certain tendency on the left is to deal with it using “neo-Stalinist” tactics such as the policing of language and desire, and an adherence to doctrinaire or ideologically-entrenched beliefs, and of course, political correctness. I’m also really annoyed by the whole echo chamber phenomenon, the left’s refusal to even listen to those on the left or right who critique them or challenge their positions, to the point of censure. I think it’s important for the left to both develop more of a sense of humour about itself, and to be more auto-critical. The Misandrists supports certain leftist, feminist, and queer ideas, but it also critiques them, pokes fun at them, and challenges them. But the film also advances certain ideas about gender politics and feminism that rarely get discussed in movies.

How does “The Misandrists” draw on (or depart from) your previous work in your opinion?

“The Misandrists” is a bit of a departure for me in several ways. Firstly, I’ve never made a film with an (almost) all-female cast before. I’ve always had strong female characters in my films, but I’ve also often explored purely masculinist worlds, so it was a real pleasure to delve into a feminine universe. Secondly, I’ve never made a movie almost exclusively set in one location before, which was a real pleasure and luxury. We found this spectacular big old house that was built in the 15th Century or something, and we shot everywhere – the attic, the cellars, the grounds, and interiors upstairs and down. It was a remote location, so the main crew actually slept at the location for the duration of the shoot, around 12 days, and the actors were billeted at nearby hotels. It was very cold in the early spring, and there were only coal ovens to heat the huge house, so there was an element of endurance art to the shoot, and it caused the cast and crew to bond very strongly. The Misandrists is a companion piece to my film The Raspberry Reich, which was also an affectionate critique of the radical left, but it’s very different in terms of style and genre.

Do you see “The Misandrists” as pure fantasy, or do you hope it will mobilize audiences?

I think “The Misandrists” is fantasy in the way that “The Handmaid’s Tale” is fantasy: it may seem far-fetched, but it touches on lot of social and political tendencies latent in culture that could erupt or even come true. The film isn’t meant to be activist in any conventional sense, but it certainly does encourage women and transgender people, or any oppressed group, to express their rage and frustration. In the tradition of B-movies, it is meant to tap into these unresolved or repressed feelings and activate or invigorate them.

Do you view the film as being overtly political?

I don’t think I’d call the film itself overtly political. The characters are overtly political, and they articulate their politics quite directly in the film. Big Mother is very explicit about her political feminist position when she declares, “equal participation in an iniquitous society is incommensurate with womancipation.” She rejects post-feminism, the strategy of women gaining power in the existing patriarchal system without addressing the corruption an injustices embedded in that system. But the film itself is more of a polemic. It’s an affectionate critique of aspects of feminism and the radical left, but the overall tenor of the film is pro-feminist. However, because it remains ambivalent and ambiguous about its subject, it leaves the audience with more questions than answers.

What kind of audience response do you hope for with this film?

I hope people are entertained by it, or even inspired by it, but I also hope it sparks debate and even anger. Walk-outs are always welcome.

What’s next for you?

My next feature film, which is in the process of financing, will be a modern retelling of the Narcissus myth set in the early seventies called “Saint-Narcisse.” I’m also threatening to make a sequel to my movie “Hustler White!”