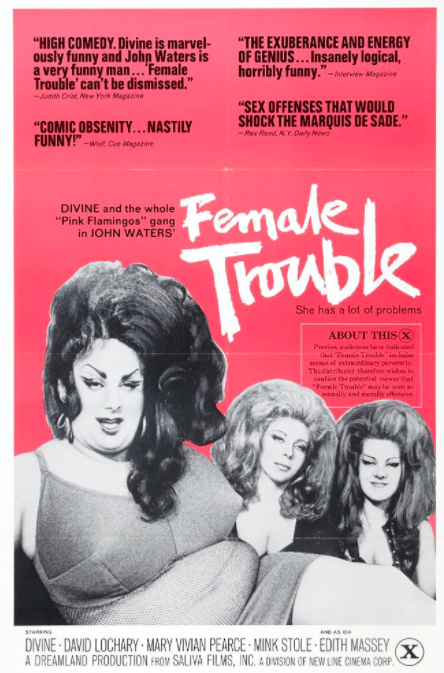 When a young woman in the prime of youth is forced to deal with the reality of a life lived on the straight and narrow (emphasis on “straight,”) she takes what solace she can by engaging in a triumphant life of crime.

John Waters’ camp classic “Female Trouble” isn’t often listed alongside other cult classics like “Pink Flamingos” and “Cry Baby” as one of his greatest hits. But that’s all about to change, thanks to a new Criterion Collection re-release of the 1974 classic this June. Waters’ Manson-dedicated masterpiece centers around Dawn Davenport, (played divinely by Divine) a woman aching to be criminal, famous, and filthy. When “Female Trouble” first hit theaters, it was advertised as a “new high in low taste.” And while it didn’t carry with it the cache of later box office hits like “Hairspray,” it did come with a cast of John Waters stock characters including Edith Massey and the fabulous Mink Stole.

“To me, bad taste is what entertainment is all about,” John Waters wrote in his 2005 book “Shock Value.” “If someone vomits watching one of my films, it’s like getting a standing ovation… Good-bad taste can be creatively nauseating but must, at the same time, appeal to the especially twisted sense of humor, which is anything but universal.”

In this era of bad-bad taste (as evidenced by Trump’s White House Presidency,) the idea of perverse art is more powerful than ever. And if there’s anything “Female Trouble” can teach us more than 40 years on, it’s that “The world of the heterosexual” is still, as Divine herself said, a “sick and boring life.”

“Female Trouble” will be available from Criterion on June 26.