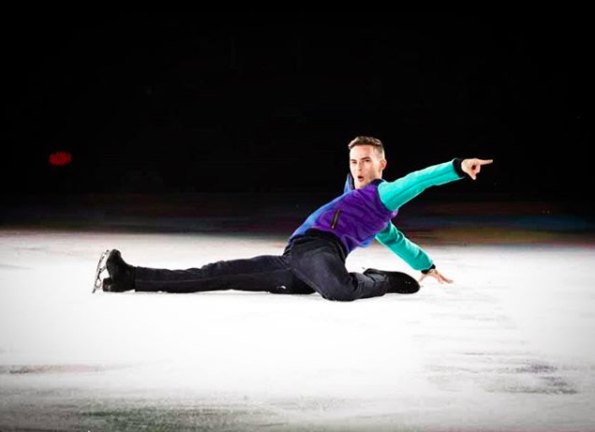 If you’ve been following Adam Rippon’s Twitter for the past few months, you’ll already have a sense of the rising figure skating superstar as a man who keeps receipts.

After coming out in 2015, four years after queer figure skating trailblazer Johnny Weir announced what the world already well knew, Rippon started gaining the attention of mainstream gay media as one of the first out gay competitive skaters in line for an Olympic win. The 28-year old Pennsylvania-born L.A. transplant caught everyone’s attention on the ice, where his graceful moves and elegant costumes distinguished him from the competition in the U.S. Figure Skating Championships earlier this year. When we learned that he was the first out gay athlete to qualify for the 2018 Winter Olympics, we wanted to know more.

And then, he started showing us who he was, 140 characters at a time.

A brief perusal of Rippon’s Twitter page show GIFs of him shoulder-dancing in a sparkly unitard (#FridayMood,) pics of him posed saucily in a shower, naked from the waist down, and a couple of selfies with renowned drag queens who he credits as his inspiration, in part. And those are just the images. When it comes to sick burns, you can’t get much sassier than Rippon when he’s on a rip:

“I was recently asked in an interview what its [sic] like to be a gay athlete in sports. I said that it’s exactly like being a straight athlete. Lots of hard work but usually done with better eyebrows.”

“I described myself as “a little trashy and a little fun” to the Associated Press. I bet my mom is proud.”

And of course, there’s his reading of Mike Pence, which is, to be sure, epic. When Rippon announced that he would decline an invitation to Trump’s White House if invited, he stood by his convictions, citing reasons why Trump and Pence’s administration stands directly in the way of his own progress as a queer American, athlete, and a human being. When Rippon quoted Pence suggesting to Congress that it oppose protections for LGBTQ+ individuals, the skater gained queer icon status overnight.

“I personally have nothing to say to Mike Pence. Given the chance to talk after the Olympics, I would want to bring with me people who’s [sic] lives have been hurt by legislation he has championed.” Rippon tweeted on January 20. “The VP has had little effect on my own life. I didn’t speak up for myself, I spoke up because it’s important to give a voice to those who feel they don’t have one.”

Even if his eyebrows hadn’t won our hearts before, his words alone are enough to launch him toward divinity.