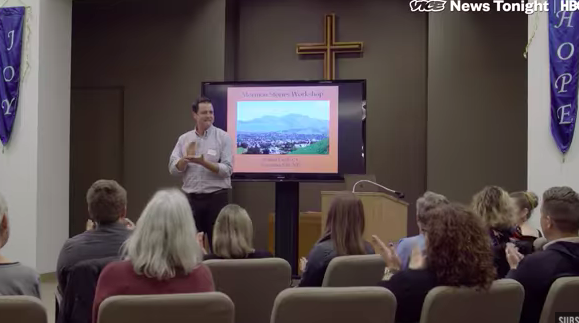 In the life of any religious person, there’s bound to be a moment where the tenets of faith come up against the complications of reality. For LGBTQ+ practicing Mormons and their families, this moment tends to come sooner rather than later. When living within the restrictive mandates of a church that does its best not to grow and change with the times, how do you remain faithful to your religion while living the life that you want (and need) to live?

For many Mormon parents, like Diane Oviatt, whose son came out as gay a few years ago, the only option is release. In a Vice News segment from January 5, correspondent Nigel Duara interviewed Oviatt, as well as other self-described “refugees” from Mormonism, to find out how LGBTQ+ worshippers and their families can balance their religious and personal identities, if at all.

For many, leaving the church is the only option. Others, however, choose to stick it out despite complications. Oviatt founded Mama Dragons, a support group for parents of LGBTQ+ children in the Mormon community, to figure out ways to balance faith with a modern, accepting approach to LGBTQ+ identity. While many older Mormons agree with the official stance of the church, which encourages celibacy in LGBTQ+-identified church members, younger members of the religion are experiencing a sea change in how they think about sexuality within the church, according to a Public Religion Research Institute poll from last year. With changes in the attitudes of church leaders to LGBTQ+ acceptance, including a two-year-old policy that forbids out LGBTQ+ Mormons and their children from attending services, many queer congregants are choosing to leave the church behind. Although the Mormon church’s intolerance has led to a rash of LGBTQ+ suicides within the faith, the religion itself stays firm on this position. The church has even targeted “Mormon Stories” podcast host John Dehlin for advocating for LGBTQ+ rights within the church.

Whether or not the new generation of younger, more tolerant Mormons will change the religion’s stance on LGBTQ+ rights in the coming decades is a matter of speculation. With more and more individuals abandoning the church in search of more accepting communities, the result may just mean a drastic decline in numbers for the Mormon faith.