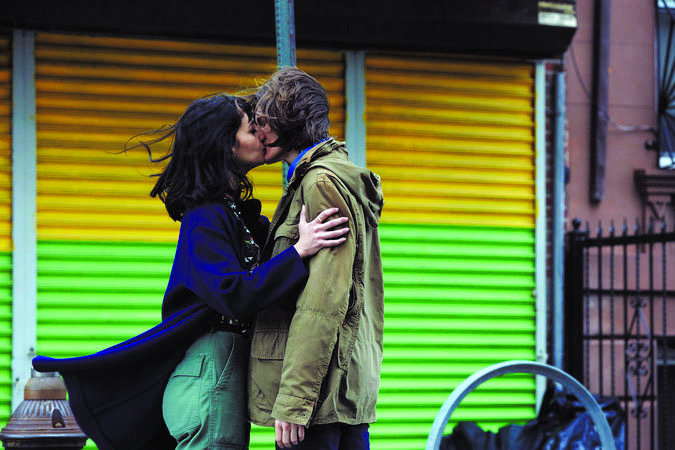 If you’ve ever been a member of or visitor to the Park Slope Co-Op in Brooklyn, you were  probably able to sense what unspeakable dangers lurked beneath the cheery, somewhat worn facade of the happy shift workers and bright green produce. Even as happy co-opers frolic among the aisles, delighted with their at-cost faux gras and cashew cheese, something seems to be just a bit…off. The other shoe has to drop: It’s only a matter of time.

Those of you who are already familiar with filmmaker Ingrid Jungermann’s work via her two web series “The Slope” (which she created with Desiree Akhavan) and “F to 7th,” will find this hippie-crunchy ominousness a familiar theme. The questions Jungermann has been asking through her output of roughly the past decade all circle around the idea of a bourgeois lesbian culture – equal parts sinister and absurd – with something to hide. It’s not just the terse rejection of the gift of a ‘realistic’ dildo at a wedding shower or the tight-lipped insistence on the sanctity and superiority of co-op produce that becomes utterly comical in Jungermann’s hands. It’s the very idea of mating, trusting, and co-existing that falls under comic speculation in her first feature-length film, “Women Who Kill.”

Jungermann’s film debut isn’t a far departure from her past work in terms of setting and characters. Like “The Slope” and “F to 7th,” “Women Who Kill” features a lovable cast of mumblecore lesbians and Park Slopers alike who talk shit, look out for each other, and shout encouragements like “pound that pussy!” from the dugout at softball games. Unlike Jungermann’s previous work, which were strictly comedies of manners, “Women Who Kill” revolves around a tantalizing murder plot. Well, not exactly tantalizing, and not exactly murderous. It’s more the suggestion of murder that gets under the skin of our hero Morgan, played by Jungermann herself, who has to decide whether finding out her girlfriend is a serial killer is more of a dealbreaker than realizing that the relationship actually requires her to open up and need something from someone else.

Together with her ex-girlfriend Jean, Morgan runs a podcast called “Women Who Kill,” which explores female serial killers and true crime. Though the two exes still live together and produce work together, they ended things on a rather sour note, mainly due to the fact that Morgan can’t handle vulnerability in herself or in others. This doesn’t stop her, of course, from entering into a new relationship with Simone, the new girl at her co-op whose air of mystery provides a perfect cover for her tantalizing lack of backstory.

Jean, however, thinks that Simone might be killing people in the Slope (Fort Greene, too.) When she calls Morgan out on it, she receives the swift rejoinder: “I’m not in danger, I’m just in love.”

And here we find our main motif. Is love more dangerous than murder? In the world of “Women Who Kill,” possibly. The delicacy of this theme, and how Jungermann paints relationships as these perilous, life and death entrapments, is what gives beauty to the abnormally slow pace of the film which, for a murder mystery (and even for a comedy) is set at a speed that might feel dead and lagging for any other feature. In “Women Who Kill,” it’s a brilliant way to get us to stop and think, to see how quickly relationships are fallen into and how much more quickly love can be fallen out of. More importantly, it situates the world of “Women” firmly within the viewpoint of its complex main character, a woman enticed by the idea of love but terrified by its reality. For a someone reaching out into the void with the expectation of being greeted by a happy, uncomplicated love, the most bone-chilling eventuality is to feel someone else, a real person full of needs and fears, reaching back.