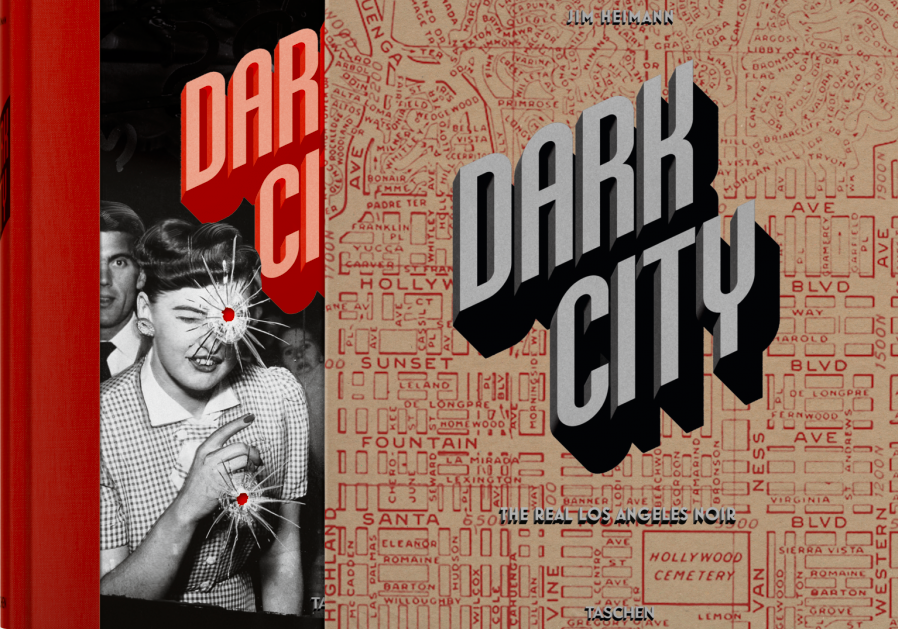 Men in hats and trenchcoats standing over a crime scene. A shady femme fatale with something to hide. A body by a river. No matter how many times you see the same succession of images straight out of a ‘40s noir, it never stops feeling like the essence of truth when capturing the good old days of a crime-ridden, scandal-saturated L.A., simply bursting at the seams with controversy, murder, secrets, and lies.

This uniquely Angelean concupiscence for crime is, happily, the subject of a new book from Taschen, set for release on December 20. “Dark City: The Real Los Angeles Noir” is writer and Taschen Executive Editor Jim Heimann’s glossy look at the gangsters and scandals that made up old L.A. in its golden age of crime, from roughly 1920 to 1950. Starting in the silent era of the 1920s, a decade defined by screen star scandals with cocaine, rape, and murder, Heimann goes through all the crimes and subcultures that defined L.A. in those formative years, when the movie industry and Hollywood itself was still, for most Americans, a town synonymous with unspeakable vice.

Starting in with Roscoe Arbuckle’s controversial rape trial and film star Wallace Reid’s death by speed overdose, “Dark City” breaks apart all the elements that made early L.A. a perfect den of vice. Hollywood women of loose morals and men with questionable ethics? Check. Queer film stars living closeted lives and dying shocking deaths? Check. Sex murders like those of the infamous Black Dahlia and Thelma Todd redefining the idea of the femme fatale? Check and check. Heimann’s tome covers corruption within the LAPD starting from the ‘30s onward, while laying out all the ways in which Hollywood culture gave the city its reputation for being a dark, desperate underworld that was still a highly desirable place in which to live. “Dark City” discusses the crimes that served as inspiration for some of the best L.A. noir films, like the adaptations of the L.A. crime writer James M. Cain’s “The Postman Rings Twice” and “Double Indemnity,” along with Roman Polanski’s “Chinatown” and Curtis Hanson’s “L.A. Confidential.”

Heimann doesn’t just stick to the script when it comes to L.A.’s many-checkered history. In addition to the stories everybody knows, “Dark City” delves into a few deep cuts, like the story of the cult of husband-and-wife con artists Guy and Edna Ballard, who created a “Church of I Am” and offered to save lost souls in return for “love offerings.” He also dips (if slightly) into the world of queer controversy in old Hollywood, where top-billed stars like William Haines and Ramon Novarro had to live undercover lives and present as straight for the cameras to avoid scandal.

L.A. has never been a city to shy away from the grotesque, the obscene, the licentious and the depraved. That’s why so many of us love it so dearly. Even during the high point of L.A.’s crime streak, the city has stayed true to the loners, the drifters, the queer folk and the glamorous denizens of the city who will never tire of living in its dark, deep shadows.