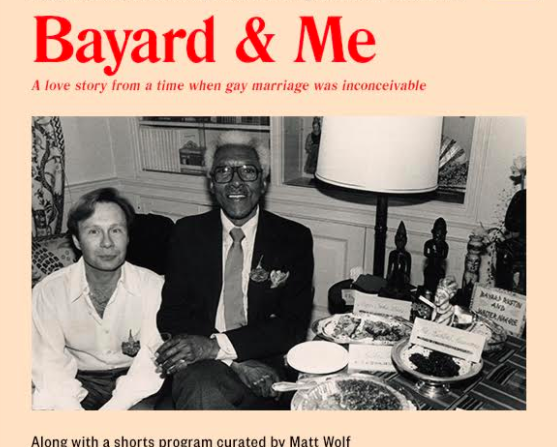 “I was headed to Times Square,” Naegle told NPR’s StoryCorps in a 2015 interview. “We were on the same corner, waiting for the light to change… He was of my parents’ generation. But we looked at each other and lightning struck.”

This was in the 1970s, before the AIDS epidemic devastated New York, and far before the question of gay marriage had come onto the national stage though the two were separated in age by more than 30 years, they would end up helping the relationship more than hurting it. When Rustin and Naegle talked about their future, adoption came up as an alternative to legal marriage.

“He was concerned about protecting my rights,” Naegle said, “because gay people had no protection. At that time, marriage between a same-sex couple was inconceivable. And so he adopted me, legally adopted me, in 1982. That was the only thing we could do to kind of legalize our relationship.”

Strange as it might seem today, it wasn’t too uncommon for gay couples to go the adoption route in order to make sure their partners would be taken care of and seen as legitimate family by the government. But Bayard Rustin, as with most things he put his mind to, served as a gay marriage pioneer simply by making sure his young partner was looked after.

Up until the end of his life, Rustin was fighting for gay rights. In 1986, only one year before his death, he fought for New York State’s Gay Rights Bill, proclaiming in a speech that: “The question of social change should be framed with the most vulnerable group in mind: gay people.”

Filmmaker Matt Wolf, whose previous projects include 2016’s “The Face of AIDS” and 2010’s “Another Portrait of Jason,” has chosen Rustin and Naegle’s relationship as the subject of his new film, “Bayard and Me.” The Outfest and Sundance hit had its L.A. premiere on October 19, with Wolf and Naegle in attendance. Naegle is now in his late 60s and has dedicated his life to honoring his partner’s legacy and continuing his fight.