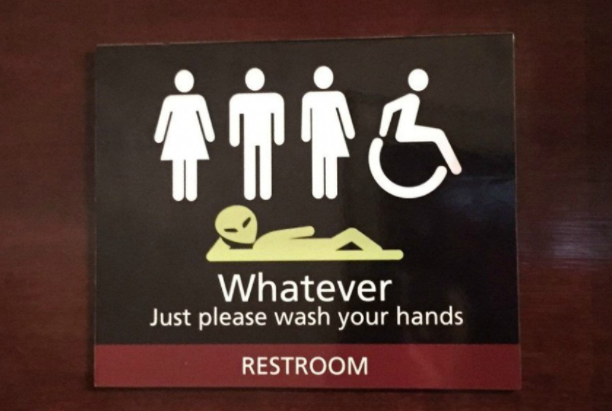 If you ever needed an excuse to visit scenic New Zealand (apart from the Lord of the Rings movies and kiwi birds) look no further.

The Regent Theater in Dunedin, NZ, had theatre director Sarah Anderson design a brand-new, gender-neutral bathroom sign that really and truly takes the cake. Late in March, the sign went live, and the Internet voiced its wild approval:

The Regent Theater marketing manager, Hannah Malloy, explained that the sign was meant to diffuse tension and fear for gender nonconforming and nonbinary folks:

“It takes any anxiety away for people who might feel pressured into going into toilets specified for one gender, or another, when they don’t necessarily relate to that gender.” She told the Otago Daily Times.

The folks at the Regent are definitely on to something. Rather than ignoring the fear, shame, and all-around complicated feelings that might arise from being faced with a genderless bathroom, they’re opting to break the tension by using the oldest (and most effective) trick in the book: Humor.

We can only hope the States catch on to this method sooner rather than later.